Sometimes God uses dramatic means to change people’s hearts. Other times, He moves in the small stirrings of the soul or in little nudges from His faithful on earth. Laura Van Roessel heard Him in the latter, leading her to finally say “yes” to accepting Him through the Catholic Church.

Baptized and raised Lutheran, Van Roessel had a stereotypical view of the Church for many years. Even while dating her now-husband Joris, who was raised Catholic, she had her doubts. “The stigma around Catholics is strong and sometimes real,” Laura said. “I had every preconceived stereotype of Catholicism.”

Post-college work with the John Deere company allowed the Northeast Indiana resident to travel westward. It also gave her the opportunity to explore various other Christian denominations. But when she moved back to Indiana, Joris decided their relationship was serious enough to begin going to church together. Although there were some initial compromises, Joris began taking her often to St. Michael the Archangel Parish in Waterloo. She also liked the priest, so she agreed to settle down and worship at St. Michael.

The couple had been established at St. Michael for two years when they decided to get married. Going through marriage preparations with Father David Carkenord was the beginning of the end of Laura’s previous objections to Catholicism. She described him as “awesome,” stating, “He started to break down some of my Catholic mental barriers. He didn’t treat me differently because I wasn’t Catholic.” In her point of view at the time, though, the Catholic Church was still “a hard church to walk into and feel at home and a part of, because there are so many things that are unique to the Catholic faith.” 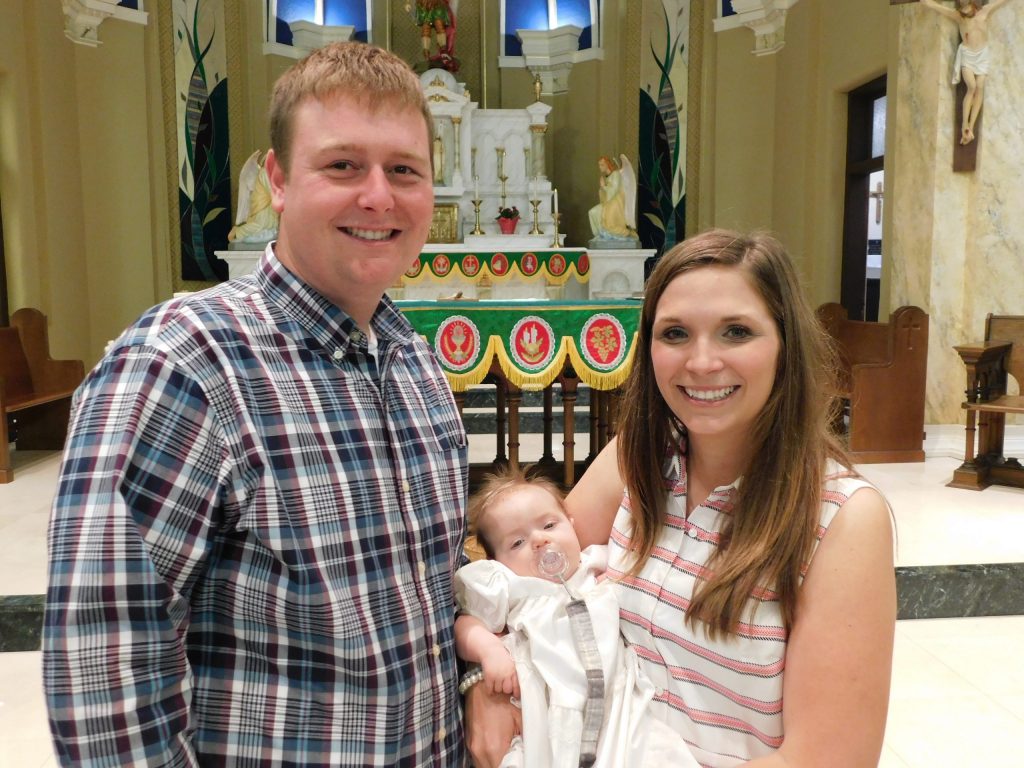 When the couple wanted to have children, they turned to Dr. Christopher Stroud’s Fertility and Midwifery Care Center to learn about the Creighton Model of natural family planning. There, Laura felt more nudges toward Catholicism. She found learning about the “Theology of the Body” fascinating and wished that the beauty of the female body had been taught in her younger years. Her Creighton instructor was also Catholic. Laughing, Laura said, “I felt like everywhere I was running into Catholics.”

When their daughter, Rebecca, was born, it was an obvious decision to have her baptized at St. Michael. Since none of Laura’s family members were Catholic, she chose as godparents a close friend from college, Alisha Schwertner, and her husband. Her friend had married into a devoutly Catholic family and converted to her husband’s faith. Schwertner had already begun evangelizing Laura through numerous conversations over the phone.

“For the last five years, we’ve been having these conversations,” Laura said. “She’s not been pushy, but says things like ‘I think if you would open your mind a little bit to this, you might enjoy it.’ And she’s been really supportive.” So supportive, in fact, that when Laura decided to take the leap and join the Catholic Church, Schwertner was her sponsor.

Schwertner teased her by saying that it had been just a matter of time, and that she didn’t know what had kept Laura from joining the Church earlier.

Listening to “The Catholic Feminist” podcasts, reading a book called “Waking Up Catholic” and a phone call from the director of religious education at St. Michael finally helped her overcome her hesitancy to begin preparation classes for the Rite of Christian Initiation of Adults. “There’ve been enough nudges in that direction that I needed to say yes.”

Laura is the only candidate for full communion at St. Michael this year, “which at first was very intimidating, but we have some very open conversations because you can’t hide in the back.” The process has given her a greater appreciation for the teachings of the Church and the aspects of the Mass that she once found confusing. “When you look at the Catholic faith, it seems like they do a lot of silly things, but when you understand why they do that it’s like ‘oh wow.’ Everything has a purpose.”

RCIA class continued to topple her preconceived notions about the faith. She learned more about the things she had previously questioned. One element she had not understood was the uniformity of the Catholic Mass, or lack of “originality,” as she put it. Now she accepts the Mass as “perfect,” and appreciates that it is an experience shared across nations throughout the world. Her sponsor lives in Texas, so there was some concern about the distance, but due to the universal nature of the Mass, that was easily overcome. Laura said, “We experience the same Mass … we are unified in the Body and Blood of Christ.”

Another barrier had been the beauty of Catholic churches and the opulence of some of them. Now she understands that “it’s because Jesus is there.” She also understands that while a beautiful church isn’t necessary to worship God, the presence of Jesus in the Eucharist calls for an environment that shows Him honor.

Even visiting the type of parishes that Laura used to frequent feels vastly different to her now. “If they understood what Catholics believe about the Eucharist, I think a lot of things would fall into place. It’s what makes Catholics different. It’s not a symbol. It is not just bread and wine … [the Mass] is more solemn and purposeful, because the Eucharist is served there.”

Laura’s demeanor appears energized when speaking about the traditions of the Catholic Church. She is excited to receive the Body and Blood of Christ at Easter Vigil, and to become a full member of the Catholic faith.