Bill King never thought much about faith while he was growing up.

“I believed in God but didn’t have a strong conviction in a specific religious belief,” he shared. “I would feel things and attribute them to something other than God, then go my own direction. Sometimes when I did go to church, I’d get a thought that I needed to listen to and follow God, but I blew it off and rationalized it as something else. I got easily distracted with life, even while I was praying.”

King’s parents didn’t talk that much about God or religion. No one in his home thought church attendance was necessary, he recounted. His father once shared that he attended church every Sunday as a young boy, but as a family, they only went together occasionally.

When King was a little older, he recalled his mom getting baptized, but he doesn’t have any recollection of a specific denomination that appealed to them. 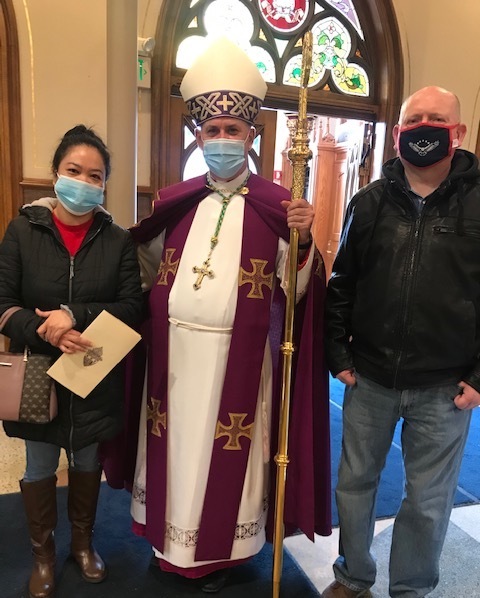 Provided by Bill King
Bill and Catherine King meet Bishop Kevin C. Rhoades following the Rite of Election Feb. 21 at the Cathedral of the Immaculate Conception, Fort Wayne, at which Bill affirmed his intention to practice the Catholic faith. He will join the Catholic Church at the Easter Vigil in his home parish of St. Bernard, Wabash.

One of King’s good friends growing up was a Baptist minister’s son. The family frequently invited him to join them on Sundays for worship service and King accepted most times. He attended church with them often, up until the age of 13.

“At that point, I rebelled and didn’t feel I needed to continue attending church.”

King joined the military after high school. He tried attending different Protestant services from time to time, but nothing ever stuck or felt right.

In 1993, he was exposed to Islam after being sent to Saudi Arabia during service in the U.S. Air Force.

“This made me realize that Muslims, while acknowledging Christ as a prophet at most, are very ritualistic in their prayer structure and worship. I knew there was a deeper meaning to God’s existence and wanted to find out what it was,” he remembered.

This was another small step toward his decision to enter the Catholic Church. He realized how much freedom there is in Christianity, for different expressions of spirituality and formats of prayer. He appreciated that there are a variety of ways to pray, such as spontaneous prayer or something more structured, like the rosary.

To King, Catholicism didn’t seem as rigid in its religiosity as other major world religions. He began studying the history of religions, reading about different faiths and watching historical documentaries, including a history of the Catholic Church.

Because King’s wife is Catholic, he decided to attend Mass with her.

“I felt comfortable – more so than in other churches – at Mass,” he shared. “It felt very much like the right place to be. I knew I was in God’s presence.”

A turning point in King’s faith journey occurred when his 4-year-old daughter was born.

“I wanted to be a good example for her. At that time, I started talking to God about my life. This was when I started opening up my heart to Him. Her life felt like the biggest blessing, so I started paying more attention to what really mattered,” he said.

What initially attracted King to the Catholic Church was the liturgy, because it was consistent in Catholic churches around the world. He had been confused at the different denominations of Protestantism, with their various messages and formats.

The Catholic Church felt unifying to him. He could worship at Mass in Indiana, but he could also travel to France and know he was attending the same Mass.

“There is a sense of inclusion in Catholicism,” he said.

He remembered a particularly special Palm Sunday when he was stationed in Arkansas with his family.

“During Mass, the priest was doing the Rite of Sprinkling with a palm branch. When he sprinkled me, I felt something in my heart, an overall sensation of welcoming. I was overwhelmed with joy. It was almost like God was welcoming me back, welcoming me home.”

After the experience in Arkansas, King started praying more regularly and listening to God. He felt God’s presence more often than before. Though he still wasn’t yet attending Mass every Sunday, he continued to feel an overwhelming pull toward the Catholic Church. It seemed the Holy Spirit was speaking to him.

“[At the beginning of the pandemic,] I kept asking God what direction I should go, and I watched videos on YouTube about Church history, from the beginning of the establishment of Christianity through the current, modern day,” King shared. This helped clarify for him some of the debates Protestants and Catholics have about baptism, such as full immersion versus sprinkling. He began to study Catholicism even more.

“I love the idea that Catholicism encompasses everything,” said King. “Other faiths tend to only focus on a personal relationship with Jesus, but they ignore prayer to saints and angels. The Catholic Church encompasses all of these spiritual elements.”

He decided to formalize what he believes was a call from God. King will receive the sacraments of initiation — baptism, first Communion and confirmation — at the Easter Vigil at St. Bernard Church, Wabash.

King said he has found his family to be very supportive of his conversion to the Catholic Church. He appreciates that his parents never judged a person by his or her religious beliefs or background, and that they feel this step in his life is a worthwhile endeavor.

“I am most looking forward to the sense that I will be included as a new family member, and the unity in the liturgy,” he said. He also looks forward to exercising the call to serve others through becoming involved with a particular ministry.