The diocese, in a report posted on its website, said that only one of six Catholic schools reopened Aug. 31, while the others needed at least some repairs before classes could resume.

The storm slammed southern Louisiana with winds of up to 150 mph in the early hours of Aug. 27. It left a diocesan rectory housing 20 priests, a third of them in active ministry, uninhabitable. 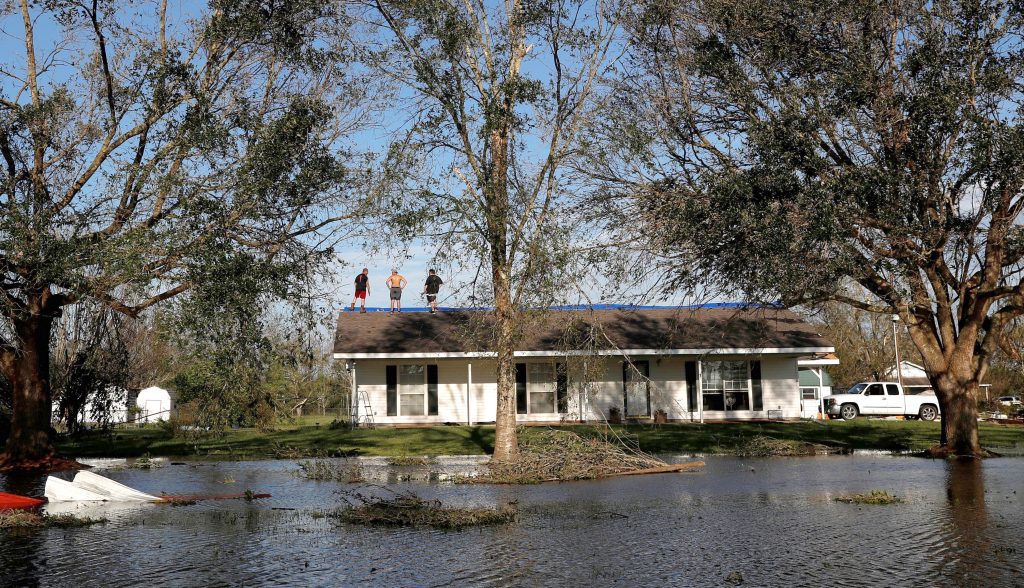 Some of the priests were able to relocate to rectories that sustained little or no damage, while others moved into Vianney House, a diocesan residence for people discerning a vocation, the Cathedral of the Immaculate Conception in central Lake Charles and private homes.

Utilities, including power and water, in much of the region remained out Aug. 31.

The devastation was widespread, according to Bishop Glen J. Provost, bishop of the Lake Charles Diocese.

The roof of the chancery collapsed during the storm, leaving the building unusable, and a diocesan building across the street from the chancery sustained minor damage with broken windows from the fierce winds.

“The city is a disaster. No houses, no business is left untouched. The chancery will be unusable in the foreseeable future. We have 39 parishes and seven missions. All suffered some damage,” Bishop Provost said.

Hurricane Laura was the most powerful hurricane to strike southwest Louisiana, surpassing the devastation of Hurricane Rita in 2005 and Hurricane Audrey in 1957, the diocese said. 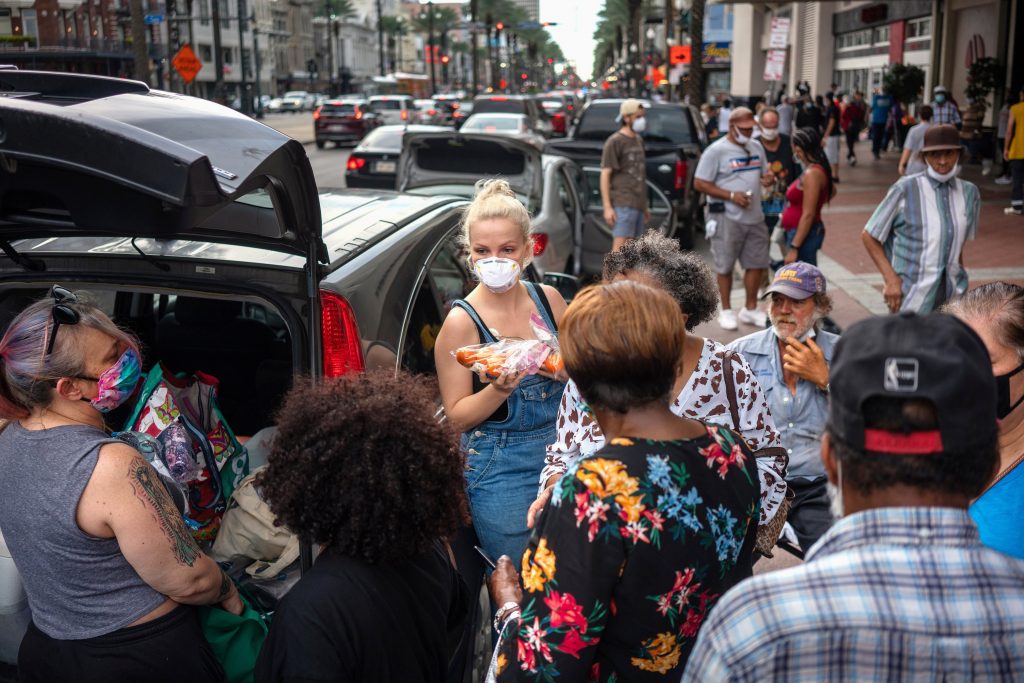 “We are here, we are open and we trying to meet the needs of the community,” the diocesan report quoted Mercy Sister Miriam MacLean, the agency’s director, saying.

“The Lord preserved Catholic Charities from any major damage for sure so that we can be up and operational,” she said. “We have a little bit of leakage in the roof and a couple of roll-up doors got a little damage, but we are blessed. We have a generator and the Religious Sisters of Mercy are running the office.”

The diocese reported that one of its newly ordained priests, Father Joseph Caraway, parochial vicar at St. Henry Church in St. Charles, used a chainsaw to clear a path so the Mercy sisters could return to their convent.

The priest then delivered food to homebound residents in the city, the diocese said.

The Knights of Columbus donated $150,000 to the Diocese of Lake Charles to assist with recovery efforts.

Bishop Provost rode out the storm at a parish in the northern part of the diocese.

“It is extremely important for me to live in my house in the diocese so I can be available to the priests and to the faithful,” said Bishop Provost, who has headed the diocese since 2007. “Some gentlemen from the cathedral parish bulldozed my driveway so that I could get to my house. Every tree in my yard, except maybe three or four, were downed. You can barely see my house from Lake Street because of all the downed trees.”

He reached out and offered prayers to all diocesan churches hours after the storm swept through the area. 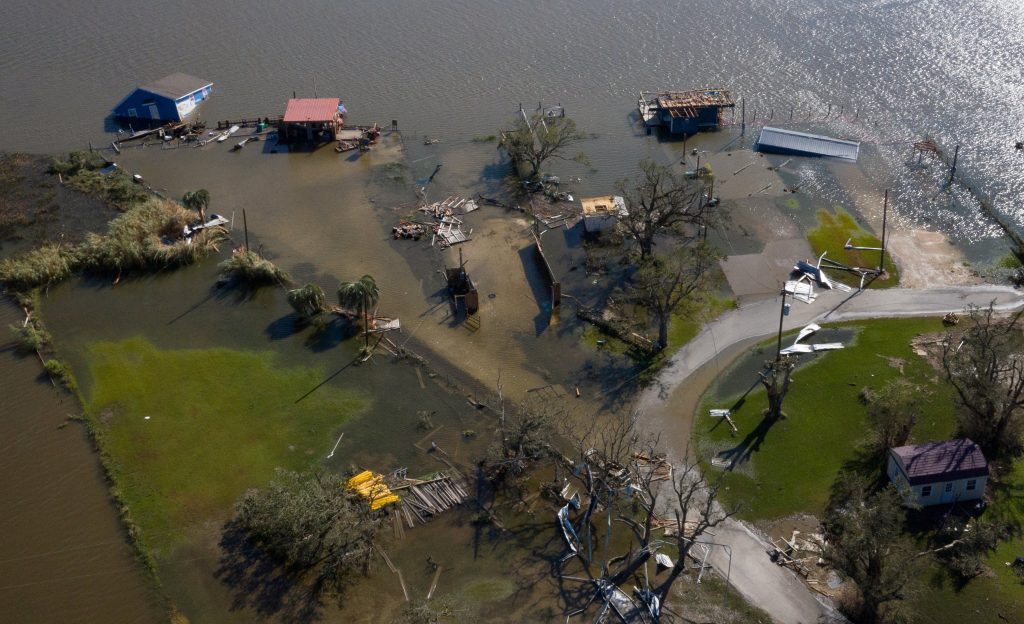 Homes near Hackberry, La., are immersed in water in the aftermath of Hurricane Laura Aug. 27, 2020. (CNS photo/Adrees Latif, Reuters)

“Most of what I have witnessed so far has been wind damage,” Bishop Provost said.

He said Mass will continue to be celebrated when possible throughout the diocese.

“We appreciate everyone’s prayers. Bishops in other dioceses have sent word of assistance to us, so we appreciate the fellowship of the other Catholic dioceses throughout the nation. I have heard from bishops on the East and West coasts and especially in Texas and Louisiana,” he said.

As for the schools, only Our Lady Immaculate in Jennings was prepared to reopen Aug. 31. The diocese reported that Father Keith Pellerin, pastor of Our Lady Help of Christians Church in Jennings, said that classes would resume at the school.

“Father (Nathan) Long, rector of the school, reported that the roof of the administration building is, for the most part, blown off. Windows in various classrooms are blown in and there is roof damage at the gym,” Father Pellerin said.

Bishop Provost spoke with Principal Trevor Donnelly of Our Lady Queen of Heaven Catholic School in Lake Charles, who reported minor damage to the building. However, the adjacent parish church sustained “substantial” damage. The parish rectory’s roof was significantly damaged, making it uninhabitable.

Volunteers were on hand Aug. 30 to clear trees and debris from the parish property.

Bishop Provost plans to visit as many parishes as possible to survey the storm’s impact firsthand.

Catholic Charities planned to distribute food, water and tarps to families in need. Sister MacLean said the dioceses of Beaumont, Texas, and Lafayette, Louisiana, will store donated supplies because her agency’s facility does not have enough storage space.

Bishop David L. Toups of Beaumont, Texas, helped deliver bottled water and also prepared meals to Catholic Charities of Southwest Louisiana despite having to assess storm damage in his diocese to the west. He said the damage in Beaumont was much less severe than in Lake Charles.

Sister MacLean also said people who were evacuated to hotels will need vouchers to remain there until other housing arrangements can be made. Long-term shelter will become a major need for people left homeless by Hurricane Laura, she said.