My brothers and sisters, today, Palm Sunday, we enter into Holy Week. In the Gospel passage at the beginning of Mass, we heard St. Luke’s account of the Entrance of Jesus into Jerusalem. I blessed the palms and we processed into the cathedral, carrying the palms and singing like the multitude of disciples who walked with Jesus praising God with joy, as St. Luke tells us. “They proclaimed: ‘Blessed is the king who comes in the name of the Lord. Peace in heaven and glory in the highest.’”

Jesus’ entry into Jerusalem was indeed a triumphal entry. It was the return of the king, whom the people awaited ever since King David departed from Jerusalem. The Son of David entered the holy city, but He was not only the Son of David; He was the Son of God who entered the city to establish the kingdom of God. 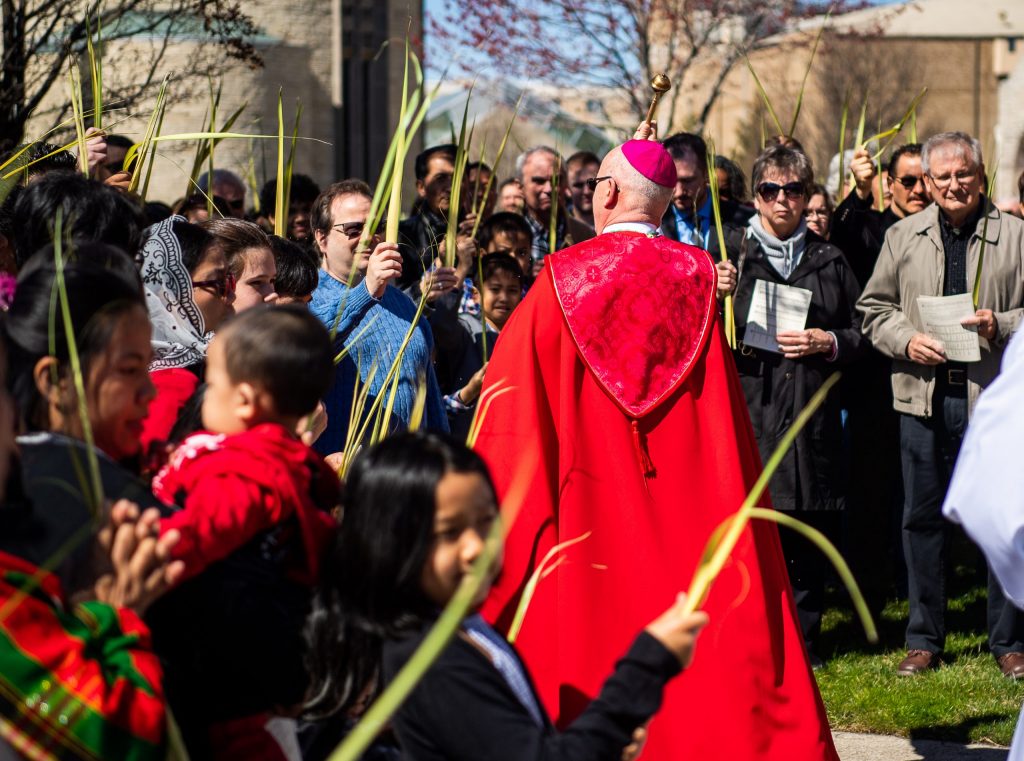 John Martin
Bishop Kevin C. Rhoades blesses palms outside the Cathedral of the Immaculate Conception in Fort Wayne prior to the procession into the church on Palm Sunday, April 10.

Jesus entered Jerusalem to lay down His life for us, to put an end once and for all to sin and death. He did not enter like a warrior to conquer the city with weapons of violence. He did not enter riding on a great and towering horse, but on a small young donkey. The people would have recognized that the prophecy of Zechariah was being fulfilled. The prophet Zechariah wrote: “Rejoice greatly, O daughter Zion! Shout aloud, O daughter Jerusalem! Lo, your king comes to you; triumphant and victorious is he, humble and riding on a donkey, on a colt, the foal of a donkey.” 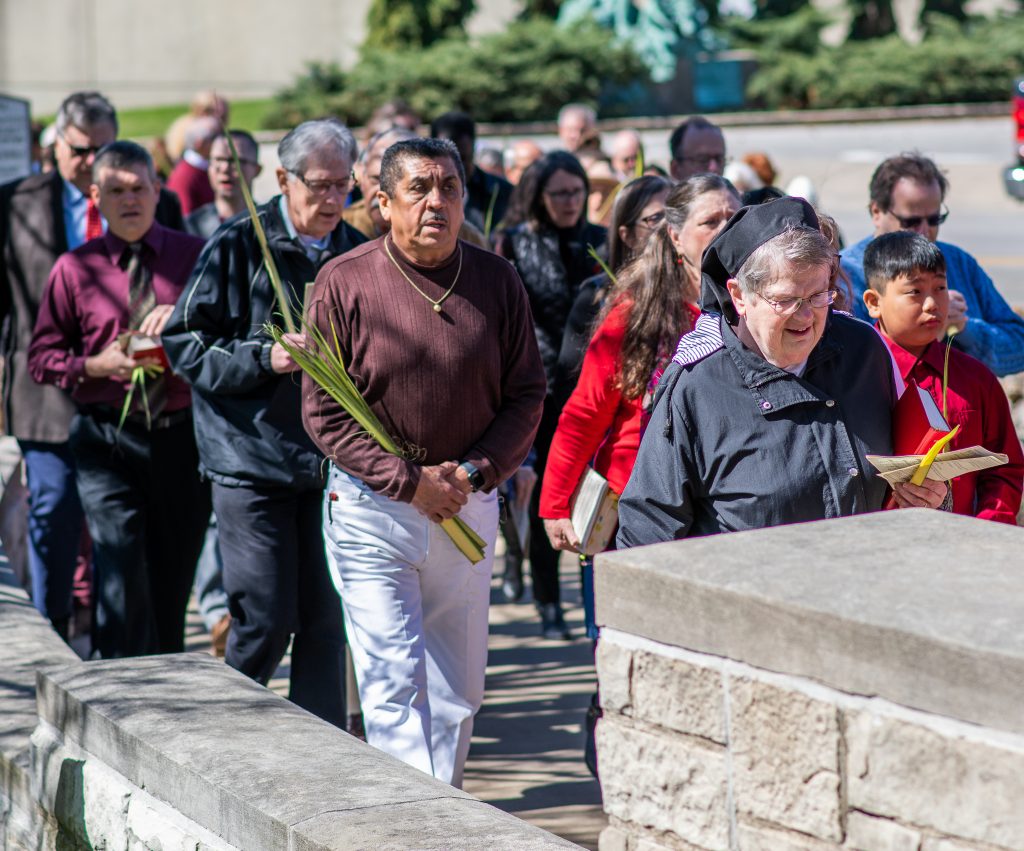 Palms in hand, a man joins the procession into the Cathedral of the Immaculate Conception on Palm Sunday. The procession recalls Jesus’ triumphant entry into Jerusalem before his passion and death.

Jesus entered the city humbly, like He entered the world humbly. As we heard in today’s second reading: “Christ Jesus, though He was in the form of God, did not regard equality with God something to be grasped. Rather, He emptied himself, taking the form of slave, coming in human likeness; and found human in appearance, He humbled himself, becoming obedient to the point of death, even death on a cross.” This is the humility of God – He emptied Himself in the Incarnation – He became flesh – He assumed our human nature, a nature that includes dying. He even accepted a torturous death, the terrible pain and suffering of His passion and death by crucifixion. He did all of this out of love for us, for each and every one of us. He took all of the sins of the world upon Himself and swallowed them up in the ocean of the divine mercy and forgiveness. He was a king unlike any other. And He was victorious unlike any other. This is what we remember this week. Let us enter into this Holy Week with faith and humility. I encourage you to attend the liturgies of Holy Week as we relive the last days and final hours of our Savior’s earthly life, recounted in today’s Gospel of the Passion according to Luke. 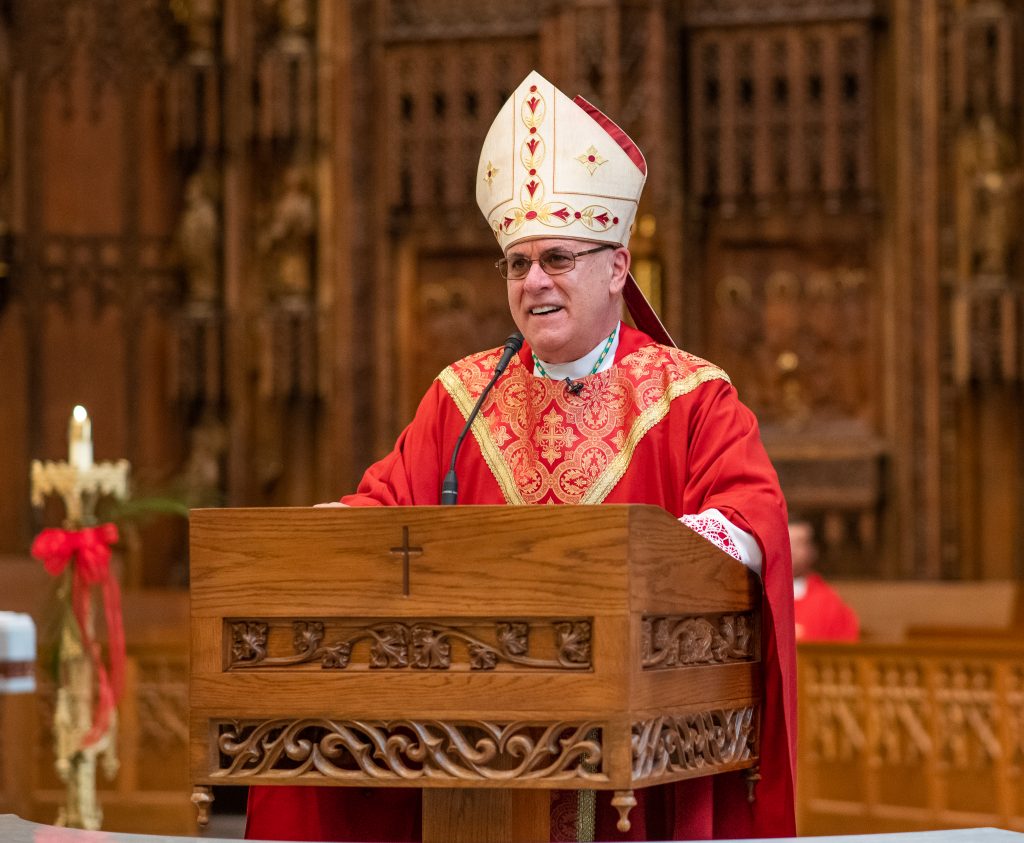 John Martin
In his homily, Bishop Kevin C. Rhoades speaks about the importance of Holy Week and encourages those present to attend Easter Triduum services later in the week.

Through our prayers and liturgies this week, we enter in a contemplative way into the Paschal Mystery of Christ’s passion, death, and resurrection. Today, Palm Sunday, we go with our Lord up to Jerusalem for the Passover festival. On Holy Thursday, we take a seat at His table as we celebrate the Mass of the Lord’s Supper, His Last Supper in which He instituted the Holy Eucharist and the priesthood. Holy Thursday night, we keep watch with Him in the Garden of Gethsemane and we pray with Him. We witness the drama of His betrayal by Judas and the mob who comes to arrest Him. On Good Friday, we remember the mockery of His trial, the cruelty of the soldiers, and the falling away of His closest disciples. We walk alongside our Lord, with Mary our Blessed Mother, as He carries the cross and is crucified. We will venerate the holy cross on which hung the Savior of the world.

On Holy Saturday, the Church waits at the Lord’s tomb in prayer and fasting awaiting His resurrection. Today’s Gospel of the Passion ended with our Lord’s burial in the tomb by Joseph of Arimathea, a righteous man whom St. Luke tells us “was awaiting the kingdom of God.” Even though Joseph was a member of the Sanhedrin, he did not go along with the other members who had demanded that Jesus be crucified. He got permission from Pontius Pilate to take the body of Jesus so he could bury it. Joseph made sure that Jesus was buried with dignity. St. Luke tells us that Joseph of Arimathea wrapped Jesus’ body in a linen cloth and “laid him in a rock-hewn tomb in which no one had yet been buried.” Of course, that is not the end of the story. We will hear about the linen cloth and the tomb in next Sunday’s Gospel. Peter and John will enter that tomb and find the linen cloth, but not the body of Jesus.

Earlier, I quoted part of today’s second reading in which St. Paul writes that God “humbled himself, becoming obedient to the point of death, even death on a cross.” Now I quote what St. Paul wrote immediately after that: “Because of this, God greatly exalted him.” Good Friday leads to Easter Sunday. The way of the cross leads to the resurrection. The lesson for us in Holy Week is to trust in God’s mercy and providence. Whatever crosses we carry in our lives, whatever hardships we face, we need to know that Jesus is walking with us. He is with us in our sufferings. Believing this, “our suffering acquires a new meaning, it becomes a participation in the saving work of Jesus” (CCC 1521) when we unite our sufferings to His. If we carry our cross with Him, He will lead us to the resurrection.

As we begin Holy Week, let us ask for the grace to enter into these mysteries in a deep and personal way. Let us live this week with special reverence and devotion. May we be united to Jesus in His passion like Mary, His sorrowful Mother, filled with love for her Son!  Then, next Sunday we will truly rejoice with her at His resurrection.