It didn’t take long for Zander Horvath to make his mark in the National Football League.

In the Los Angeles Chargers’ season-opener against the Las Vegas Raiders, quarterback Justin Herbert connected with Horvath on a 1-yard scoring toss for the team’s first touchdown of the season. The following week at Kansas City, Horvath once again found the endzone, converting on a play-action pass to the flat from one yard out. Just like that, Horvath had become the first rookie running back or fullback to record touchdown receptions in each of his first two NFL games since 1942.

Not bad for a former college walk-on who was selected 260th overall in the NFL Draft.

“To be honest, no,” said Horvath when asked if he expected this type of immediate success at the professional level. “Especially coming in as a fullback — they don’t get the ball much, depending on which team you’re playing with. But to have that happen the first game, being the first touchdown of the year, and then the following game to have another one, it kind of really sparked something in me and just gave me confidence that throughout the season, no matter what position I’m playing, there’s opportunities there, and you’ve just got to take advantage of them.”

That’s exactly what the former Marian High School standout has done thus far in his young career. Since becoming the program’s first football player to be selected in the NFL Draft in April, Horvath has found his home in L.A. — not only making the team’s final roster, but also being tabbed as the Chargers’ starting fullback. It’s safe to say that Horvath’s football journey has already been an unforgettable ride. 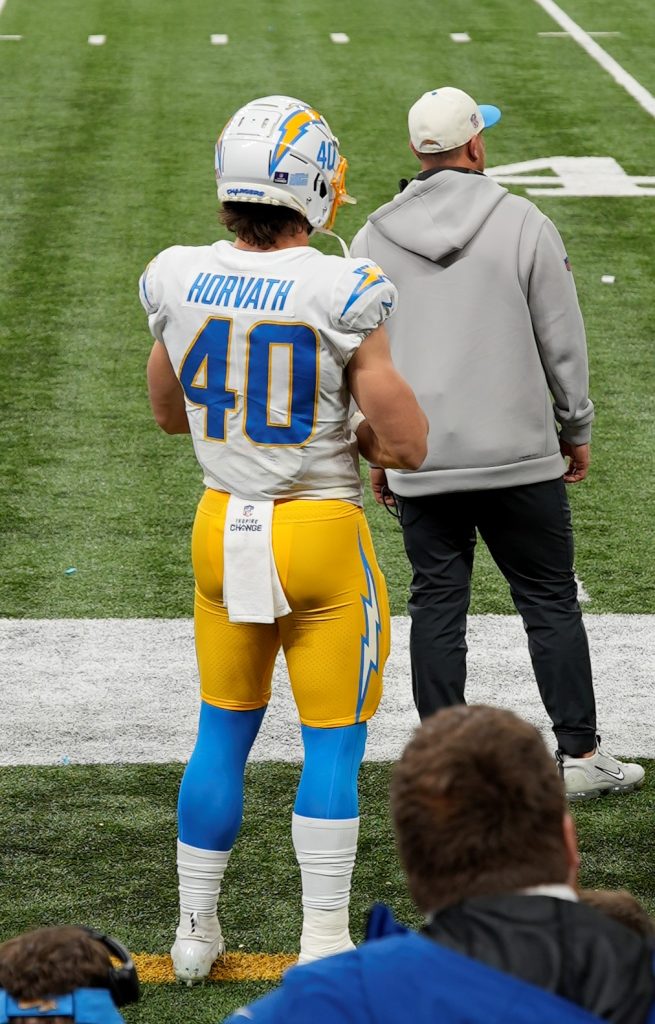 L.A. Chargers fullback Zander Horvath readies himself for on-field action during the Chargers’ 20-3 win over the Indianapolis Colts on Dec. 26.

“It’s been so fun,” said Horvath’s fiancé, Natalie Winters. “I feel so proud of him. He’s been living his lifetime dream out. I can feel nothing but proud of him.”

“Growing up, before I started playing football in 5th grade, I was always wanting to be in the NFL,” agreed Horvath. “That was always my dream, so I think it definitely met my expectations. It’s a lot more stressful than I want it to be, but it’s a job. You’ve got to take care of business when you’re out on the field. I enjoy getting to compete at the highest level; there’s not many people who get to say that. Just continue to stay healthy, be productive, and get the job done.”

Since his electric start to the season, Horvath has seen a more limited role on the Chargers offense. He’s played a handful of offensive snaps each game, primarily as a blocker for starting running back Austin Ekeler. However, Horvath has occasionally been called upon to carry the ball or run a pattern out of the backfield from his fullback position. Through his first 15 NFL games, Horvath has four rushes for eight yards and five catches for another eight yards, along with his two touchdown receptions. Horvath said playing fullback is where he has recognized the most growth in his game. 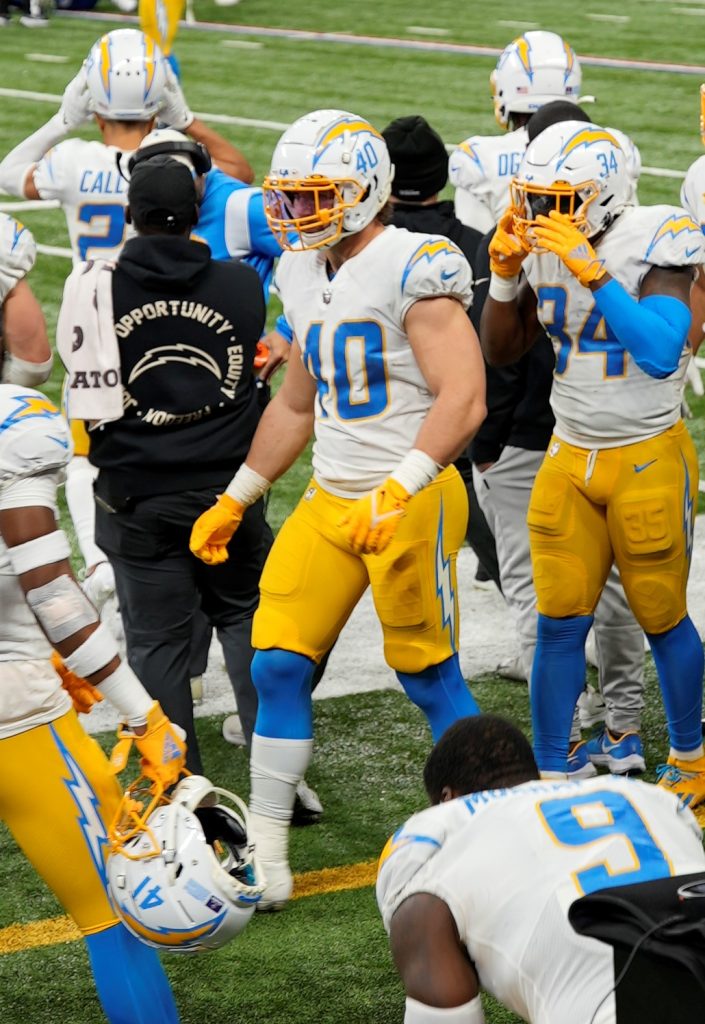 “I would definitely say the fullback position, because that’s something I didn’t play as much in college,” said Horvath. “I played a little bit my sophomore year coming in, but that being my main job and having to focus more on that, I think really pushed me to hone in on all the details there and better my craft in that area, just because it was something that was new to me. But I think I’ve been doing well this year, and then on special teams too, I’ve been on the Core Four [special teams players], so just trying to get those opportunities as well.”

Indeed, Horvath has seen a majority of his on-field action this season on special teams as a part of kickoffs, punts, and kick return units. He even recorded his first NFL tackle on special teams versus the Jacksonville Jaguars in his third game of the season. Horvath has logged at least 15 special teams snaps in every game except the Chargers’ visit to Indianapolis on Dec. 26, when he suffered a sprained ankle that caused him to miss the following game against the Los Angeles Rams. However, the Chargers’ 20-3 win over the Colts was enough to propel them into the postseason — L.A.’s first playoff berth in four years.

“It’s a great thing as a rookie to make the playoffs,” said Horvath. “I was talking to people the other day about it, too. It’s been I don’t know how many years, but a lot of guys have been here their whole career and haven’t been to the playoffs, so to be able to do that for them too is another big part.”

For Horvath’s friends and family, the Chargers’ recent visit to the Hoosier state provided them with a rare chance to see him play in person and cheer on their favorite fullback. 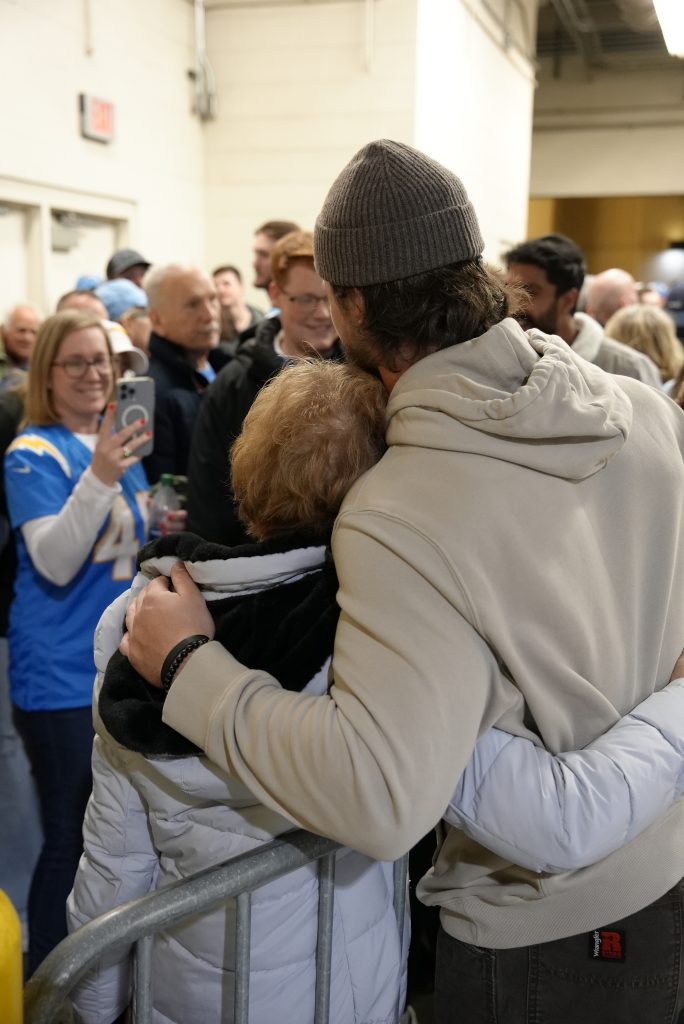 “It’s really exciting to see him do so well,” said his sister, Marianna Horvath, who admitted that football isn’t usually their first topic of conversation. “In high school, he really pushed himself. And then when he got to Purdue, he continued to push himself. He put a lot of effort into it, so it’s been super cool seeing how far he’s come.”

“It’s been great,” Horvath said of returning to Indiana and playing in front of loved ones. “All the games we’ve been playing are in California, so we don’t get much family out there, family or friends — it’s a long way for them. So, coming back home was great to have everybody out. Some people here I haven’t talked to in a couple years, so it’s good to know that I have support whenever I’m back home from people I may not have talked to in a long time.”

Come July 1, these same friends and family will be supporting Horvath in a different setting, as he and Winters will be getting married. Despite the challenges of long distances and busy schedules, the couple is preparing for a future together and striving to put God first.

“We had to do all of our Pre-Cana [marriage preparation] out in California, so that’s been a little difficult,” said Winters. “But we’ve been blessed with great parents who have helped us plan our wedding, so we’re nothing but thankful for them.”

“It’s something you can rely on no matter what’s going on,” Horvath said of his faith. “Whether it’s good or bad, you know you can fall back on that to help you.”