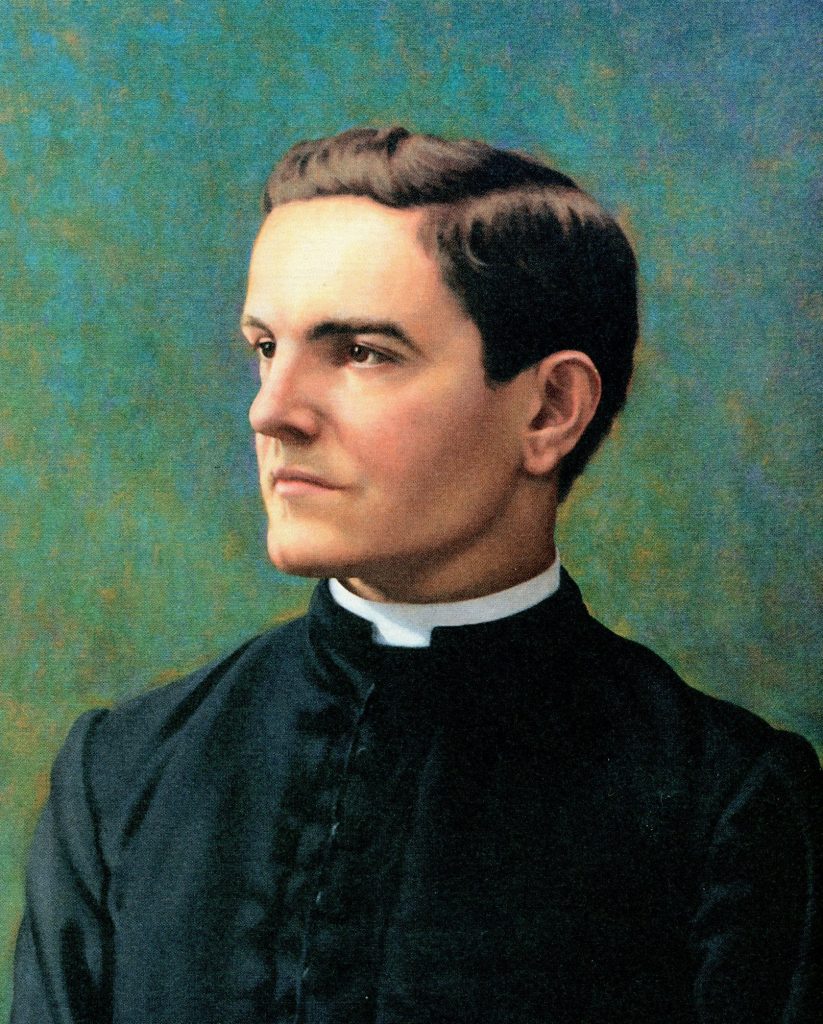 Father Michael McGivney carried the longing for priesthood in his heart as a young man, but temporarily abdicated that plan after learning of his father’s untimely death in 1873. As the oldest son, he felt the weight of responsibility to care for his mother and remaining siblings and returned to Connecticut from seminary in Montreal, Canada.

At the time, non-Catholics were suspicious of Catholic families, so when the head of a household passed away, remaining family members were often left without life or health insurance or any sort of financial security. Because of this, Father McGivney, who completed seminary formation close to home and became a priest, advocated for proper financial care for Catholics. Eventually, his inspiration became reality in what we now know is the Knights of Columbus organization.

What began in Father McGivney’s small parish basement has grown into over 15,000 councils in 13 countries. Father McGivney will be beatified on Oct. 31, 2020, in the Hartford, Connecticut, diocese.

Father Kopil is finishing his first year as state chaplain and explained that a conversation with Brian Caulfield, the vice postulator for Father McGivney’s cause for canonization, dramatically increased his devotion to the soon-to-be-beatified priest. What struck Father Kopil most was that Father McGivney seemed to be detached from what most people consider is important in this life: fame, money, prestige. Instead, life was all about service for Father McGivney, including the people of his parish and the men of the Knights of Columbus. “As a parish priest myself, I was inspired by his virtue, because this is how we are all supposed to live: dedicating ourselves completely to our parish. We shouldn’t count the cost but serve as much as we can for the good of the people,” Father Kopil shared.

Father McGivney died at the young age of 38 on the eve of the feast of the Assumption. The cause for his canonization reached its newest milestone after a miracle was reported in 2015.

A family discovered, through prenatal testing, that their child would have Down syndrome. The child was also found to have a major congenital organ disorder, which would have caused him to die in vitro or immediately after birth. They chose not to abort the baby and asked for Father McGivney’s intercession for a miraculous cure. When the mother attended her next prenatal appointment, her physician discovered there was no indication that the child had any trace of the certainly fatal disorder.

Father Kopil said Father McGivney is only the third priest in the United States who will [hopefully] be canonized. “I have now added Father McGivney to my list of saints I pray to daily,” he said.

When Father Kopil was asked to be Knights of Columbus state chaplain a few years ago, he learned of Father McGivney’s role as the spiritual guide for the organization. He wasn’t just an administrator doing paperwork or running meetings. He was the spiritual leader who reminded the other men about Christ’s call for us to love — wanting and working for the good of others. “I’ve always tried to channel that idea of Father McGivney. My job isn’t to run the Knights of Columbus in Indiana,” Father Kopil explained. “My job is to remind the men that we work for Christ. It’s all about Christ’s mission. It’s what Jesus asked Father McGivney to do and what Jesus asks us to do. I want to be like Father McGivney to help motivate other men to do what he did and be the same kind of spiritual guide to the men of Knights of Columbus that he was.”

Because seating at the beatification will be limited due to COVID-19 precautions, Father Kopil is organizing watch parties throughout the state of Indiana, so they can be part of the beatification together as brother Knights.

For more information on Knights of Columbus, visit kofc.org. The Father Michael McGivney Guild, fathermcgivney.org, was founded a couple of years ago as a resource to find out about him and ask for his intercession.