At 1 p.m. on Sunday, May 6, at Our Lady of Lourdes Grotto behind the Basilica of the Sacred Heart on the campus of the University of Notre Dame, a Marian procession will begin, with the faithful of all ages carrying flowers and singing. The procession and ensuing crowning with flowers will honor Mary at the university dedicated and named for her.

May crownings are a traditional Catholic devotion that honors Mary in her premier title, that of the mother of Jesus. They began long ago in the Church and took place at Notre Dame until the 1950s. This year’s Notre Dame May crowning, sponsored by the McGrath Institute for Church Life, is in its third year since the tradition was revived on campus. 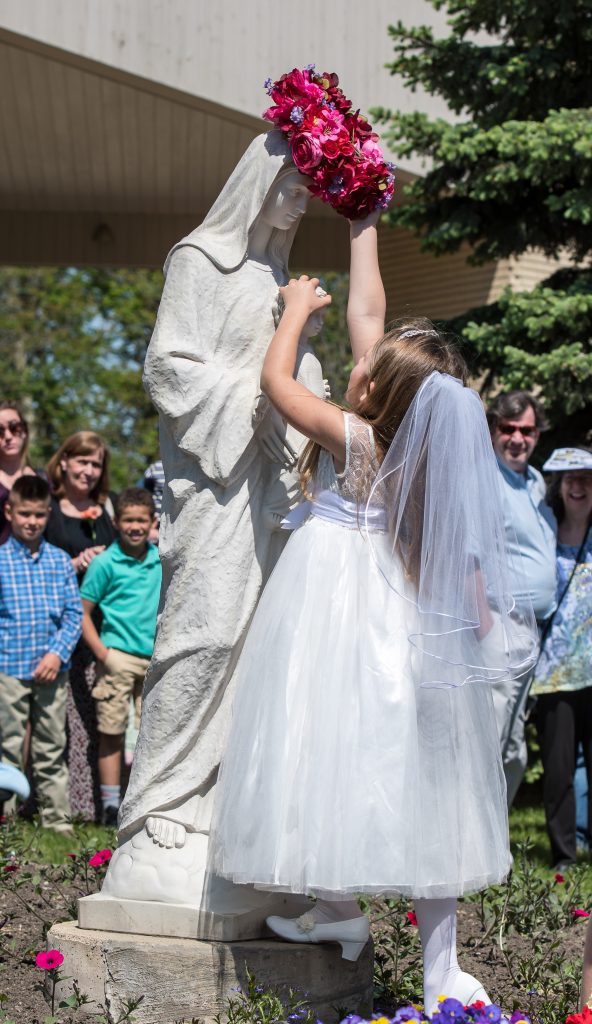 Second-grader Lucy Hall places a crown on Mary’s head outside Our Lady of Good Hope Church, Fort Wayne, in 2017. Many parish religious education programs and schools across the diocese hold May crowning events. Joe Romie

Father Edward Sorin, CSC, founder of the university, trusted deeply in Mary. His Marian devotion was outstanding in a time when Catholics were scorned and ridiculed in American culture. He began not only a college in her name, but also a newsletter and publishing house, Ave Maria Press, which exists to this day.

Many of Father Sorin’s letters and correspondence are filled with dedications and prayers to Mary, mother of God. Father Sorin knew well her love and faithfulness, and it sustained him greatly in the difficult early years of the university’s development.

Sunday’s Marian procession will pass by the Main Building before arriving at Geddes Hall, where a statue of Mary, Mother of Mercy, will be crowned. Scripture will be read along the way, songs sung and prayers said, including the Litany of Loreto. The procession itself is an image of the pilgrimage of the faithful journeying together enroute to heaven, said John Cavadini, director of the McGrath Institute and theology professor at the university.

The Mary statue, holding the Child Jesus, in isolation, after the crowning ceremony. Joe Romie

Notre Dame’s May crowning is in union with many others occurring throughout the local Church in the Diocese of Fort Wayne-South Bend, in its Catholic schools and parishes, as well as around the world.

The Catechism of the Catholic Church testifies to the foundation of the tradition, which lies securely in the reverence due to the mother of God. As the whole trajectory of the Church is Marian in nature, “Mary goes before us all in the holiness that is the Church’s mystery as “the bride without spot or wrinkle,” it says. “This is why the ‘Marian’ dimension of the Church precedes the ‘Petrine’” (CCC 773).

“Mary, in the order of grace, is our advocate, a mediatrix, that is a mediator of grace. She is more present to us in heaven, crowned queen, as she is one with God now. She participates in a way that we can invoke Christ … available to us all, and everywhere,” Cavadini explained.

Adorning her with a crown of flowers is custom of great beauty, he reflected, and recovers that beauty “not as nostalgia, but in our lives, in our own time. This beauty is accessible to all. The observance of May crowning reflects the beauty of the mystery that it evokes. Honoring Mary, crowned Que  Heaven and Earth, is the fifth mystery of the rosary. We are presenting it physically.”

Cavadini emphasized a “neglected and forgotten beauty” in crowning the “image of Mary, who made room for God in this world, by her ‘Yes!’ She offered her own loving participation in God’s plan. She made a space for him, literally. The procession is a sort of dedicating ourselves to doing that too … creating space for Jesus wherever He might be found.”

He noted that Mary made room for Jesus, both physically and spiritually, in her womb and in her life. We can be like Mary and open our lives, welcome Jesus in, and make room for God to dwell within us.

“We dedicate ourselves to her and imitate her example. She did it to the utmost,” he added. “We recall the heart in which she said yes, the burning charity to be configured to God’s plan of love. We invoke her, increase our devotion to her and this is also a consolation, that she makes room for us in God’s plan, in the order of salvation. Our role is one of filial devotion.”

Remembering Mary during the month of May has been popular in devotional culture since the Medieval Ages, when the liturgical time between Easter and Pentecost was especially sacred. In the Northern Hemisphere, it coincided with the blooming and blossoming of fertile plants, trees and flowers. By the 13th century, in the Western Church, there were many local European festivals and remembrances to Mary.

The Jesuit order of the 17th and 18th centuries remembered Mary during the month of May especially in their main church in Rome, the Gesu. Papal support in the 19th century, with indulgences and prayers, solidified the tradition.

Mary’s first apparition at Fatima occurred May 13, 1917. Pope Pius XII, in the 1947 encyclical “Mediator Dei” continued to encourage special prayers to Mary during the month.

The tradition of May Crowning also has a scriptural basis. Notre Dame professor Ann Astell described the biblical roots of Elizabeth’s greeting to Mary at the Visitation, which echos the Old Testament use of language used upon greeting a queen mother.

Icons of Mary were often crowned in the Eastern Church, beginning as early as the first century. Later, in the Western Church, Pope Clement VIII began the practice of crowning the image of Mary in the Basilica of St. Mary Major in Rome.

“The May crowning is a reverent devotion to the mother of God, whose mercy and grace Pope Francis has so frequently recommended to the faithful as a source of challenge, inspiration and consolation,” said Cavadini. “Crowning Mary as queen of heaven and earth affirms the dedication of Our Lady’s university to its Marian charism of making room for Christ, wherever He may be found.”

Anyone wishing to attend the Notre Dame May crowning may bring their own flowers from a garden. Carnations will be available for all. One of Cavadini’s fond memories from last year’s procession was of a young boy who picked dandelions along the procession and reverently placed them before Mary after the crowning.

For more information and to watch a historical video from the 1950s of a Marian procession at the University of Notre Dame, visit www.maycrowning.nd.edu.