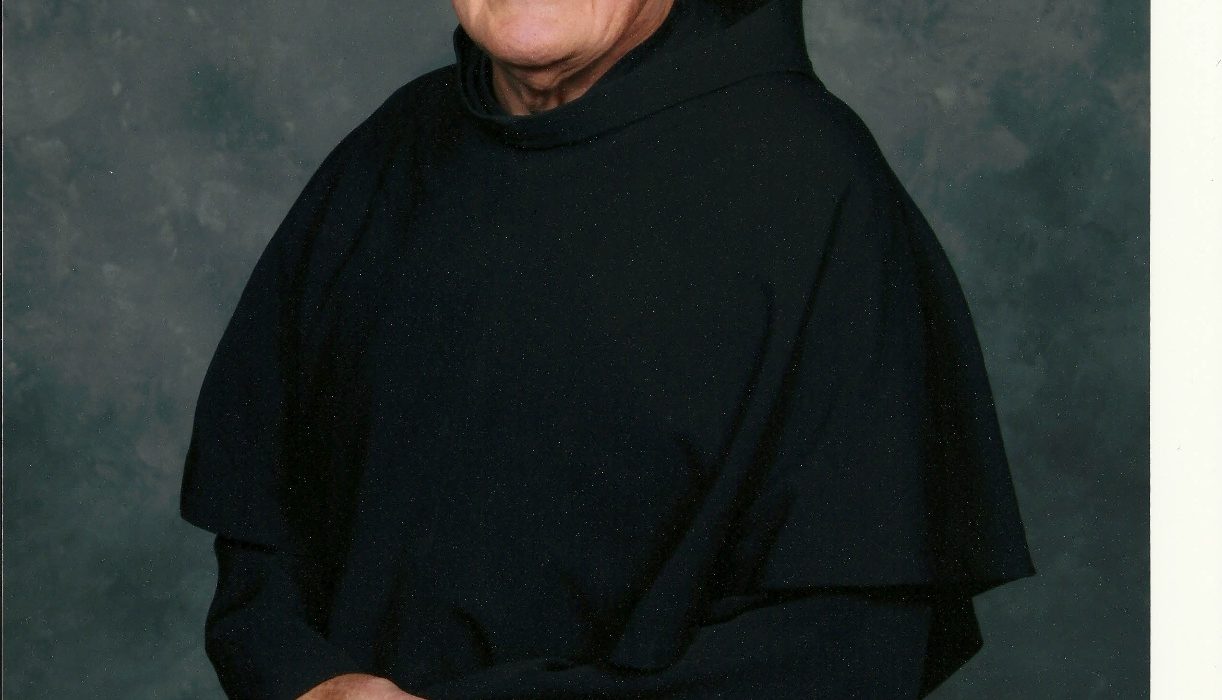 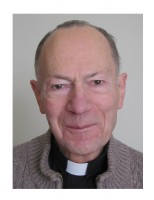 SOUTH BEND — Fifty years after Donald Guertin abandoned his engineering studies for the priesthood, he’s still serving the Lord with his many talents.

Holy Cross Father Guertin was born in Detroit, Mich., on Oct. 27, 1928, to a family that also included two more boys, and a girl. He graduated from St. Francis Xavier High School in Ecorse, Mich., in 1946, and studied at Chaffey College in Alta Loma, Calif., before joining the U.S. Navy and submitting to four years of flight training.

After being discharged from the Navy, Father Guertin enrolled at the University of Notre Dame with the intention of studying engineering. Now, he said, he sees that God had other plans for him.

“I took one of those lectures we were required to attend, and, well, I took a step back and took a wider view of things,” he said of his first year.

He altered his original plans, enrolled in Old College and set out on the road to become the only priest in his family. Father Guertin made his first vows after attending Sacred Heart novitiate in Minnesota, then returned to Notre Dame and graduated in 1957. Four more years at Holy Cross College in Washington, D.C., followed, and he was ordained a priest at the Sacred Heart Basilica on June 7, 1961.

Twice the Lord put Father Guertin in the role of pastor at Little Flower Parish, South Bend — once from 1962-66 and again from 1997-2001. He also served as an assistant at Christ the King Parish, and as one of several pastors of St. Joseph’s Parish in Mishawaka from 1968-1974.

At. St. Joseph’s, he enjoyed being a part of important transitions that were happening.

“The parish priests and members of the parish introduced the changes coming from the Second Vatican Council, such as the liturgical changes and shared parish leadership, by initiating a parish council, parish board of education and social justice efforts,” he remembered.

“It was a plan proposed by parishioner Robert Skudlarek that involved religious education for all ages and for the parish elementary school to serve the integration of the neighborhood by opening the parish school to neighborhood children who were unable to afford the full tuition.”

But Father Guertin began to feel a call to help in a more specific way. In 1974 he began to study counseling psychology and received a master’s degree, which led to his appointment to the Family and Children’s Center in 1976.

“I wanted to develop some additional abilities to serve, and I thought psychology would be helpful,” Father Guertin explained.

For the last five years, Father Guertin, 82, has worked part time with the Spiritual Care Department at St. Joseph Regional Medical Center as a priest visitor to the sick. He is also on a rotation with two other priests, Father Tom McNally and Father David Link, to celebrate a weekend Mass at the prison in Michigan City.

Now a resident of Our Lady of Fatima House in South Bend, he enjoys his semi-retirement by running around St. Mary’s Lake — weather permitting. He also plays tennis, a sport he enjoys so much that he wishes he’d never taken time off, he said.

He added that he is grateful for his blessings, which have come at every assignment and in every location.

Ordained into the priesthood of the Order of Friars Minor Conventual by Archbishop Leo Denz in St. Paul Cathedral in Minnesota on Feb. 19, 1961, Father Schneider will joyfully celebrate his 50th jubilee this summer.

Born in March of 1934, this Lansing, Mich., native was the third of 12 children born to Anthony and Helen Schneider. Educated in the Catholic faith, Father Schneider says, “I really loved the Mass. I used to have Mass as a kid and invite all my brothers and sisters to attend.” His desire to celebrate Mass and the influence the parish priests, who were Conventual Franciscans, led him to consider the priesthood.

So at the tender age of 14, the young Schneider moved to southern Indiana to attend Conventual Franciscan High School, then entered the novitiate in Angola for a year. During his discernment he found that the Franciscan “way of living” appealed to him. “It felt comfortable — a good way to follow Christ. It’s a vocation. Living the Franciscan life comes with time to fully understand it,” he says. He was grateful for the support of his family and quips, “They told me later that they said a prayer every day so that I would stay.”

Following his novitiate year, Father Schneider studied philosophy at the seminary in Carey, Ohio, continuing his education in Minnesota at Assumption Seminary where he earned his undergraduate degree. He subsequently earned a master’s degree in science from the University of Notre Dame.

Following his ordination into the priesthood, Father Schneider, who humbly admits his expertise with numbers, was first assigned to teach math at the University of Louisville. Following a two-year term there he was reassigned to his first parish, St. Benedict, in Terre Haute. Three years later he found himself in an Italian parish in Chicago Heights and for the next decade he devoted himself to the three generations of Italians at San Rocco Parish, even learning the language to enhance his ministry there.

In 1991, Father Schneider was assigned as administrator of St. Paul Chapel on Clear Lake near Angola where for the past 20 years he has celebrated Mass for and ministered year round to the “lake people.” During many of those years he was parochial vicar of St. Anthony of Padua in Angola as well. He lives in community with three other Franciscan priests in the St. Anthony friary located on the church’s property.

Though Father Schneider recalls the difficulty he had transitioning from teaching to parish ministry, he says he enjoys dealing with the people. “The deep faith of some of the people have moved me and spurred me on to serve even in the difficulties,” he says. And the best thing about being a parish priest is “being able to celebrate Mass and administer the sacraments.”

During his free time Father Schneider likes to work with wood. “I made a wooden tabernacle for the chapel of oak,” he says, adding that many of the places he has served have a masterpiece to mark his time there. He also enjoys riding his bicycle along the bike paths in northern Indiana.

Father Schneider and his church community at St. Paul Chapel on Clear Lake plan to celebrate his 50 years as shepherd to the flock on Father’s Day, June 19, with a special Mass followed by entertainment and a communal meal. He is grateful for his ministry and the people he serves saying, “Seems impossible that I made it! I’m grateful to God for giving me this much time.” 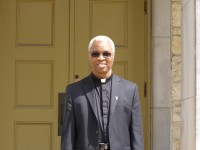 SOUTH BEND — “I’ve already accomplished what God has expected of me. What I do now is persevere and keep working,” said Congregation of the Holy Spirit Father Lawrence Teteh, Ph.D, pastor of Our Lady of Hungary Parish in South Bend about what comes next in his journey through the priesthood. Father Teteh is celebrating 40 years of being in the priesthood this year.

Father Teteh was born in 1944 in Ahiara Imo State Nigeria. Being the fifth of 11 children (six boys and five girls), he comes from a very strong Catholic family. His father was a station school teacher and catechist in Catholic missions for 48 years before he retired. The tradition of the family was a nightly family rosary and Sunday Masses were never missed.

He spent the next 13 years in the junior and senior seminary formation program which included secondary school studies, novitiate, philosophy and theology studies and being ordained as a missionary priest in the Holy Ghost Congregation (Spiritans) on Aug. 22, 1971.

“My first two years as a priest were spent in solely pastoral ministry in three different parishes. But from 1973 until I came over to the Diocese of Fort Wayne-South Bend in 2001, I have been in and out of educational institutions either as rector, vice principal, graduate student, lecturer and chaplain (of campus ministry),” noted Father Teteh, who holds academic degrees in philosophy, theology and education, which were earned in several places including Nigeria, Belgium and the United States.

Father Teteh came to Our Lady of Hungary in 2001 first as an associate pastor and then as administrator there following the death of the pastor Father Ted Kwak in January 2004. He was appointed the pastor at Our Lady in July of 2004.

“Thus by nature and nurture hailing from a family of mostly teachers, I have been a professional teacher most of my life,” notes Father Teteh. He finds the priesthood a joyful profession, humbling and challenging and something that has brought him to different cultures and countries and groups of people: Whether in the school classroom or pastoral setting. His joy is the recognition of being used by God and the Church in the furtherance of the Good News.

Father Teteh loves reading, soccer and tennis, and listening to classical music. He enjoys his work and plans to continue serving the Lord for as long as he is needed.