NAGASAKI, Japan (CNS) — While the world knows Nagasaki as the site of a U.S. atomic bomb blast, for the Catholic Church it is also the site of one of the fiercest campaigns of anti-Christian persecution.

Visiting the city Nov. 24, Pope Francis paused for prayer on the hill where St. Paul Miki and 25 others were crucified in 1597; hundreds more were killed in the decades that followed. For more than 200 years there was not a single Catholic priest in Japan, but small communities of “hidden Christians” kept Catholicism alive by secretly baptizing their children and teaching them the faith.

When priests finally were allowed to return to Japan, not all the “hidden Christians” joined the parishes they established, preferring to preserve the family-focused faith they had learned from their ancestors. Small groups of them still exist today.

On a cold, rainy morning at the martyrs’ memorial, Pope Francis said the place is not so much a reminder of death as of the promise of eternal life in Jesus. 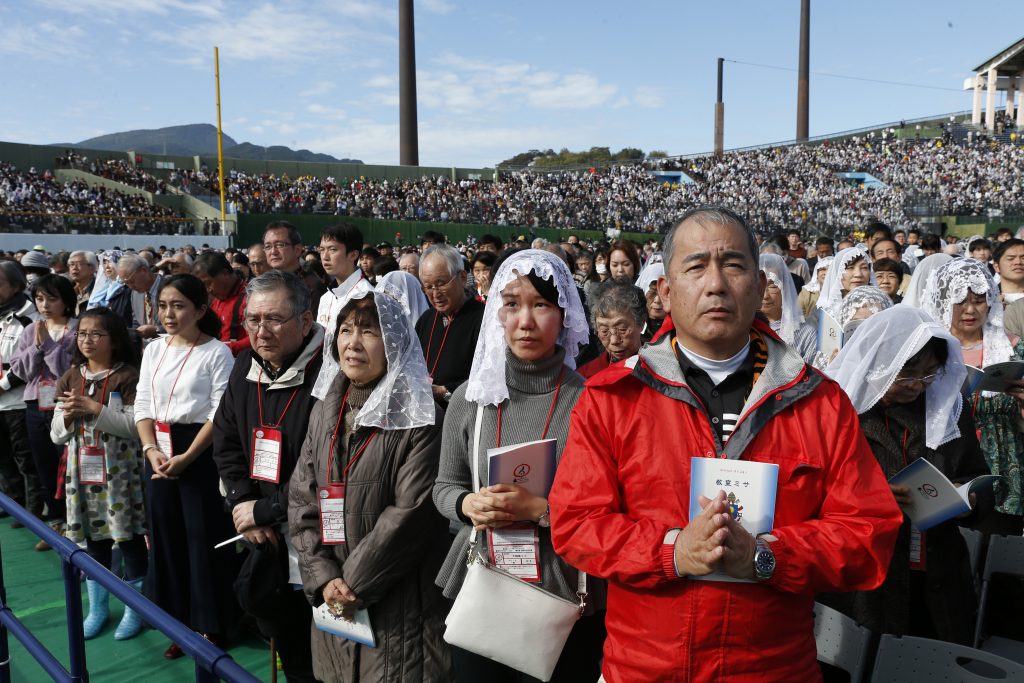 The martyrs’ witness, he said, “confirms us in faith and helps us to renew our dedication and commitment to that missionary discipleship which strives to create a culture capable of protecting and defending all life through the daily ‘martyrdom’ of silent service toward all, especially those in greatest need.”

Pope Francis, who as a young Jesuit in Argentina longed to serve as a missionary in Japan, told the small crowd at the memorial that he “found powerful inspiration in the story of the early missionaries and the Japanese martyrs.”

Standing before a monument featuring bas relief sculptures of the 26 martyrs on the horizontal beam of a cross, the pope urged prayers for all those who endure persecution because of their faith today.

“Let us speak out and insist that religious freedom be guaranteed for everyone in every part of our world,” he said, and “let us also condemn the manipulation of religions” by those seeking power or hoping to sow violence and chaos.

After a brief rest in the Nagasaki archbishop’s residence, Pope Francis celebrated Mass in the city’s baseball stadium with about 35,000 people, including members of the U.S. military stationed in Japan and Catholics from China and Korea.

In his homily, the pope made reference both to the unwavering faith of the Japanese martyrs and the horrendous suffering of the people after the United States dropped an atomic bomb on Nagasaki in 1945.

“This land has experienced, as few countries have, the destructive power of which we humans are capable,” the pope said in his homily. “Nagasaki bears in its soul a wound difficult to heal, a scar born of the incomprehensible suffering endured by so many innocent victims of wars past and those of the present, when a third World War is being waged piecemeal.”

Pope Francis asked the region’s Catholics to pray for those in other parts of the world who are suffering the effects of war today and to bear witness to Jesus’ kingdom, which is one of “truth and justice, of holiness and grace, of love and peace.”

The charred, eyeless head of a Marian statue that survived the destruction of Nagasaki’s cathedral in 1945 stood near the altar. The pope venerated it with incense as the Mass began.