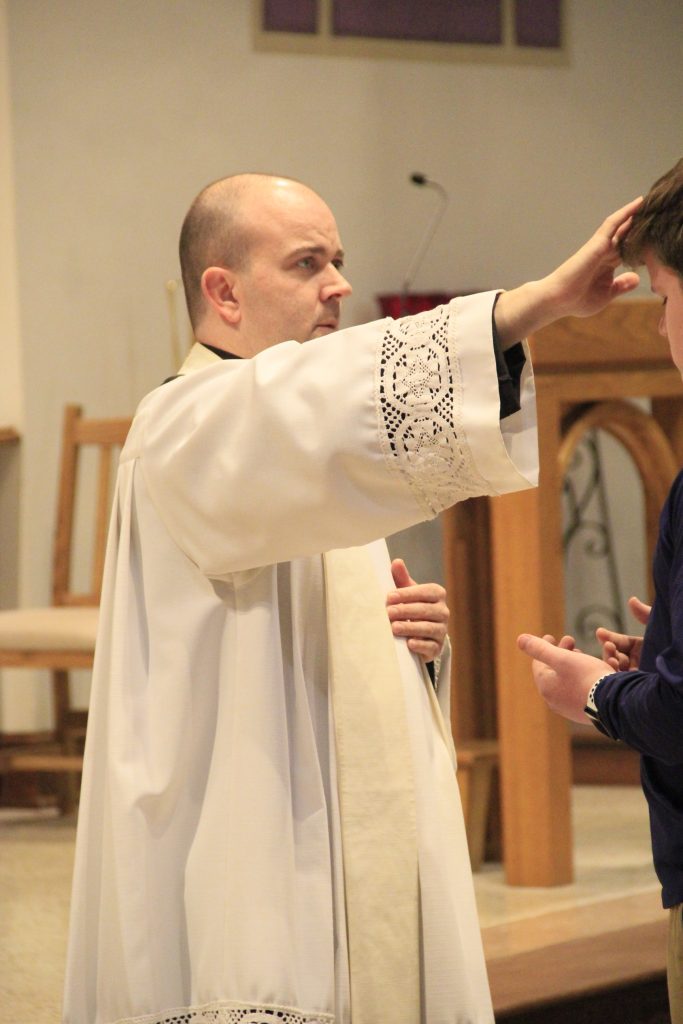 Photos by Jennifer Barton
Father Andrew Curry prays over a worshipper during a healing service earlier this year. The power of the Holy Spirit is invoked mainly through intercessory prayer at healing services.

Father Andrew Curry, parish administrator of Most Precious Blood in Fort Wayne, had long been open to the charismatic renewal within the Church that gave birth to healing services. During his time at Franciscan University in Steubenville, Ohio, Father Curry became involved in the Catholic charismatic renewal.

The history behind the charismatic renewal dates to the early 20th century, when Blessed Elena Guerra of Italy wrote to Pope Leo XII asking that he consecrate the 1900s to the Holy Spirit — which he did. During that century, a “bursting forth of the Holy Spirit” began across that nation, inspiring a new movement within the Church. Appropriately, Duquesne University of the Holy Spirit in Pittsburg, Pennsylvania, became the epicenter of the Catholic charismatic renewal in the U.S. during the late 1960s. In 1975, St. Pope Paul VI officially welcomed charismatics into the Church. 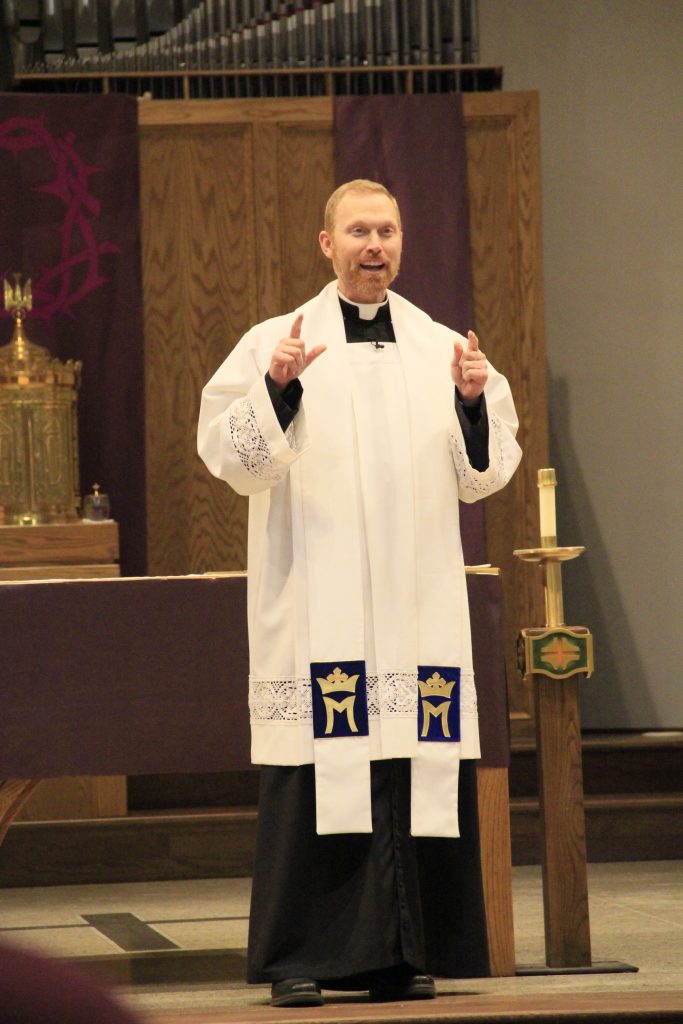 Priests from outside the Diocese of Fort Wayne-South Bend have occasionally been brought in to conduct healing services. But within the last two years, several diocesan priests, including Father Benjamin Muhlenkamp, Father Mark Gurtner and Father Terrence Coonan Jr. have begun hosting their own healing services, praying over attendees. 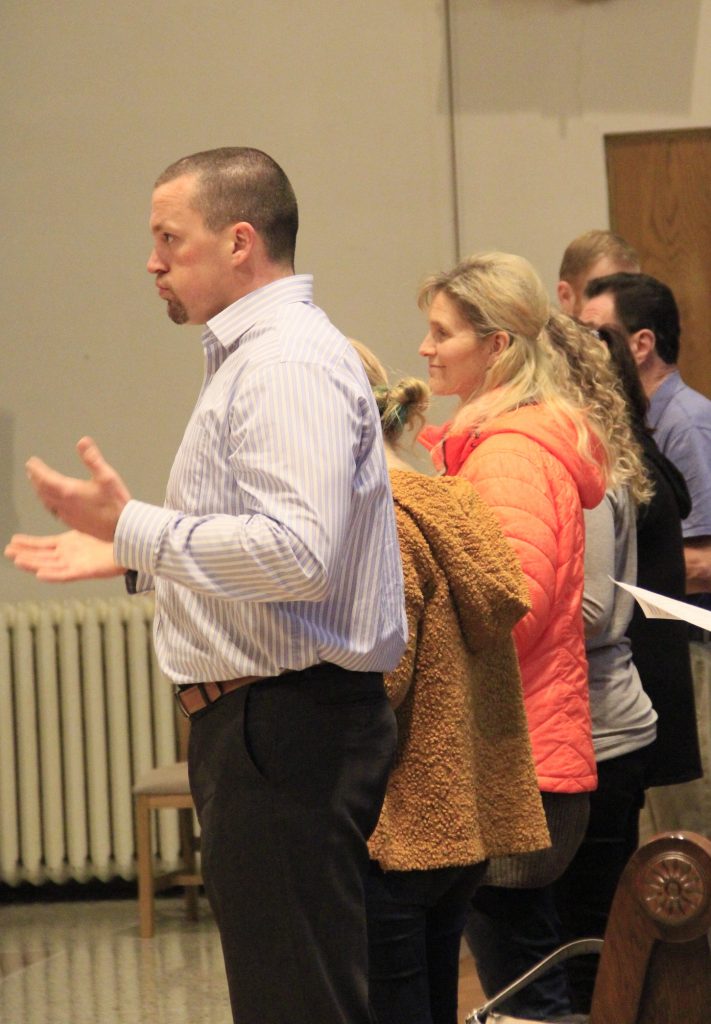 The healing can take many forms. Justin Aquila, director of Campus Ministry at the University of Saint Francis, has been involved in healing services both on campus and at Most Precious Blood. He stated that many of the young people who attend seek healing for mental health issues. “One of our students said healing nights are the best thing that’s happened for mental health on campus,” Aquila said.

Father Curry was amazed to discover that “anybody can do this.” Parents, he said, have particular power to pray over their children’s physical, mental and spiritual health. “We think no one can pray for healing for others,” he stated, but pointed out that in his studies he came to realize that healings were part of the early Church and necessary for evangelization. 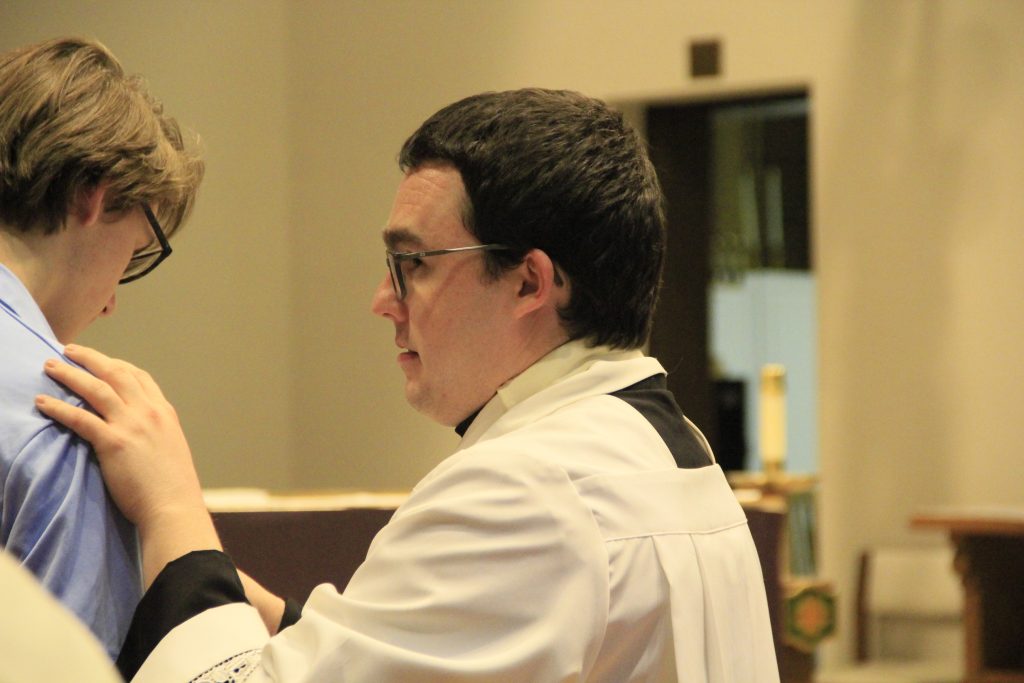 Father David Huneck prays with a worshipper during a healing service earlier this year. The power of the Holy Spirit is invoked mainly through intercessory prayer at healing services.

All people have the God-given gift of intercessory prayer. Aquila discerned this as one of his charisms and spends hours praying in person over others. He takes these occasions personally, going to confession and ensuring that he is in a state of grace so that he can withstand any potential spiritual attacks. At the end of the evening, he goes home tired but joyful. “I think praise is usually the thing that comes out of me afterwards. When you’re praying over someone, you don’t know what they’re receiving … you don’t know the fruits. You kind of have to praise the Lord for whatever you think happened.”

Prayer warriors work in teams to support the priests at healing services. Tony Moore, a parishioner at Most Precious Blood, recently found himself called — literally — to serve on a healing service team that Father Curry put together. Moore had never been to a healing night and was unsure what to expect. He even confessed to a bit of skepticism, but he prayed and delved into both Scripture and the writings of Mary Healy, professor of sacred Scripture at Sacred Heart Major Seminary in Detroit.

“To me, the experience was awesome and joyful,” he recounted after his first healing night. “You don’t do anything; it’s all Christ. It’s all Him working through us, the Holy Spirit working through us … Three and a half hours passed in a blink.” 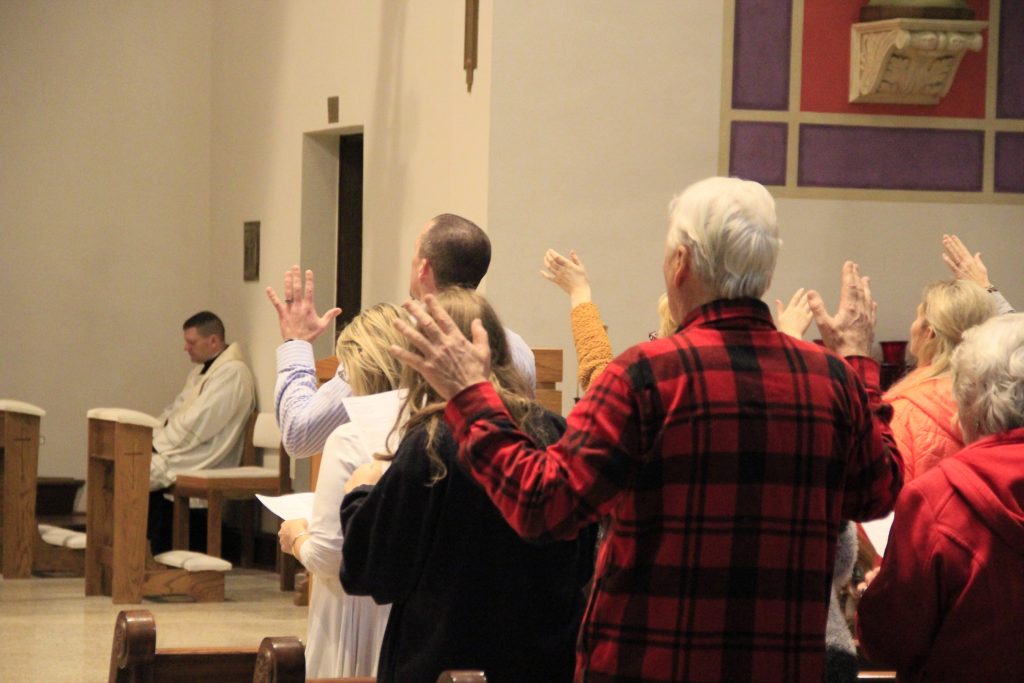 Worshippers pray during a healing service at Most Precious Blood Parish, Fort Wayne, in early March.

Moore’s role is simply to add his prayers to the priests’, and he stresses that the priest is the one doing the praying, but Christ is the One who heals.

“I’m a believer. There is no doubt in my mind between Scripture, what Christ Himself said, and what I’ve seen so far — that all He wants to do is heal people and He uses us to do it. It’s a God thing that I don’t understand.”

Most people have questions regarding healing services. Foremost is whether everyone will receive a miracle. Father Curry encourages everyone to “go with the expectant faith that Jesus does heal,” but he cautions that human beings cannot put demands on God and that healing may not come in the form one expects. “Not all healings take place the same way. Healing is a process.” Sometimes healing can come instantly, sometimes it is gradual. Sometimes it doesn’t come at all. “But give it to God.”

Aquila added that: “Physical healing takes faith. There’s a certain boldness in asking the Lord for something … The more humble I am, the more bold I become because I have to trust Him for everything.”

Another question frequently asked is whether everyone who is prayed over faints, as is often seen in Protestant healing services. Aquila explains that no, not everyone will “rest in the Spirit,” as it is referred to.

He does point out that there are people specifically engaged to catch anyone who does fall. However, he believes God does not work outside of the desires of His children. There seems to be an openness within some people that may induce them to resting in the Spirit, he said.

All of those involved in healing services have an understanding that this was a way that the Apostles themselves spread the Gospel message throughout the world. Moore noted that “they went out and healed, and that’s what brought people to Christ — that authentic healing ministry.”

For the healing to continue, Father Curry believes parishes should offer regular healing nights. Equally important is to praise God for His gifts, particularly any healing that might have occurred.

Father Curry intends to hold healing nights on a regular basis, as well as praise nights to continue evangelization and spiritual growth within his parish. A healing service or healing night takes place outside the context of the Mass and should not be confused with the eucharistic liturgy.

Father Coonan, pastor of St. Therese, Little Flower Parish in South Bend, has also conducted healing services in the past and is considering offering more in the future, though no dates have been set.

Whether or not one receives healing, a night of prayer can be life-changing. “To see how people respond to how Christ was working in a real way was just a powerful thing,” Moore stated. Father Curry said the night is truly about “encountering Jesus; letting Jesus encounter me.”