JERUSALEM (CNS) — The controversial Israeli Nation State law must be repealed because non-Jews also are citizens of Israel, said the Catholic ordinaries of the Holy Land.

“We, as the religious leaders of the Catholic Churches, call on the authorities to rescind this basic law and assure one and all that the state of Israel seeks to promote and protect the welfare and the safety of all its citizens,” they said in a statement in early November. The ordinaries include bishops, patriarchs and religious leaders of various rites who serve in the Holy Land.

All residents of Israel, regardless of their religion, must be treated as equal citizens, the Catholic leaders said.

The law, which was passed in July, establishes that “the right to exercise national determination in Israel is unique to the Jewish people,” that Jewish settlement is a “national value,” mandating the state to “encourage and promote its establishment and development.” The law also establishes Hebrew as Israel’s only official language, downgrading Arabic to a “special status.” 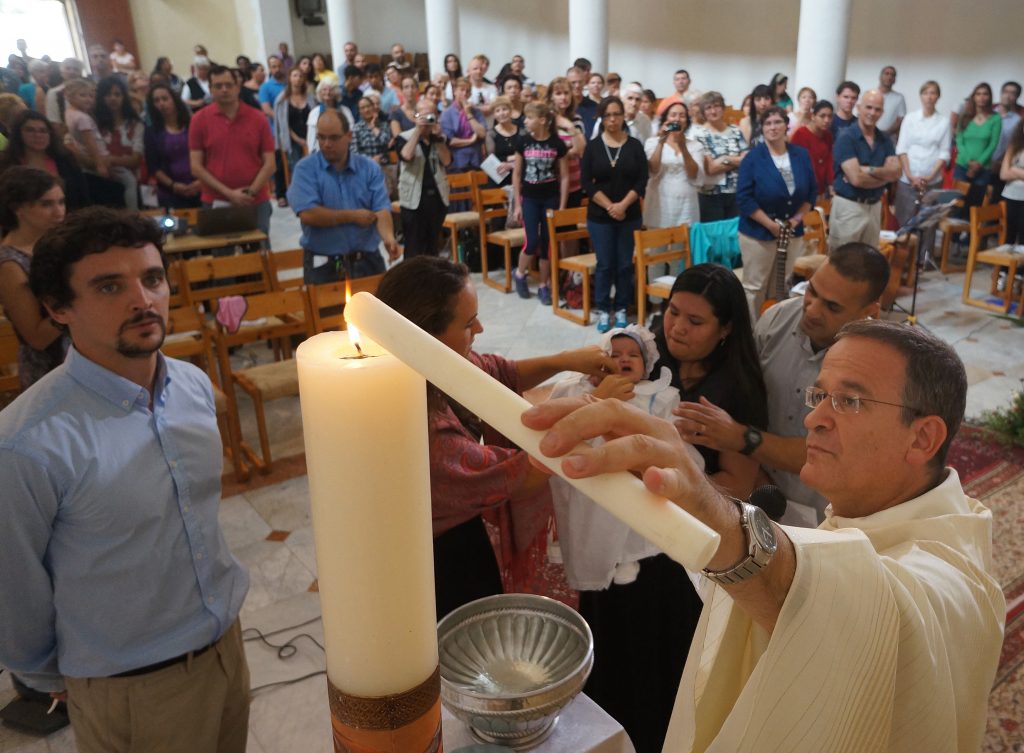 Jesuit Father David Neuhaus lights a baptismal candle during a Mass for Hebrew-speaking Catholics in Israel in 2014. (CNS photo/courtesy www.catholic.co.il)

The Catholic leaders noted that since the creation of Israel in 1948, Arab citizens have been struggling with manifestations of discrimination. The new law, they said, is a blow to the very democratic values protected and promoted by the Human Dignity and Liberty Basic Law passed by the Israeli Knesset in 1992.

Now one of Israel’s basic laws — something akin to a constitutional law which guides Israel’s legal system — it is more difficult to repeal than a regular law.

“We must draw the attention of the authorities to a simple fact: our faithful, the Christians, our fellow citizens, Muslim, Druze and Baha’i, all of us who are Arabs, are no less citizens of this country than our Jewish brothers and sisters,” said the statement.

Israel is about 75 percent Jewish, 18 percent Muslim, 2 percent Christian, and has Druze, Baha’i and others.

“The (Nation State) law promotes an inherent discriminatory vision. In fact, other than seriously downgrading the standing of the Arab language in relationship to the Hebrew language, the law totally ignores the fact that there (are) Palestinian Arabs and other major religious communities, Christians and Muslims as well as Druze and Baha’i, that are profoundly rooted in this land,” the Catholic leaders said.

“As Israelis and as Palestinian Arabs, we seek to be part of a state that promotes justice and peace, security and prosperity for all its citizens. As Christians, we take pride that the universal church was founded in Jerusalem and her first faithful were children of this land and its people,” they said. “We recognize that Jerusalem and the whole of this Holy Land is a heritage we share with Jews and Muslims, Druze and Baha’i, a heritage we are called upon to protect from division and internecine strife.”