Family inspired 20-year-old Stephanie Nuñez to begin drawing at a young age. “I really looked up to my sisters – my older sister specifically – just because I saw something she drew and I was just like, ‘How could you draw things so perfectly?’”

Although she considers herself to have not been perfect at art in her early years, the resources that local schools gave her helped Nuñez improve her craft.

The Holy Cross College sophomore recently completed a mural of Our Lady of Guadalupe at the South Bend-area school.

“I was never the neat student, like when somebody turns in a perfect coloring page. So it’s something I kind of wanted to get better at.” 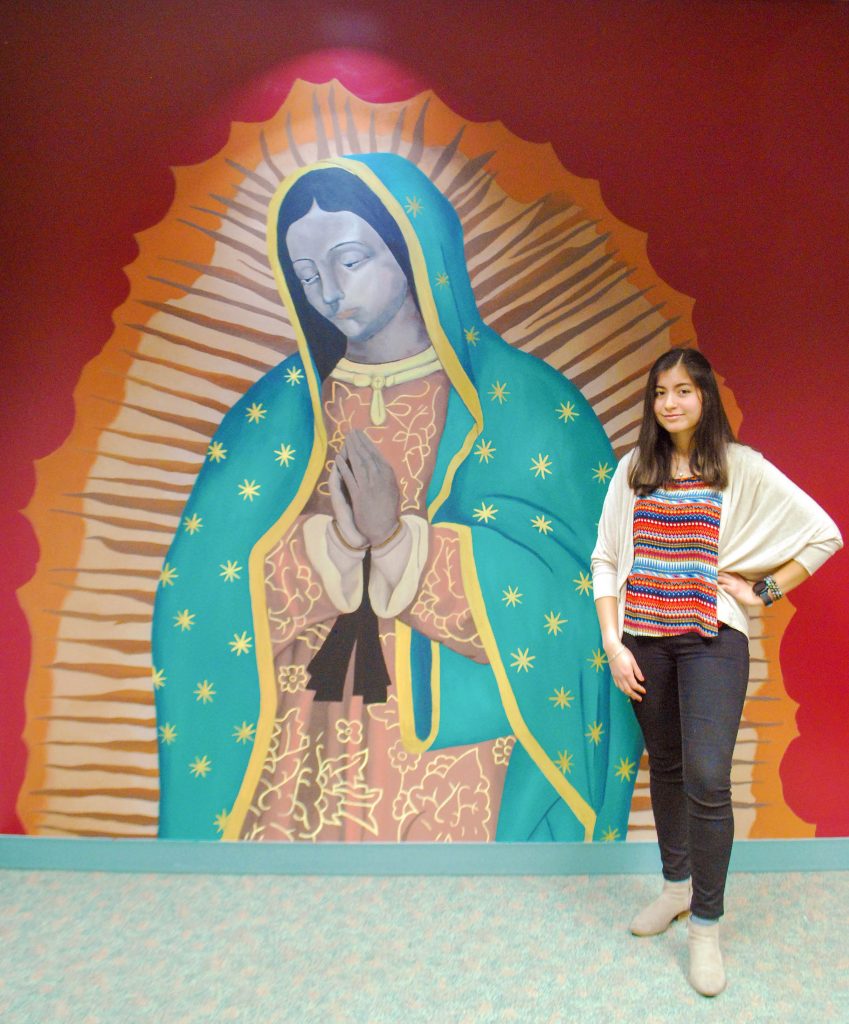 Nuñez says the idea for the mural of Our Lady came to her during an art class in her freshman year at Holy Cross when students were asked to paint a “portrait of love.”

“I had already painted a portrait of her, but smaller, for Painting I,” she recalled. Even before that, Nuñez remembered, she had taken an interest in this particular style of painting.

“Before coming into Holy Cross College, I had told my professor that I was kind of thinking about going into muralism. Or just like, having the goal of doing a few murals at some point in my life, even though I didn’t know if that would be necessarily the focus.”

Her professor offered her the opportunity to paint a mural of Our Lady of Guadalupe.

“That one was just to start off,” Nuñez explained. “And he also has plans for me to do a bigger one.”

While Nuñez was supposed to complete the mural last summer, she had to wait for a review board to approve the idea. After approval, the painting process took her 13 days, which was about 74 total working hours.

“So I didn’t get to it until winter break. And I just decided to do it then because I had time. And I wasn’t really planning to go anywhere, so I thought I should take advantage of that.”

Nuñez says that the decision to depict Our Lady of Guadalupe in the mural at Holy Cross College came not only from her experience in painting smaller portrayals of Our Lady, but also her familial background. She explained that her parents’ origin in Mexico influenced her, notably because her family has a “big tradition” of celebrating the feast day of Our Lady of Guadalupe every December.

Last semester, Nuñez was taking a class on evangelization taught by Dr. Louis Albarran, an associate theology professor at Holy Cross College. That class, she says, was largely focused around Our Lady of Guadalupe.

“In that class, we learned how she was like a union of two cultures.”

She compared this union to the mestizos in Mexico, the joining of the indigenous population and Spaniards into a mixed ethnicity.

“It’s kind of like the intertwining of faith and culture. My goal is to pursue that in my body of work that I develop here and forward for, possibly, an MFA degree.”

Before enrolling at Holy Cross, Nuñez studied at St. Joseph High School in South Bend. It was there that her talent was allowed to bloom into a potential future career. “I really didn’t consider it as a career path until my junior year of high school because I started really enjoying my art classes.”

St. Joseph High School, she said, gave her the tools that she needed to be successful in the field of visual arts. “It was kind of cool to see how I had access to a lot of resources in high school. We didn’t have to buy anything personally. The resources were all there. And there were different mediums that we could experiment with.”

These refined skills led to larger art projects for Nuñez and her classmates during high school. She and a handful of other art students were offered the opportunity to help paint murals for the theology hallway. “And so, I thought that was something really cool to do right before school was going to start in my senior year.”

In fact, a mural that Nuñez painted at St. Joseph High School is featured on the diocesan confirmation retreat website online.

It seems that Nuñez’s artistic prowess will continue to spread through the diocese as she completes projects at Holy Cross College, and her finished artwork will continue to stand as inspiration for many years to come. Nuñez is on track to graduate in 2024 with a degree in visual arts.