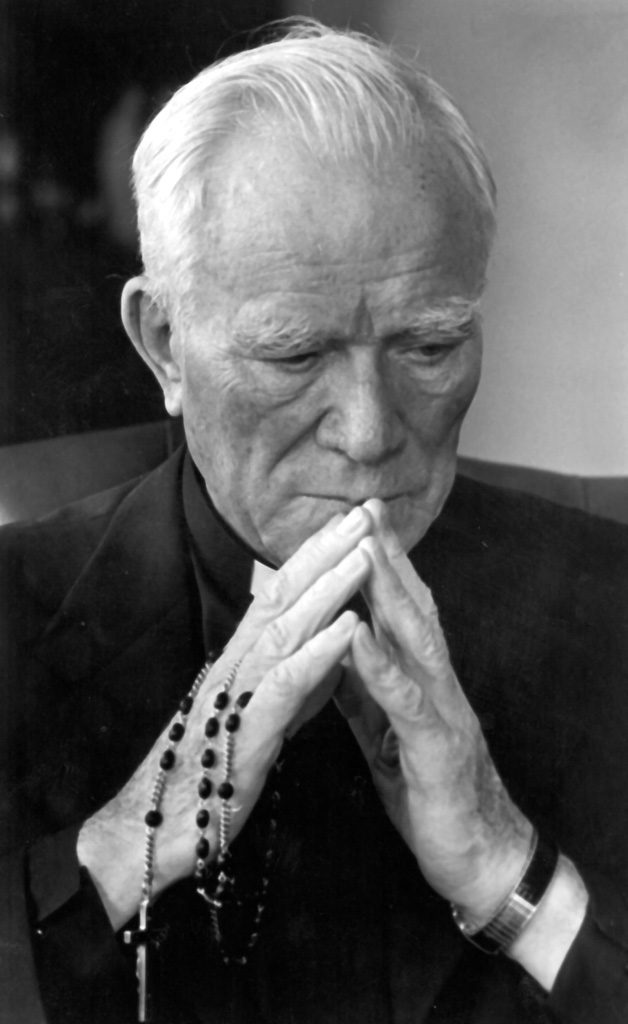 The pope approved the decrees recognizing their heroic virtues during an audience Dec. 18 with Cardinal Angelo Amato, prefect of the Congregation for Saints’ Causes.

The pope also recognized the miracles needed for the beatification of: Jesuit Father Tiburcio Arnaiz Munoz of Spain; Father Jean-Baptiste Fouque of France; and Sister Maria Carmen Rendiles Martinez of Venezuela. He also recognized the martyrdom of Father Teodoro Illera del Olmo, a member of the Congregation of St. Peter in Chains, and 15 companions, who were killed during the Spanish Civil War in 1936 and 1937.

Father Peyton, known worldwide as “The Rosary Priest,” was a Catholic media pioneer in the 1940s, using radio and later television to produce popular programs featuring Hollywood stars and other celebrities to promote family prayer.

His ministry produced more than 600 radio and television programs and 10,000 broadcasts. The priest also conducted rosary crusades for millions of people in dozens of countries. He had two especially famous mottos: “The family that prays together stays together” and “A world at prayer is a world at peace.”

Father Peyton emigrated from Ireland to the United States in 1928 when he was 19, with his heart set on becoming a millionaire after his dream of becoming a priest was thwarted when a seminary turned down his scholarship request.

He found a job as a sexton in the cathedral of Scranton, Pennsylvania, and he and his brother joined the seminary and were ordained in the Congregation of the Holy Cross in 1941.

Father Peyton’s first assignment was as chaplain in Albany, New York, where he launched a project to promote praying the rosary and family life. He had a special devotion to Our Lady of the Rosary after attributing his recovery from tuberculosis to her intercession.

Father Peyton died in 1992. After the pope’s decree recognizing his heroic virtues, in general, a miracle is needed for his beatification and a second one for his canonization.

Cardinal Wyszynski was primate of Poland from 1949 until his death from cancer in 1981. He was Poland’s youngest bishop when he was installed as archbishop of Warsaw and Gniezno during the imposition of communist rule.

Despite Vatican misgivings, Cardinal Wyszynski signed the first Church accord in 1950 with a communist government, which promised the Church protection in return for encouraging “respect for state authorities.’’

Although the accord was quickly violated, he defended the intentions behind it in posthumously published diaries, compiled while he was imprisoned without formal charges from 1953 to 1956 by Poland’s ruling communists.

“I was of the opinion the modern world needed the martyrdom of work, not of blood,’’ the cardinal wrote.

“It seemed possible, as well as indispensable, to establish several points in a ‘modus vivendi’ if the Church was to avoid a new — perhaps accelerated and drastic — annihilation,’’ he wrote.

Acknowledged by Poland’s ex-communists and anti-communists as one of their country’s greatest modern leaders, Cardinal Wyszynski was credited by former President Lech Walesa with laying the groundwork for the rise of the Polish trade union, Solidarity, and the eventual fall of communism in Eastern Europe.

Among his proteges was the future St. John Paul II. When then-Father Karol Wojtyla was appointed auxiliary bishop of Krakow, the cardinal presented him to a group of priests, saying “Habemus papam” (“We have a pope”).

“In the light of later events, one could say those were prophetic words,” the pope wrote.

Cardinal Wyszynski also told him at the 1978 conclave, “If they elect you, do not refuse it.’’

The newly elected Pope John Paul told the cardinal there would have been “no Polish pope’’ without his “faith, heroic hope and limitless confidence in the Mother of God.’’

Among the other decrees Dec. 18, Pope Francis recognized the heroic virtues of three priests, three religious women and one Italian laywoman.