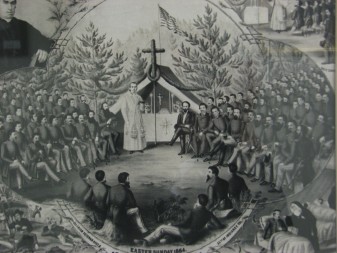 Responding to the needs of a nation at war

NOTRE DAME — “We were not trained as nurses, but our hearts made our hands willing and, with God’s help, we did much to alleviate the dreadful suffering.” — From the memoirs of Sister Augusta Anderson.

It should not be a surprise to anyone who knows the mission of the Sisters of the Holy Cross to address the critical needs of the Church and the world, that when in October of 1861 the congregation responded affirmatively to Oliver P. Morton, governor of Indiana’s request for sisters to care for the wounded in the Civil War. His request came on Oct. 21 and many sisters — none of them trained — immediately volunteered.

The next day Sister Mary of St. Angela and six others departed for Cairo at the southern tip of Illinois, 500 miles from Notre Dame. There General Ulysses S. Grant assigned them to the military hospital in Paducah, Ky. Thus began the congregation’s involvement in the Civil War.

Paducah was only the beginning. They served so well there that Simon Cameron, President Abraham Lincoln’s Secretary of War, asked the congregation to take over the nursing at a government hospital in Louisville. More sisters were sent to care for the wounded at a newly- opened hospital in Mound City, Ill.

The conditions in all of these hospitals were deplorable. They were unsanitary, which caused outbreaks of typhoid, small pox and other diseases that not only affected the wounded but also family members and the medical personnel. The sisters did much to address these problems the best they could.

Sister Paula Casey describes her first visit to a military hospital in Cairo as a fearful experience:

“Every room on the first floor was strewn with human legs and arms. As the wounded were brought in from the battlefield, they were laid anywhere, and amputations took place. Some of the wards resembled a slaughter house, the walls were so splattered with blood.”

After her tour of the hospital given by William Burke, the doctor in charge, Sister Paula and her two companions immediately pinned up their habits and with buckets of water and brooms swept and scrubbed the hospital wards until they were clean. Actions such as this helped to alleviate the fear the soldiers and the sailors had of military hospitals.

In June of 1862 several sisters were asked to serve as nurses aboard the U.S.S. Red Rover, the first Navy hospital ship that went up and down the Mississippi River carrying the sick and wounded of both sides to the various military hospitals.

Sister Adele Moran reflects upon her experience: “In company with two or three other sisters I was sent on board the hospital boat called the Red Rover, which carried the sick and wounded to the hospitals. I never left the boat till the close of the war. We were near Vicksburg when it was taken, could see the boats running the blockade.”

Since the Red Rover belonged to the Navy, the sisters who served are recognized as the forerunners of the Navy Nurse Corps and were the first paid women employees of the United States Navy. The Navy has honored these sisters with a special headstone placed on their graves in the congregation’s cemetery. Each sister also received military pension, which helped pay for the congregation’s administration building.

The sisters also staffed a hospital in Memphis and the St. Aloysius Military Hospital in the capital. As the number of hospitals confided to their care by the federal government increased more and more sisters were sent from Saint Mary’s and Notre Dame to serve.

Before the war ended, approximately 80 of the 160 sisters served in the war.

This wartime nursing was the beginning of the Sisters of the Holy Cross’ ministry in health care.