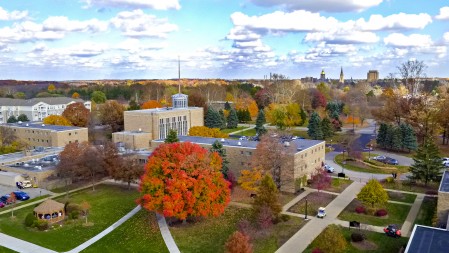 A view of Holy Cross College as it stands today; the Saint Joseph Chapel is at center left.

Among the plethora of postsecondary institutions in the modern day, Holy Cross College at Notre Dame, Ind., genuinely stands out for its mission to “educate and form global citizens with the competence to see and the courage to act,” a sentiment that comes directly from Father Basil Moreau, founder of the Congregation of Holy Cross.

“The sacred duty we hold at Holy Cross is to educate all those who need and desire it, according to our mission,” said Brother John Paige, current president of the college. “A truly meaningful college education is about more than just intelligence. Holy Cross has always sought to provide its students with information, but also relationships and experiences for the purpose of lasting formation and transformation.”

Holy Cross College dates back to 1966, when it was established by the Congregation of Holy Cross as a two-year junior college primarily to educate other Holy Cross Brothers. In those early years, there were only two brother-professors: Brother John Driscoll, who served as president, and Brother James Leik, the college administrator. They soon found that the community was interested in the little school. Brother James, who is still the archivist at Holy Cross College, explained that it expanded almost immediately, mainly due to a simple request. “A (local) boy came into the school and asked if he could go there. We said yes. The next year, his sister asked if she could attend, and we said, ‘Why not? We’re brothers. We teach everyone.’”

The college continued to grow, yet remain focused on its mission of using a practical, experiential liberal arts curriculum to lead even more young people “to wholeness in the image of Christ.” In its first 10 years, the enrollment increased from 105 to 275 co-ed students. In 1990 Holy Cross gladly welcomed a new name, dropping “Junior” from its name and becoming simply Holy Cross College.

Interestingly, Holy Cross received unexpected international fame through the 1993 movie, “Rudy.” It chronicled the story of Daniel Eugene “Rudy” Ruettiger, who longed to play football for the University of Notre Dame and was given the opportunity to fulfill his dreams by way of first attending Holy Cross Junior College. A benevolent priest assisted Rudy in obtaining the necessary scholarships for attending, and encouraged him to acquire excellent grades in order to transfer to Notre Dame.

Holy Cross introduced its four-year baccalaureate program in 2003. Since then, it has joined the National Association of Intercollegiate Athletics and graduated 638 B.A. students. However, the Rudy story is a familiar one to many Holy Cross alumni, as they also became a part of the Holy Cross family because of and through its past and continued connection to Notre Dame. The college maintains pride in being part of Rudy’s legend, but also myriad other success stories, through its commitment to helping transform good students into excellent students capable of admissions into the nation’s finest universities.

This year, the college celebrated its 50th anniversary and planned several events to give alumni, parents and friends who have attended and supported the college a chance to come together for community, fellowship and education about the its future plans. Holy Cross has also launched a $10 million capital campaign to provide campus improvements and scholarship expansion for current and future students.

The kick-off anniversary celebration occurred on Sept. 17 with the annual Welcome Back Picnic, where more than 300 students, faculty, alumni, parents and friends gathered for food, games and fellowship on campus. The college’s official Founders’ Day was celebrated on Sept. 19, with the dedication of a new statue of St. Brother André Bessette of Montreal and a Mass celebrated by Rev. Tom McNally, who also gave the first Mass in Saint Joseph Chapel in 1966. Several other anniversary events are scheduled to occur through June 2017: A complete schedule can be found at www.hcc-nd.edu/50years.

Throughout the decades, the college has remained true to its mission to serve its global community of students through experiential education. It is among only a handful of institutions of higher education that accept Iraqi students as an act of goodwill to help foster peace and understanding between the two countries. Additionally, Holy Cross College uniquely serves its nontraditional students through educational programs at Westville Correctional Facility and the Indiana Women’s Prison. This year, the school’s enrollment of 647 includes students from all 50 states and 18 countries.

Though not considered an Ivy League institution of higher learning and not among the largest in the nation, Holy Cross College has not waivered from its original Catholic roots. Everything from its founding to acceptance of students of all nationalities and creeds, as well as each building project and expansion of the campus, reflects its Catholic values and serves as a reminder within the diocese and throughout the country of what authentic learning is really about — the classroom that the world presents us, embraced through experience, discernment and prayer.