VATICAN CITY (CNS) — God calls all Christians to be saints — not plastic statues of saints, but real people who make time for prayer and who show loving care for others in the simplest gestures, Pope Francis said in his new document on holiness.

“Do not be afraid of holiness. It will take away none of your energy, vitality or joy,” the pope wrote in “Gaudete et Exsultate” (“Rejoice and Be Glad”), his apostolic exhortation on “the call to holiness in today’s world.”

Pope Francis signed the exhortation March 19, the feast of St. Joseph, and the Vatican released it April 9.

Much of the document was written in the second person, speaking directly to the individual reading it. “With this exhortation I would like to insist primarily on the call to holiness that the Lord addresses to each of us, the call that he also addresses, personally, to you,” he wrote near the beginning. 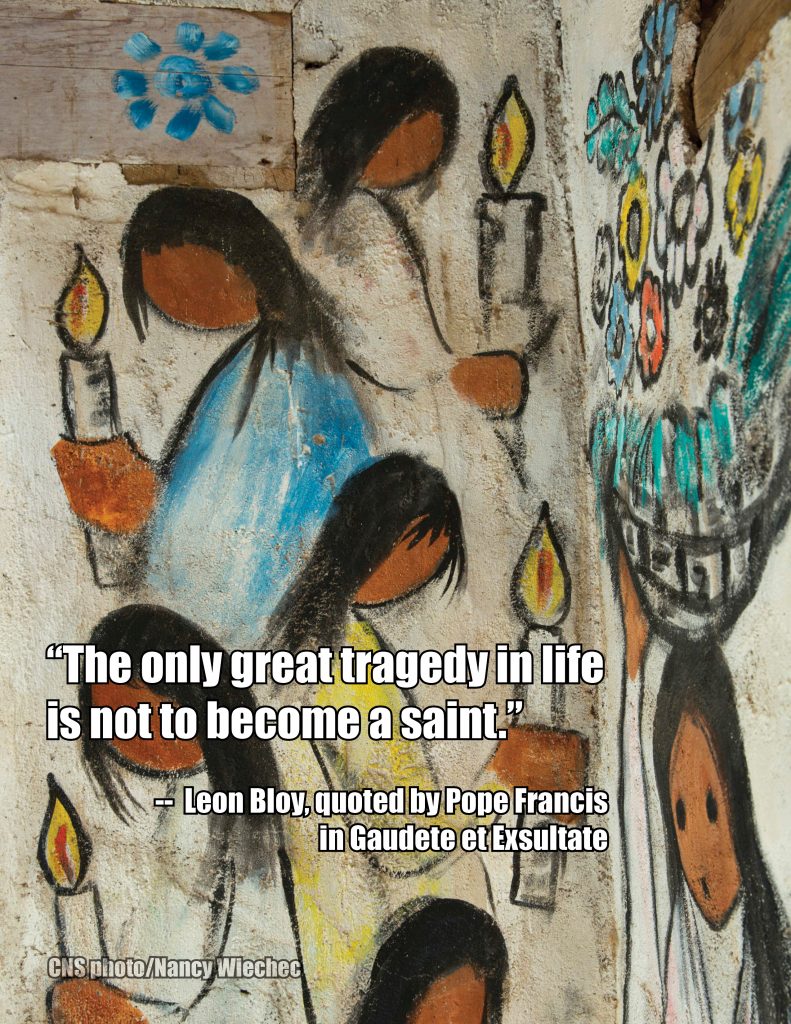 This image contains a quote from Pope Francis’ exhortation, “Gaudete et Exsultate” (“Rejoice and Be Glad”), on the “call to holiness in today’s world.” (CNS photo/Nancy Wiechec)

Saying he was not writing a theological treatise on holiness, Pope Francis focused mainly on how the call to holiness is a personal call, something God asks of each Christian and which requires a personal response given one’s state in life, talents and circumstances.

“We are frequently tempted to think that holiness is only for those who can withdraw from ordinary affairs to spend much time in prayer,” he wrote. But “that is not the case.”

“We are all called to be holy by living our lives with love and by bearing witness in everything we do, wherever we find ourselves,” he said.

He wrote about “the saints next door” and said he likes “to contemplate the holiness present in the patience of God’s people: in those parents who raise their children with immense love, in those men and women who work hard to support their families, in the sick, in elderly religious who never lose their smile.”

Pope Francis also noted the challenges to holiness, writing at length and explicitly about the devil just two weeks after an uproar caused by an elderly Italian journalist who claimed the pope told him he did not believe in the existence of hell.

“We should not think of the devil as a myth, a representation, a symbol, a figure of speech or an idea,” the pope wrote in his exhortation. “This mistake would lead us to let down our guard, to grow careless and end up more vulnerable” to the devil’s temptations.

“The devil does not need to possess us. He poisons us with the venom of hatred, desolation, envy and vice,” he wrote. “When we let down our guard, he takes advantage of it to destroy our lives, our families and our communities.”

The path to holiness, he wrote, is almost always gradual, made up of small steps in prayer, in sacrifice and in service to others.

Being part of a parish community and receiving the sacraments, especially the Eucharist and reconciliation, are essential supports for living a holy life, the pope wrote. And so is finding time for silent prayer. “I do not believe in holiness without prayer,” he said, “even though that prayer need not be lengthy or involve intense emotion.”

“The holiness to which the Lord calls you will grow through small gestures,” he said, before citing the example of a woman who refuses to gossip with a neighbor, returns home and listens patiently to her child even though she is tired, prays the rosary and later meets a poor person and offers him a kind word.

The title of the document was taken from Matthew 5:12 when Jesus says “rejoice and be glad” to those who are persecuted or humiliated for his sake.

The line concludes the Beatitudes, in which, Pope Francis said, “Jesus explained with great simplicity what it means to be holy”: living simply, putting God first, trusting him and not earthly wealth or power, being humble, mourning with and consoling others, being merciful and forgiving, working for justice and seeking peace with all.

The example of the saints officially recognized by the Church can be helpful, he said, but no one else’s path can be duplicated exactly.

Each person, he said, needs “to embrace that unique plan that God willed for each of us from eternity.”

The exhortation ends with a section on “discernment,” which is a gift to be requested of the Holy Spirit and developed through prayer, reflection, reading Scripture and seeking counsel from a trusted spiritual guide.

“A sincere daily ‘examination of conscience’” will help, he said, because holiness involves striving each day for “all that is great, better and more beautiful, while at the same time being concerned for the little things, for each day’s responsibilities and commitments.”

Pope Francis also included a list of cautions. For example, he said holiness involves finding balance in prayer time, time spent enjoying others’ company and time dedicated to serving others in ways large or small. And, “needless to say, anything done out of anxiety, pride or the need to impress others will not lead to holiness.”

Being holy is not easy, he said, but if the attempt makes a person judgmental, always frustrated and surly, something is not right.

“The saints are not odd and aloof, unbearable because of their vanity, negativity and bitterness,” he said. “The apostles of Christ were not like that.”

In fact, the pope said, “Christian joy is usually accompanied by a sense of humor.”

The exhortation included many of Pope Francis’ familiar refrains about attitudes that destroy the Christian community, like gossip, or that proclaim themselves to be Christian, but are really forms of pride, like knowing all the rules and being quick to judge others for not following them.

Holiness “is not about swooning in mystic rapture,” he wrote, but it is about recognizing and serving the Lord in the hungry, the stranger, the naked, the poor and the sick.

Holiness is holistic, he said, and while each person has a special mission, no one should claim that their particular call or path is the only worthy one.

“Our defense of the innocent unborn, for example, needs to be clear, firm and passionate for at stake is the dignity of a human life, which is always sacred,” the pope wrote. “Equally sacred, however, are the lives of the poor, those already born, the destitute, the abandoned and the underprivileged, the vulnerable infirm and elderly exposed to covert euthanasia….”

And, he said, one cannot claim that defending the life of a migrant is a “secondary issue” when compared to abortion or other bioethical questions.

“That a politician looking for votes might say such a thing is understandable, but not a Christian,” he said.

Pope Francis’ exhortation also included warnings about a clear lack of holiness demonstrated by some Catholics on Twitter or other social media, especially when commenting anonymously.

“It is striking at times,” he said, that “in claiming to uphold the other commandments, they completely ignore the eighth, which forbids bearing false witness or lying.”

Printed copies of “Rejoice and Be Glad” can be ordered from the U.S. Conference of Catholic Bishops at: http://store.usccb.org/rejoice-and-be-glad-p/7-599.htm.