The towering slate-colored steeple of St. Peter Parish seems to rise majestically from the inner-city neighborhood where it’s located — a neighborhood that has known its share of struggle. Crossing the threshold into the church’s expansive worship space however, the breathtaking beauty of its architecture and appointments instantly allays the concerns of the outside world and puts worshippers on alert that this is the home of not just the holiest person in the city, but the world; the One in whom they can rest, the Reason for Our Hope, the King of Peace.

The spiritual oasis that is St. Peter Parish celebrated its sesquicentennial on Sunday, Jan. 8, with rich and joyous tones. Welcoming Bishop Kevin C, Rhoades for an anniversary Mass, two of its living former pastors, two ordained alumni of the former St. Peter School, parishioners, and neighbors gathered as one and raised their voices in songs of praise and gratitude for their parish’s steadfast legacy of faith.

St. Peter was founded as a German and French parish. Catholic immigrants from those countries had settled immediately southeast of the downtown area following the Civil War, and in 1871, a group of them, led by Peter Mettler, approached the second bishop of the Diocese of Fort Wayne-South Bend, Bishop Joseph Dwenger, and asked him to establish a parish in its midst. After receiving his blessing, the church was built and dedicated to the saint Mettler was named for: St. Peter, the Prince of the Apostles and the first pope. 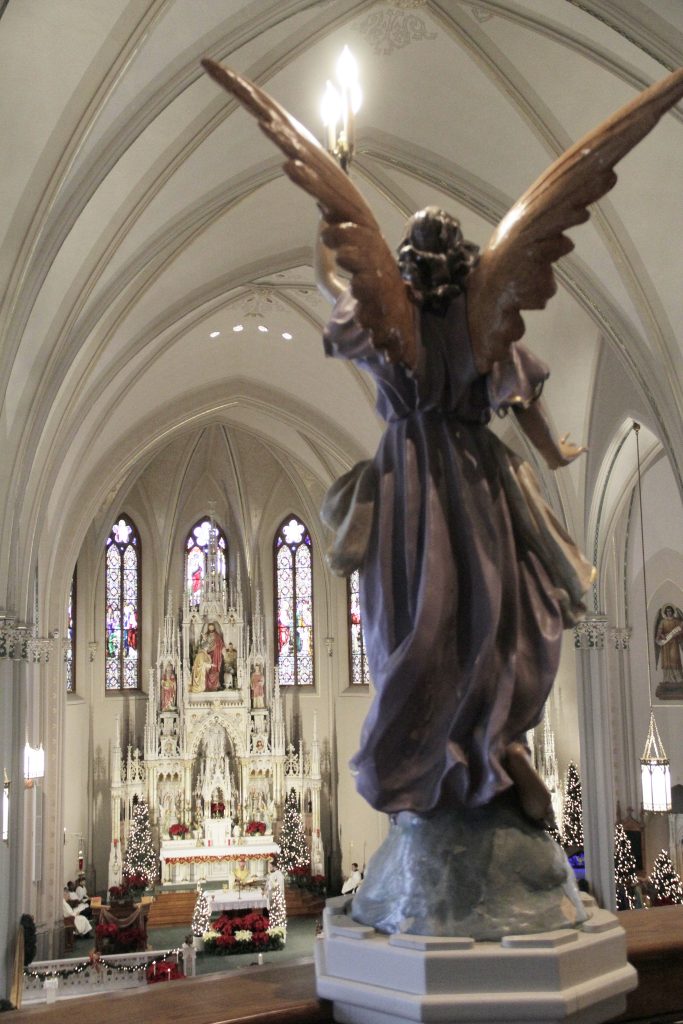 St. Peter Church Tours led by Fort Wayne Museum of Art
FORT WAYNE — The 150th anniversary celebration of St. Peter Parish continues on Saturday, Feb. 18, with tours of the historic sanctuary led by docents and researchers from the Fort Wayne Museum of Art.
Tours will be conducted throughout the day and are free of charge but restricted to those age 21 and older. Hors d’oerves and alcoholic beverages will be available between tours in the pavilion. For times of the tours, watch the parish bulletin online at www.saintpetersfortwayne.org or contact the parish office at 260-744-2765.

The parish’s first pastor represented both the history of the faith community and its future. Father John Wemhoff was himself a German immigrant who had moved to America and been ordained by the first Bishop of the Diocese of Fort Wayne-South Bend, Bishop John Henry Luers. Father Wemhoff oversaw the construction of the first St. Peter Church building and a school.

Under the direction of the parish’s second pastor, Father Anthony Wessman, a new and larger church was built by parishioner John Suelzer, Sr., whose company also became known for constructing the original St. Mary, Mother of God Church downtown. Gothic in style, St. Peter Church attracted attention for its imposing steeple and its beauty of design and attention to detail. It soon came to be called “the splendor of the south side of Fort Wayne.”

The lineage of pastors who were German immigrants continued until 1936, at which time its leadership came to include two American-born priests — Father Thiele and Father Bapst — who served for more than 30 years each. In recent years, since 1970, its shepherds have been Father Lawrence Kramer; Father Eugene Koers; Father Richard Hire; Father Jacob Gall; Father John Delaney; Father Phillip Widmann; Father Tyrell Alles, OSB; and current pastor Father Patrick Hake. 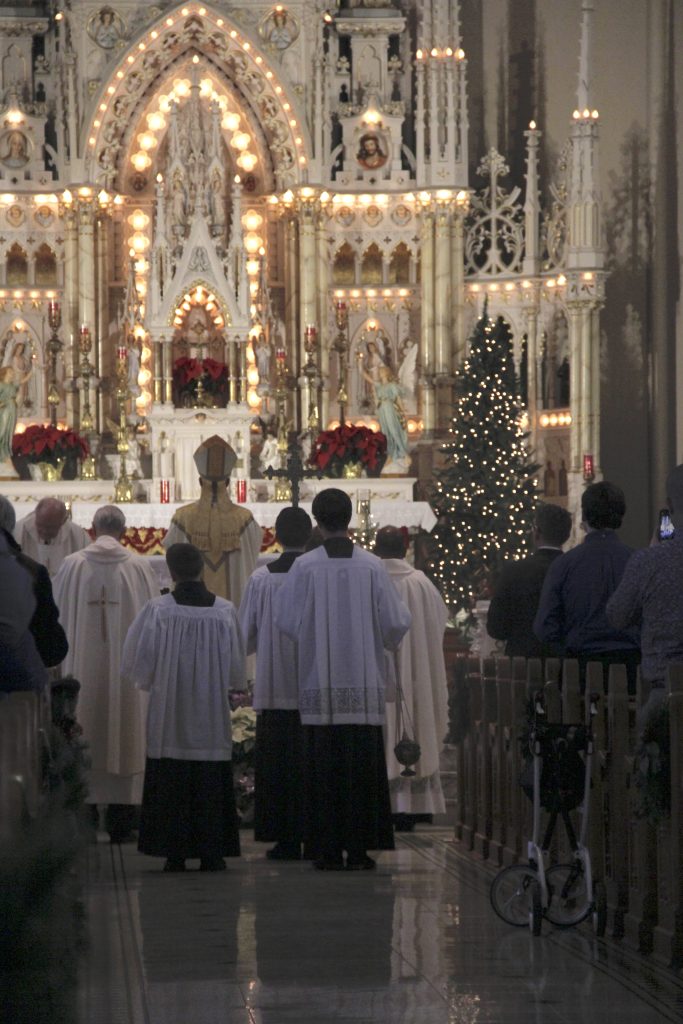 In 1991, the parish and school were placed on the National Registry of Historic Places. The entire church, rectory, and the building of the now-former school were deep-cleaned and redecorated for the occasion, which coincided with the parish’s 100th anniversary and a simultaneous revitalization of the surrounding neighborhood on which the parish collaborated. In 2005, the campus expanded to include a pavilion that still hosts parish gatherings.

In his homily, Bishop Rhoades acknowledged the parish’s illustrious history and expressed hope that it would continue to embrace its role in the near south-side neighborhood.

“St. Peter’s Parish would not be here today nor have flourished these past 150 years without the faith, devotion, sacrifices, and active involvement of the laity,” he told those present. “You and your ancestors in the faith here at St. Peter’s have prayed here, worshipped here, and participated in so many different ways to make this a vibrant community of faith, hope, and charity.” 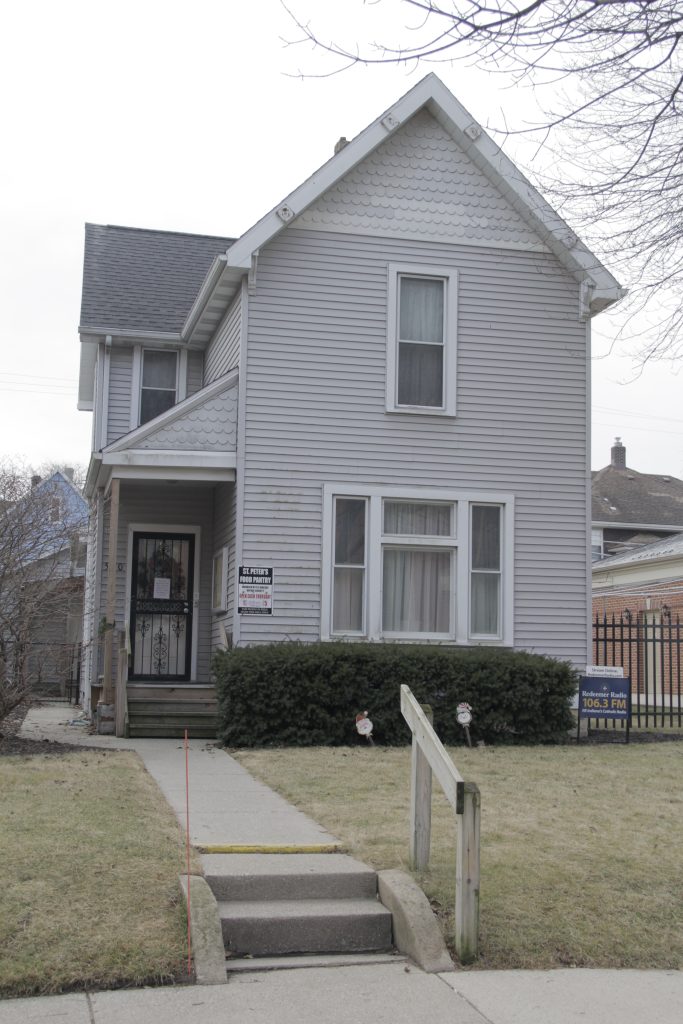 Jodi Marlin
The parish is an integral part of the Fort Wayne south side community. An active St. Vincent de Paul Society chapter, which operates out of this home on the parish grounds, plays a critical role in times of need and has assisted thousands of individuals and families with food and financial assistance. It is also a Community Harvest Food Bank distribution site.

In a similar way to how parishioners of St. Peter have come for decades to worship the child Jesus, depicted in the arms of His mother in an imposing sanctuary alcove, the Magi also found the child in the arms of His mother, Mary and adored Him, the bishop said. The Gospel says they were overjoyed when they encountered Him, and offered Him their precious gifts of gold, frankincense, and myrrh.

“They adored the Lord, the King of heaven and earth, the Son of God who humbled Himself in assuming our human nature, who did so out of love for us,” he said. “As we profess in the Creed, “for us men and for our salvation, He came down from heaven.”

The Lord still humbles Himself and descends from heaven, becoming present on the altar under the form of bread and wine, he continued. We offer Him the gifts of praise, of our suffering, our work, and our lives, he said, which in the Eucharistic sacrifice are united with the offering of Christ.

“As you know, we are in the midst of a three-year Eucharistic Revival in our country. Let us pray for a renewed commitment to Sunday Mass and adoration of Jesus in the Blessed Sacrament among the people of our diocese and throughout our nation. Let us imitate the Magi! May we embrace more fully their faith, their courage, and their humility!”

Remembered in prayer were all the laypeople, priests, and religious of St. Peter Parish who have gone before, as well as Pope Benedict XVI, who passed into eternal rest on Dec. 31. Bishop Rhoades prayed that parishioners of St. Peter would continue to make it a beacon of the faith in that area of Fort Wayne and that Mary, St. Peter, and the Magi would intercede for them.