People in Fort Wayne still jokingly ask residents of the small town of Monroeville, “Monroeville, are you guys still there?”

It’s an ongoing joke, but St. Rose of Lima Parish in Monroeville is most definitely still there. It has even put itself literally on the map this year: Both the church and the rectory were accepted into the National Registry of Historic Places Aug. 27.

St. Rose staff learned about the designation when a letter was sent to Bishop Kevin C. Rhoades Sept.1 from the Indiana State Historic Preservation Office. A certificate will be presented to parish representatives at the 2021 Indiana State Fair. 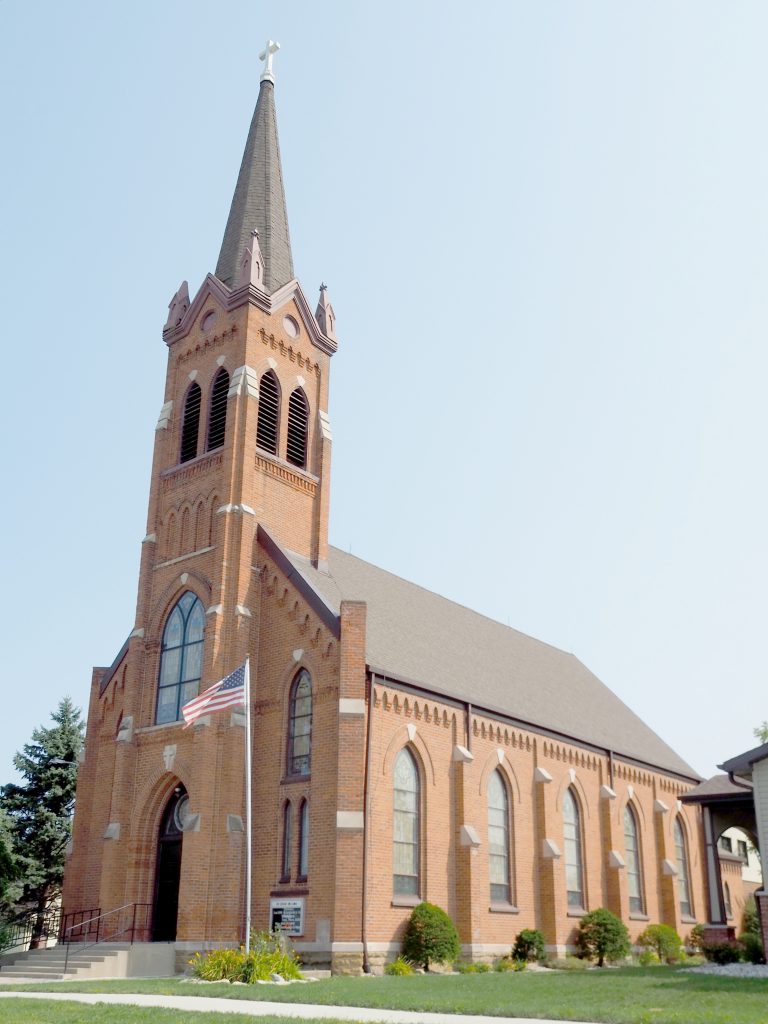 Photos by Jennifer Barton
The current St. Rose of Lima Church building has been placed on the National Registry of Historic Places. The designation honors its age of more than 100 years and qualifies the parish for potential funding to restore it to its original glamour.

The process was a long and sometimes rocky one, the idea stemming from the parish’s sesquicentennial celebration in 2018. Blane Ryan, parishioner and retired high school history teacher, spearheaded the campaign with the full backing of the parish. He worked with the Architecture and Community Heritage organization of Fort Wayne and historic preservationist Jill Downs to complete the application process and even helped fund the first application personally.

Father Lourdino Fernandes, affectionately known to his parishioners as Father Dino, was pastor of St. Rose at the time and gave Ryan permission. The first petition was rejected, but the parish refused to give up. 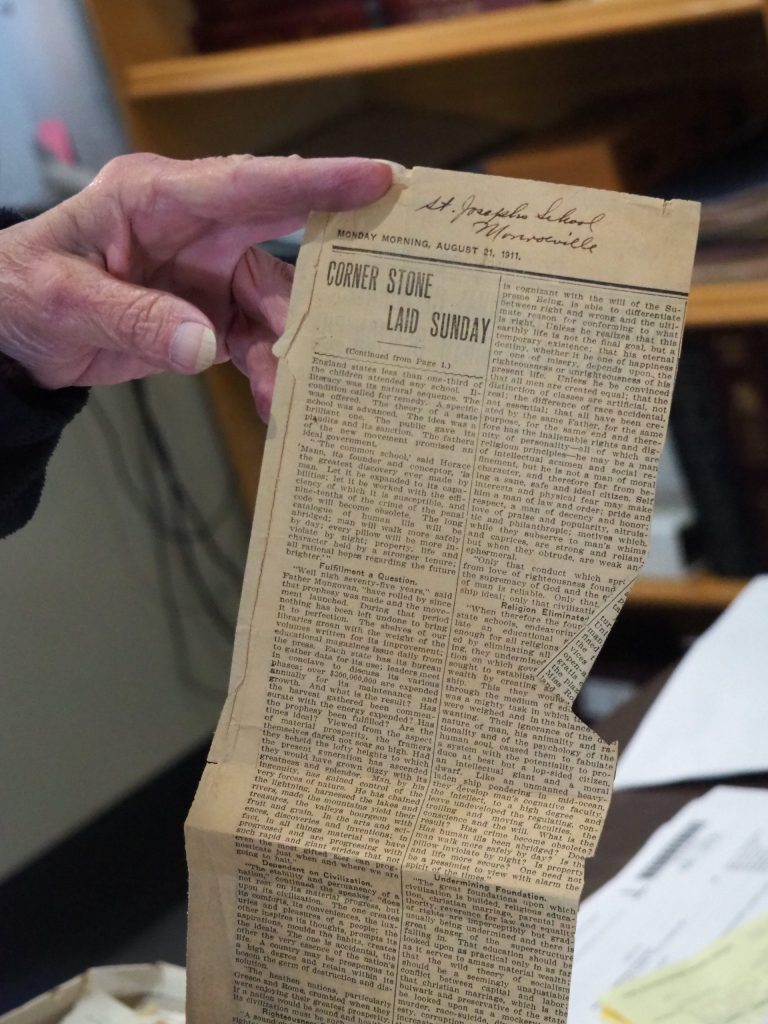 A newspaper clipping attests to the 1911 construction of the parish school.

Few churches are listed on the National Historic Registry, according to Ryan. “Since St. Rose has always been a huge part of the community and we have quite a strong presence in Monroeville … it would be fitting to see if we could get national historic landmark status,” he said. “What really started sparking a lot of interest in the community was when we sold a calendar having old pictures of the church, which is really quite something. Kind of got the idea rolling around in my head.”

Ryan believes the final decision by the state of Indiana was influenced by the fact that the church had been designed by famous Fort Wayne architects Wing and Mahurin. The duo designed many other buildings in the area, including the former city hall and Brookside Manor, home of Fort Wayne Foundry owner John Bass. 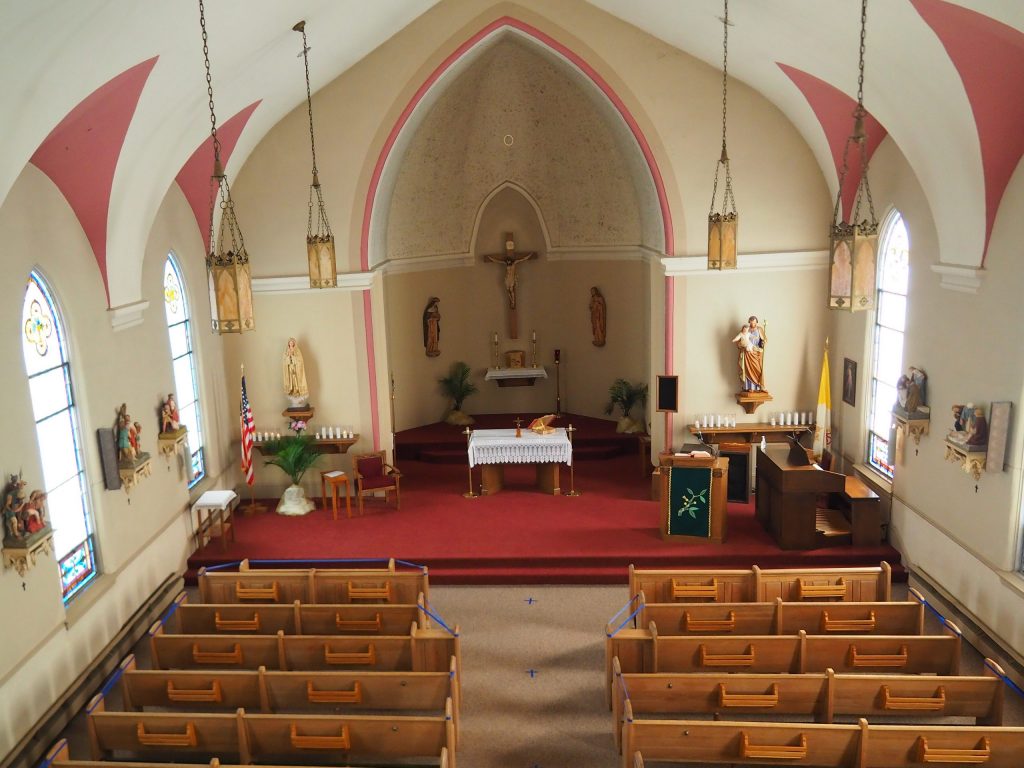 St. Rose parishioner Blane Ryan spearheaded the effort to recognize the church’s historic status. He hopes it will bring visitors to the parish and increase the possibility of future restoration.

While historic, the current church is not the original building from the parish’s founding in 1868. That building was lost to a fire in 1887 and rebuilt the next year. Only the Stations of the Cross and the bell were salvaged from the original church.

The current church has gone through many changes throughout the years, and now Ryan hopes to “restore it back to its former glory. Not that it’s not beautiful now, but it is God’s house.”

He compared his ideas for St. Rose to the similar churches of St. Louis, Besancon in New Haven and St. Peter in Fort Wayne, which are both known for their beautiful and historic sanctuaries. Ryan wants people to enter the sanctuary and be awed by the beauty of the church and lift their thoughts to God.

With a bicycle path running through town and the Monroeville Community Center offering showers and laundry services to cyclists, Ryan sees this as an opportunity for a historic stop along the route. A sign designating the historic site could bring more people to St. Rose, and he would love to amaze them with the church’s artistry.

More than anything, though, Ryan believes in preserving what was passed down by previous generations.

He clarified that even if a building is put on the registry, it doesn’t mean it cannot be changed or renovated; it simply means that these buildings have government support for preservation. “I’m a firm believer that we have to save some of the older buildings,” Ryan said. “We have to preserve the past for future generations. Tearing things down isn’t the answer.” 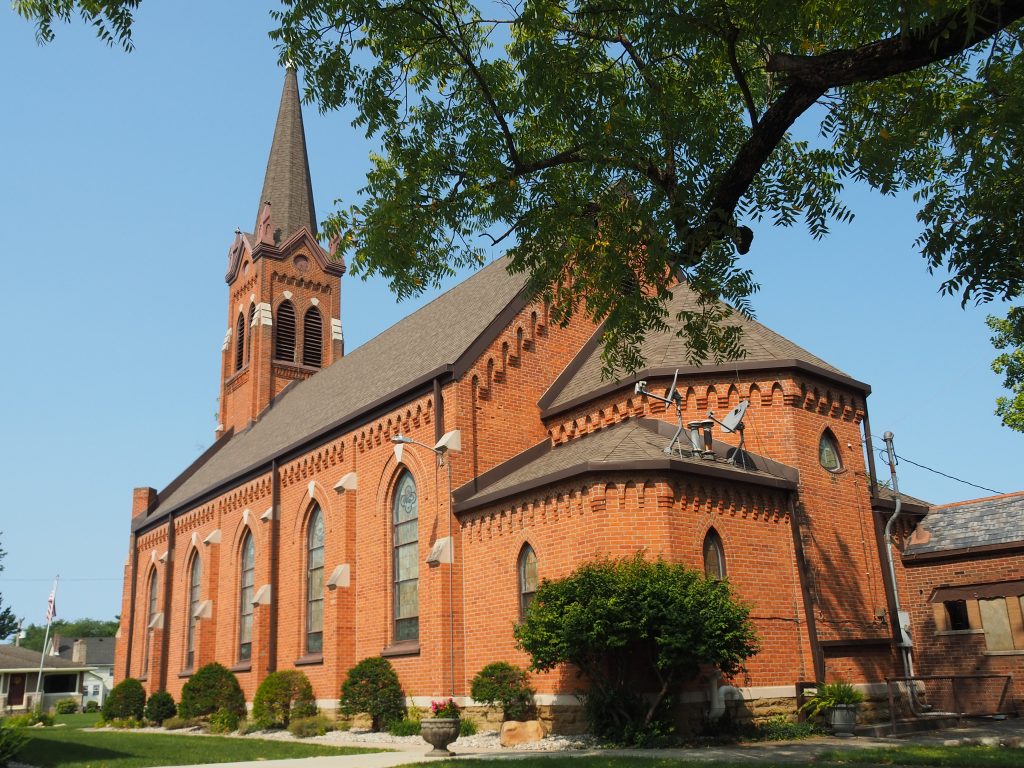 Backside view of the historic church.

That doesn’t mean the church hasn’t seen its share of demolition. In 2013, St. Rose purchased the former Monroeville Elementary School building a few blocks from the church and uses the location as the parish school. Around a hundred students are enrolled this year. The old St. Joseph School that was located next to the church was torn down to make way for a new parish hall, completed in 2019. The hall is named in honor of Father Fernandes.

Ryan hopes that with the historic designation, the parish can bring in grant money to fix some structural problems in both the church and the rectory. His plans are broad and long-reaching; he stated that he would like to see a “restoration, not a renovation,” completing the necessary work properly and beautifying the church so that it can be enjoyed by generations to come.

A project of that nature would take years to complete and come at a high cost. “We’re not exactly a rich parish,” Ryan conceded, but the financial aid that St. Rose could receive through its historic status may ease some of the financial burden. He sees that restoration as a means of uniting the parish toward a common goal.

Father Maicaal Lobo is the current pastor of St. Rose. He stated that the announcement is “good news.” “We hope to get funds” to repair and update the church, he confirmed. And there is certainly a need for repairs to the 132-year-old building — particularly to the plaster on the ceiling and to some masonry on the outside.

“We are a small community — about 225 families — who are very passionate to keep the building; they contributed to buy the school, build the new hall,” said Father Lobo. “St. Rose is a good parish. The people have been very generous, very cooperative.” He would love to see the building that has stood for so many years continue into the future, he said.