Crews have begun demolition of the old St. Joseph Hospital in downtown Fort Wayne. The hospital served generations of Fort Wayne residents since the late 1860s, and it stood on the city’s west side as a symbol of Catholic charity and the corporal works of mercy.

The hospital building itself has deep roots in Fort Wayne history, as well as local Catholic history. According to Michael Hawfield in an article for the News-Sentinel, Fort Wayne pioneer William Rockhill began construction of a hotel on the west side of the small town. Later called one of Indiana’s “finest luxury hotels,” the Rockhill Hotel became the center for a number of high-profile events in the city’s history. In fact, it was the starting place for a night of political defiance at the crest of a tense time in American history. 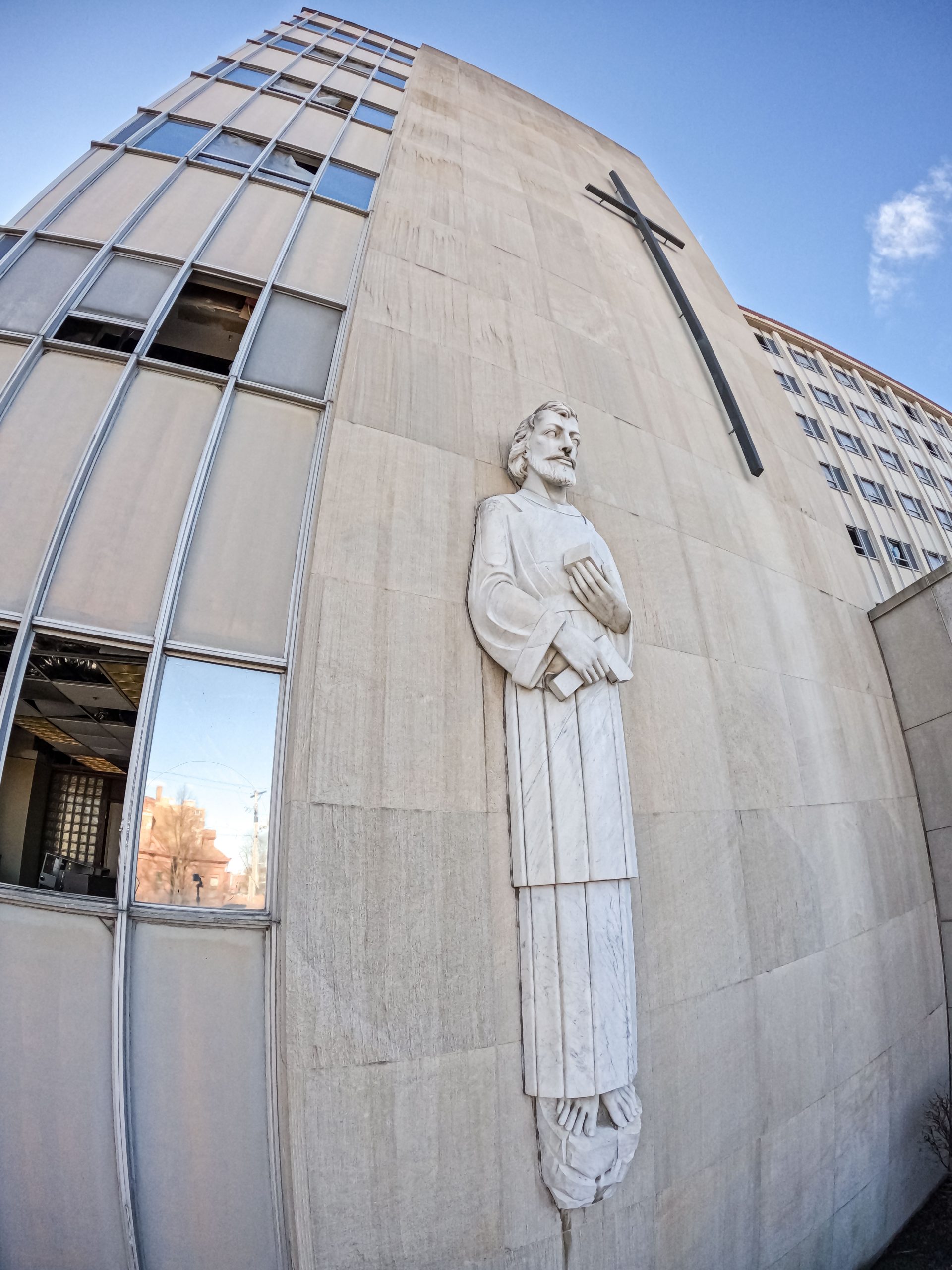 Shortly after the hotel’s debut, presidential candidate Stephen Douglas gave a campaign speech from the balcony of the Rockhill Hotel to a crowd of thousands of people. Douglas was running against Abraham Lincoln in the election that immediately preceded the Civil War.

After his speech at the hotel, Douglas was paraded around Fort Wayne. Historian John Ankenbruck reported that, during the celebration, “a huge saw log, intended to represent Lincoln, was flung into the St. Mary’s (River) as a defiant gesture of derision against the Republican candidate. Later in the day at sunset, it was ‘Everybody to the Courthouse’ where Democrats hanged a straw figure of Lincoln in effigy.” Allen County overwhelmingly voted for Douglas in the election. 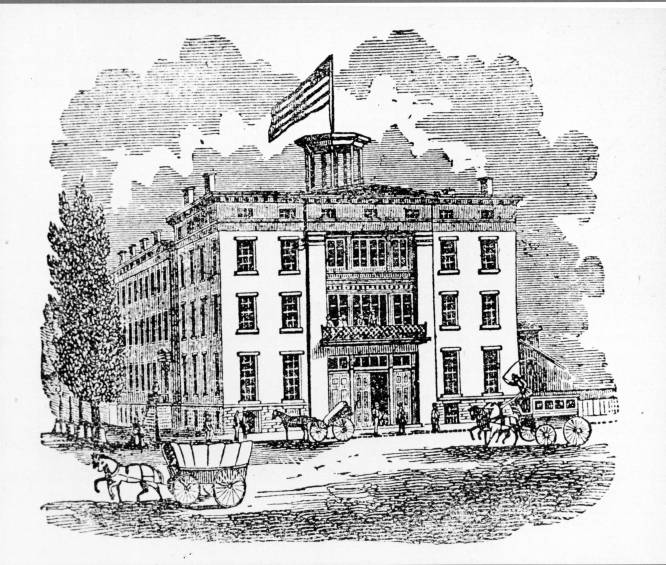 Before it was St. Joseph Hospital, the building was the Rockhill Hotel. It was the site of many civic celebrations and speeches during the mid-1800s. Bishop John Luers purchased the building to convert into a hospital during the late 1860s. (From the Allen County Public Library Collection, dated 1858)

Hawfield reported that the Rockhill Hotel closed in 1867, two years after the death of its owner and namesake. Around this time, the ongoing smallpox epidemic had highlighted the need for a hospital, and Bishop John H. Luers offered to purchase the abandoned building on the condition that the county and city would make the necessary renovations for a hospital. They declined, likely due to post-war economic conditions.

Bishop Luers persisted, purchasing the empty hotel “with his own money.” He led the formation of the St. Joseph’s Benevolent Association, which was tasked with raising money to convert the building into an operating hospital. A woman who would one day be recognized as a saint finally ensured that Fort Wayne residents would receive the medical care so greatly needed.

According to a story from WPTA ABC 21 News, Bishop Luers contacted Sister Catherine Kasper, who had recently founded the Poor Handmaids of Jesus Christ, to inquire if the congregation would be willing to staff the hospital.

“Almost all of the sisters volunteered to come to America,” Sister Carole Langhauser told WPTA. They took charge and opened the hospital in 1869. Sister Catherine sent much-needed assistance to Fort Wayne in the 19th century, and Pope Francis canonized her 150 years later as St. Katharina Kasper. The Poor Handmaids established their first American motherhouse at the hospital before moving to Donaldson in the 1920s.

The first surgery performed at St. Joseph Hospital occurred one month after its opening. According to the News-Sentinel, the first resident physician began practicing at the hospital in 1876. At the turn of the century, Fort Wayne annexed the hospital, bringing the facility into the city limits. The hospital’s first birth was on March 7, 1914.

New wings and facilities were added through the decades that followed, and the final remnants of the nearly century-old hotel where the hospital was built were destroyed by expansion in 1929, according to Hawfield. WPTA reported that the sisters sold the hospital to Quorum Health Group in 1998 after 129 years of ownership. The Poor Handmaids requested that at least one sister sit on the hospital’s board of directors. This request was upheld until the departure of Sister Langhauser in 2013. The News-Sentinel reported that Quorum Health Group was purchased by Triad Hospitals of Dallas in 2001, and Community Health Systems (CHS) purchased Triad Hospitals in 2007. CHS announced in 2018 that a new building would replace the dated St. Joseph Hospital. 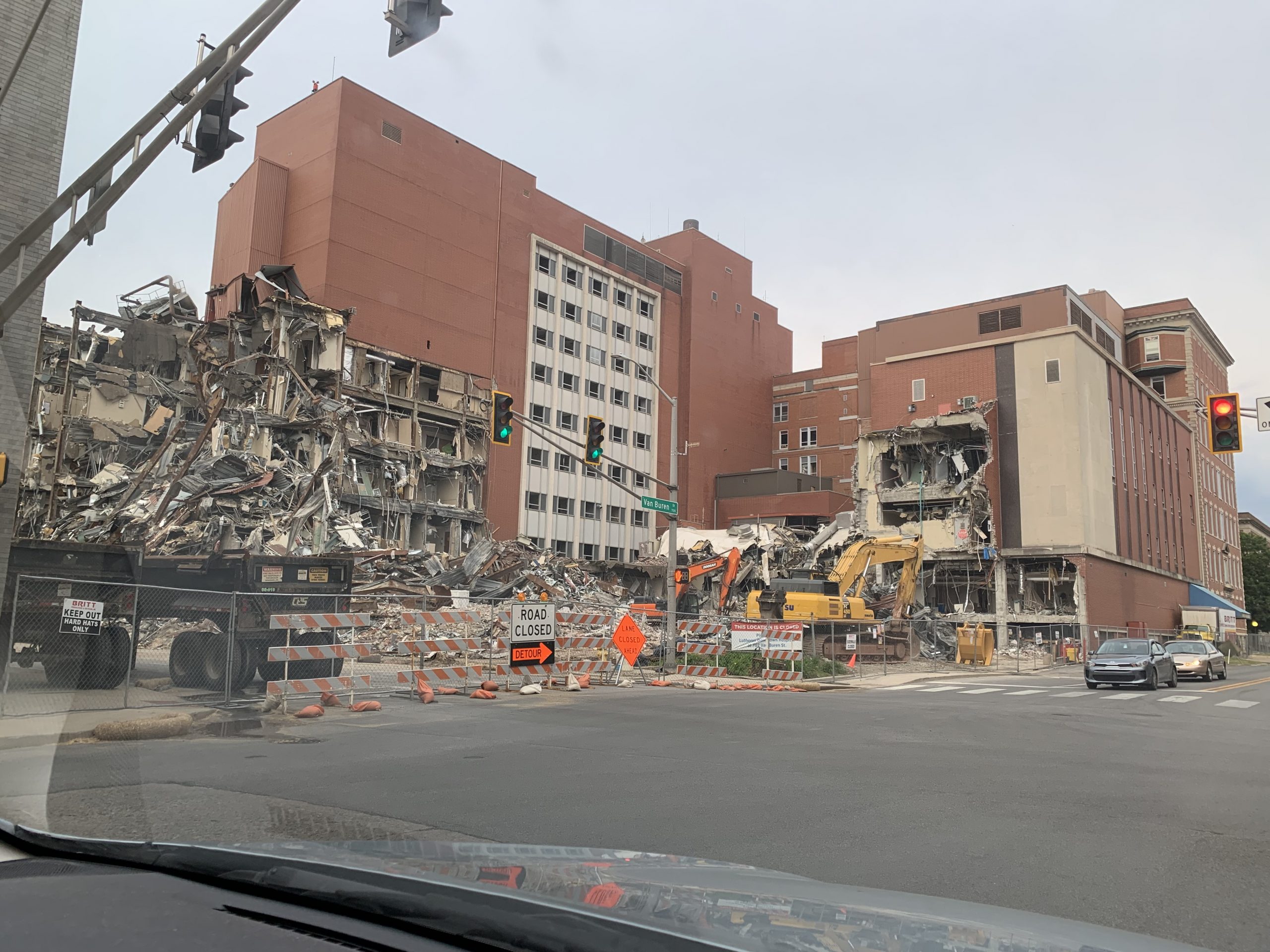 Demolition underway at the site of the old St. Joseph Hospital on Main and Broadway. The new hospital lies directly across Van Buren street. Photo by Francie Hogan

The new 194,000-square-foot Lutheran Downtown Hospital opened across the street from St. Joseph in November 2021 and includes 60 beds with room for future expansion. The burn unit that had previously been located at St. Joseph Hospital was moved to the Lutheran Hospital campus on Jefferson Boulevard.

While the building will disappear, the legacy of the hospital will live on. The statue of St. Joseph holding carpenter’s tools that watched over patients who entered St. Joseph Hospital through the years was obtained by Divine Mercy Funeral Home on Lake Avenue, and plans are in the works to repurpose the statue, according to executive director Casey Miller. Additionally, two crosses that were once part of the hospital will stand in the Catholic Cemetery’s rosary garden, and a third will be made in the same style to represent the two men who were crucified alongside Jesus.

“Anytime a cemetery, particularly a not-for-profit cemetery, can get a donation such as this, that’s a wonderful thing. And particularly with all the heritage and all the families that have been served – helped by that institution – I said we’ll locate a home for it here at Catholic Cemetery,” Miller stated.