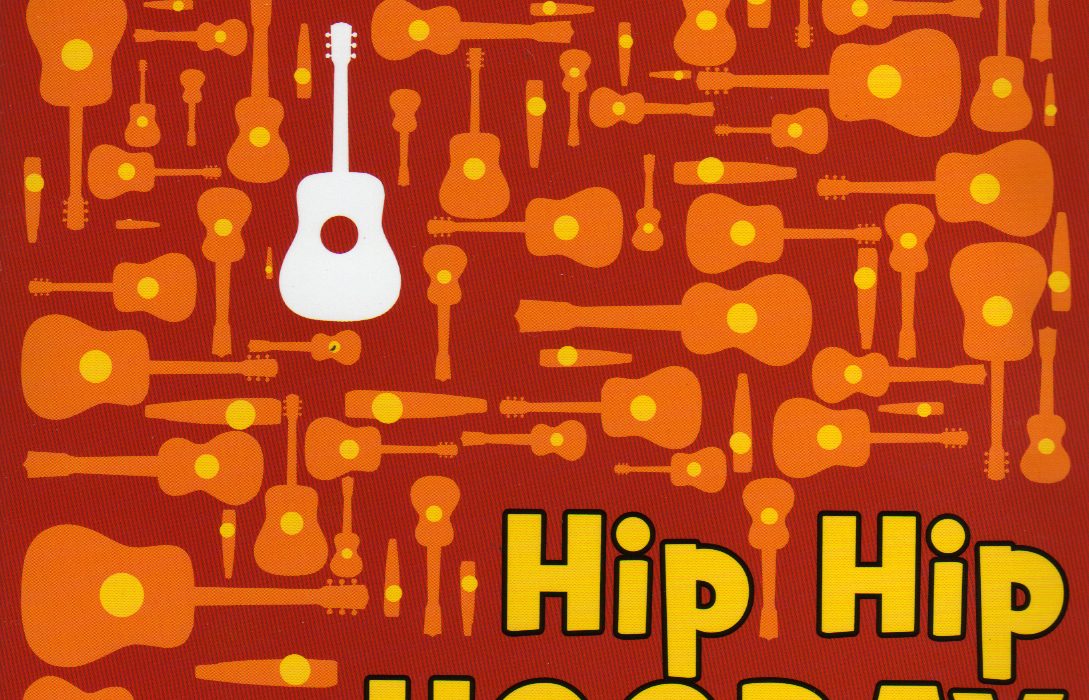 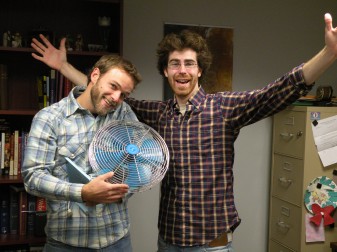 Kyle Heimann, left, a native of Decatur, who grew up at St. Mary of the Assumption Parish and attended St. Joseph School there, “clowns around” with Dan Harms, who now lives in Decatur. The two make up the acoustic-rock and Catholic ministry team of Popple. Their fifth album, “Hip Hip Hooray” has recently been released.

FORT WAYNE — Kyle Heimann of Fort Wayne and Dan Harms of Decatur aren’t the typical acoustic rock group that you may hear at a coffee house or even a bar — although they easily look the part. But the duo, known as Popple, and active in youth and young adult ministry events throughout the Diocese of Fort Wayne-South Bend, prove that one can take a Catholic message to middle school, high school and even the college crowd, in music and words and still be hip — thus the name of their fifth album release, “Hip Hip Hooray.” 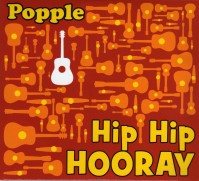 The big release event for Hip Hip Hooray will take place at the National Catholic Youth Conference in Kansas City, Nov. 19-22, with an expected 23,000 youths. But locally, the album is available at the Cathedral Bookstore in the Archbishop Noll Catholic Center.

The 15 tunes, all written by Heimann or Harms, begins with a rap song with a bridge that has Christian themes. The songs deal with quotes from Mother Teresa, vocations, a call to social action, songs that celebrate God who created bananas and dogs, a song based on Matthew 5, a tune inspired by “The Giving Tree,” and even songs about moral relativism, the Transfiguration, the pope and disco music.

Harms said each song on the album has some functional point to it that can be used in their ministry.

“Writing these songs and having these projects that come up really gives me an great opportunity to sit and spend some time in prayer reflecting on how my faith life is changing,” Harms said.

He said over the years he has found a strong connection to the Apostle Peter, “and this album has sort of given me the opportunity to write about that and bring that to our ministry in a way that kind of is fun and allows me to keep exploring that relationship.”

Some of the songs were taken from their other albums, but still relate or tie into their ministry.

Heimann described Popple’s “sound” as acoustic humor rock, “but really, I would say, especially on this CD, ‘Hip Hip Hooray,’ we really jump genres a lot. We have some hip hop stuff, we have a disco song. There’s one that has a Jewish influence.”

Popple calls the album a mix of “goofy, fun songs, but some prayerful and introspective songs that bring a slightly different side to the album,” Harms said.

Heimann and Harms met at campus ministry at Purdue University. Heimann was a youth minister at St. Thomas Aquinas Parish, and Harms, who was a Purdue student, was a volunteer with the youth ministry.

Harms, who is from a military family and lived throughout the world, played guitar for retreats and youth nights. Heimann started playing guitar too. “Things kind of snowballed from there,” Heimann noted, “But it all started doing youth ministry together.”

They played retreats, but also wrote “some goofy stuff” that they would perform at coffee shops. “So we would do these sort of fun concerts and these ministry events,” Heimann said. “The more we started doing them, the more these lines started to blur. We would do ministry (materials) at coffee houses and we would do ‘goofy things’ at the retreats. So it kind of blended.”

Today, Popple plays about 130 days per year and includes parish or diocesan events across the country. They recently played at the diocesan confirmation rally at Manchester College in North Manchester.

“Some places put us up in hotels,” Heimann noted, “but we’re happy to stay with host families. Sometimes they put us up in the rectory or retreat center.”

Popple ministers more to the high school youth groups because they are most organized at parish and diocesan levels. “But I think our music is pretty versatile, as far as age groups,” Heimann said.

“Some of the best events we’ve ever done have been when the whole family is invited,” Harms said.

The greatest ministry Popple provides is “not necessarily the depth of our music,” Harms said, “but just the relational ministry we have with people. You have a high school kid who has been around the faith but has never been deeply engaged in the faith. They look at us who are two young guys who are goofy and very involved in a normal social life and pop culture, but who also have a really serious faith commitment. And our faith life is really an important part of who we are. I think that example, and being able to talk to kids about that really resonates. I think that’s where a lot of the value of our ministry is derived from.”