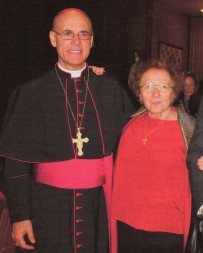 The following is the talk given by Bishop Rhoades at the Annual Day of Remembrance of the Holocaust, the Yom Hashoah Service, at Congregation Achduth Vesholom, Fort Wayne, on April 28th. The event is sponsored by the Jewish Federation of Fort Wayne.

It is an honor for me to be with you here this evening as we remember with great sorrow the Holocaust and as we honor with deep gratitude Danuta Renk-Mikulska. Shalom! Peace be to you and all the members of the Jewish community in Fort Wayne. I greet you with fraternal love.

I must begin by mentioning the canonization yesterday of two holy popes, great friends of the Jewish people who did so much to build strong Catholic-Jewish relations.

Saint John XXIII, then Archbishop Roncalli, was apostolic nuncio in Turkey during the time of the Holocaust. He ran a network to issue forged visas and immigration and baptismal certificates that saved the lives of large numbers of Bulgarian, Hungarian, and other Jews. And, as Pope, John XXIII called the Second Vatican Council that ushered in amazing progress in Catholic-Jewish relations and condemned in no uncertain terms all forms of anti-Semitism.

We all know Saint John Paul II’s affection for the Jewish people since the time he was a young boy. He always saw the bond between Jews and Catholics as sacred. He lived under Nazism in Poland and experienced personally the evil of anti-Semitism. In countries all over the world, he called on people to remember the Holocaust and, in particular, the people whose sons and daughters were intended for total extermination. We are doing so at this service this evening.

I’ll never forget, when I was a graduate student in Rome, Pope John Paul II’s visit to the synagogue of Rome. Again he expressed his abhorrence for the genocide against the Jewish people during World War II, which led to the holocaust of millions of innocent victims. Saint John Paul II taught all Catholics to look upon our Jewish brothers and sisters with esteem, affection, and appreciation as he always focused on our common spiritual heritage. How beautiful it was yesterday that many Jewish representatives attended the canonization Mass. A Jewish human rights group called John XXIII and John Paul II “heroes to the Jewish people.”

This evening we honor another hero, someone who exemplifies the spirit of our new saints: Danuta Renk-Mikulska. She comes from the same land as our beloved John Paul II: Poland, a country devastated by the Nazi occupation. Years before the Second Vatican Council, Danuta and her family demonstrated a true concern and affection for their Jewish neighbors and risked their lives to assist them. I think of Danuta’s courage at such a young age, bringing food to these Jewish neighbors in hiding. As you know, Danuta was recognized by Yad Vashem last year as a “Righteous Among the Nations.” How fitting it is that we honor her this evening.

The horror and evil of the Holocaust can overwhelm the human spirit. People like Danuta, John XXIII, and John Paul II teach us that evil does not have the last word. They teach us, as Saint Paul said, “to overcome evil with good.” On behalf of everyone here this evening, I say to Danuta “thank you.” Thank you for your courage and love. And I thank God for your courageous parents and family. May God bless you and may God bless our friends, the Jewish community of Fort Wayne!