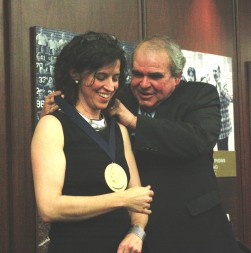 NOTRE DAME — Pro-life champion Helen Alvaré was honored on April 25 as winner of the 2012 Notre Dame Evangelium Vitae Medal. Inaugurated in 2011, the medal is given annually by the University of Notre Dame Fund to Protect Human Life to an individual who “steadfastly” affirms and defends the sanctity of human life.

Alvaré worked for three years in the Office of the General Counsel of the United States Conference of Catholic Bishops (USCCB) and then became a spokesperson for the USCCB Secretariat for Pro-Life Activities for the next 10 years. She then joined the faculty of the Columbus School of Law at The Catholic University of America, and now is on the faculty of School of Law at George Mason University. Her scholarly work is in the areas of abortion’s impact on women; marriage; parenting; and new reproductive technologies. Alvaré is also a consulter to the Pontifical Academy for the Laity.

The medal citation praised Alvaré for over 20 years of service defending and promoting human life. With quotes from Blessed John Paul II’s 1995 encyclical “Evangelium Vitae” (“The Gospel of Life”), for which the medal was named, the citation stated: “In an age when the sanctity of life from its earliest to its final days is assaulted, you have boldly and unremittingly worked to build and sustain the ‘unconditional respect for the right to life of every innocent person,’ ‘one of the pillars on which every civil society stands.’”

The citation cited Alvaré’s work: “From the television studio, to the radio airwaves, Congressional hearing rooms, university campuses, and forums beyond, you have spoken and acted with ‘courage on behalf of those who have no voice.’”

1) Pro-life is not a cause or an issue, but a way of life, God’s way of trying to transform the activists personally as they do good for the world; 2) That the Catholic Church is the best at pursuing the truth about the human person and thus does pro-life better than anyone; and 3) The pro-life movement has won the argument about the humanity of the unborn child, though formidable challenges remain because of the culture’s distorted view of human sexuality — challenges that Alvaré went into academia to address.

In his homily at the Mass preceding the award banquet and ceremony, Bishop Kevin C. Rhoades noted that the Gospel for that day is a reminder that the Church is an “evangelizing community” with the obligation to spread the Gospel, for God wants all people to know the truth and be saved. However, evangelization faces many challenges in today’s increasingly secularized culture, where relativism is rampant, religious liberty has come under assault, and the sacredness of human life has been discarded, he said.

Bishop Rhoades quoted the first words of “Evangelium Vitae”: “The Gospel of life is at the heart of Jesus’ message. Lovingly received day after day by the Church, it is to be preached with dauntless fidelity as ‘good news’ to the people of every age and culture.”

Therefore, the bishop explained: “The New Evangelization requires ‘dauntless fidelity,’ courage, creativity, zeal and commitment” to “defend human life against the many threats from the culture of death in which we live.” And he described Helen Alvaré as a wonderful example of the role of the laity in “wisely and courageously” proclaiming and serving that “Gospel of life.”

In his introduction of Alvaré, David Solomon, chairman of the Notre Dame Fund to Protect Human Life, explained that the fund had been created by several Notre Dame faculty and staff members to support pro-life initiatives on the campus and to put in place a comprehensive pro-life educational effort at Notre Dame. Bill and Peggy Dotterweich and other generous donors make the fund possible, Solomon said.