Coming Jan. 27 to the Diocese of Fort Wayne-South Bend is a gift: the opportunity to be prayerfully present with a relic of St. John Vianney. The incorrupt heart of St. John Vianney will be at the Basilica of the Sacred Heart, Notre Dame, during the 10 a.m. and 11:45 a.m. Masses, and available for personal devotion either in the basilica or in the basilica crypt, from 1:30 p.m. until 7 p.m. A solemn vespers service in the presence of the heart will begin at 7:15 p.m.

After months of scandal and uncertainty in the Church, this opportunity for prayer and veneration with a relic of St. John Vianney comes at a most appropriate time. He is the patron saint of priests; one might not imagine a better intercessor during such a time of turmoil for the shepherds of the flock. This side of heaven, St. John Vianney knew well the trials and temptations of the priesthood.

St. John Vianney was a friend and support to the laity as well. He willingly and lovingly spent hours upon hours in the confessional, offering the sacrament of reconciliation. His attention and care for souls was unparalleled. 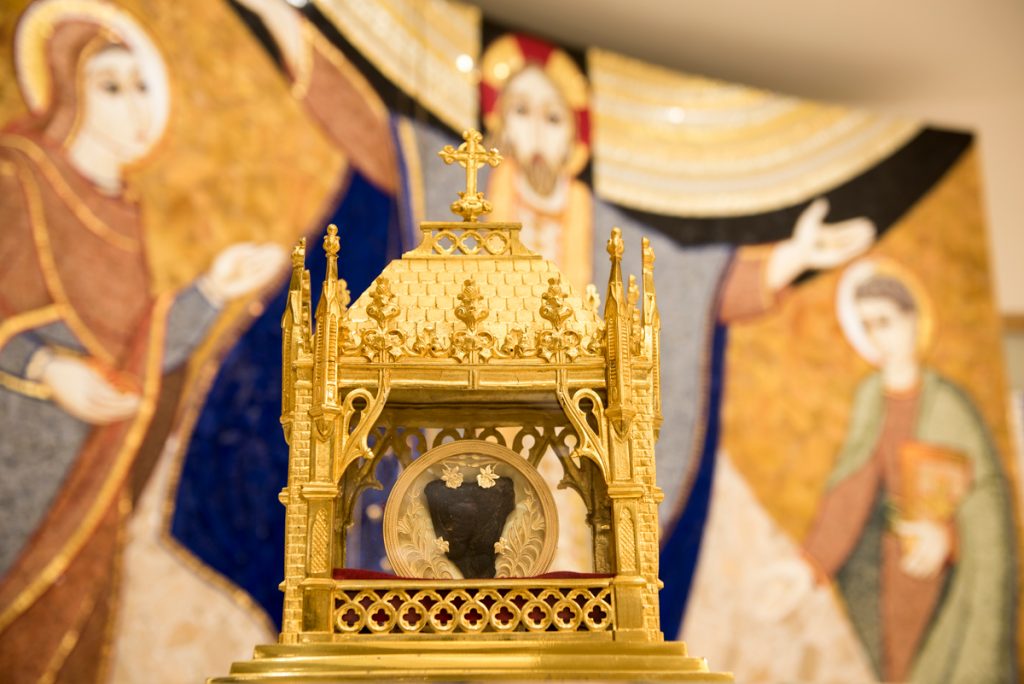 The incorrupt heart of St. John Vianney will be present at the Basilica of the Sacred Heart, Notre Dame, on Sunday, Jan. 27, as part of a nationwide tour and opportunity for veneration. — Provided by Knights of Columbus

The story of his life resonates with seminarians as well: He lived through a most difficult time in France during and after the French Revolution, when it was illegal to receive Communion, let alone study for ordination. St. John Vianney also struggled in the seminary, especially with Latin, which was mandatory for priests to master at that time. He almost was expelled as a result, but divine grace, through the intercession of other holy priests, prevailed. For anyone struggling to live a life of holiness, for those who doubt God and His grace or aren’t sure about the Church and the gift of the sacraments, essentially for us all — St. John Vianney is a holy intercessor in heaven, with a spirit willing to intercede for souls on earth.

First class – A physical part of a saint, such as a piece of bone or a lock of hair. The heart of St. John Vianney was taken from the saint’s body after his death in recognition of his burning love for God and humanity. St. John Vianney’s heart on earth was generous in priestly responsibilities, focused on the truths of God, and humble in his constant service for souls. It has remained intact, or incorrupt, for more than 150 years.

Second class – An object routinely used or touched by the saint during life, such as a piece of clothing, a book or a pen.

Third class – An object that is reverently touched to a first-class relic. 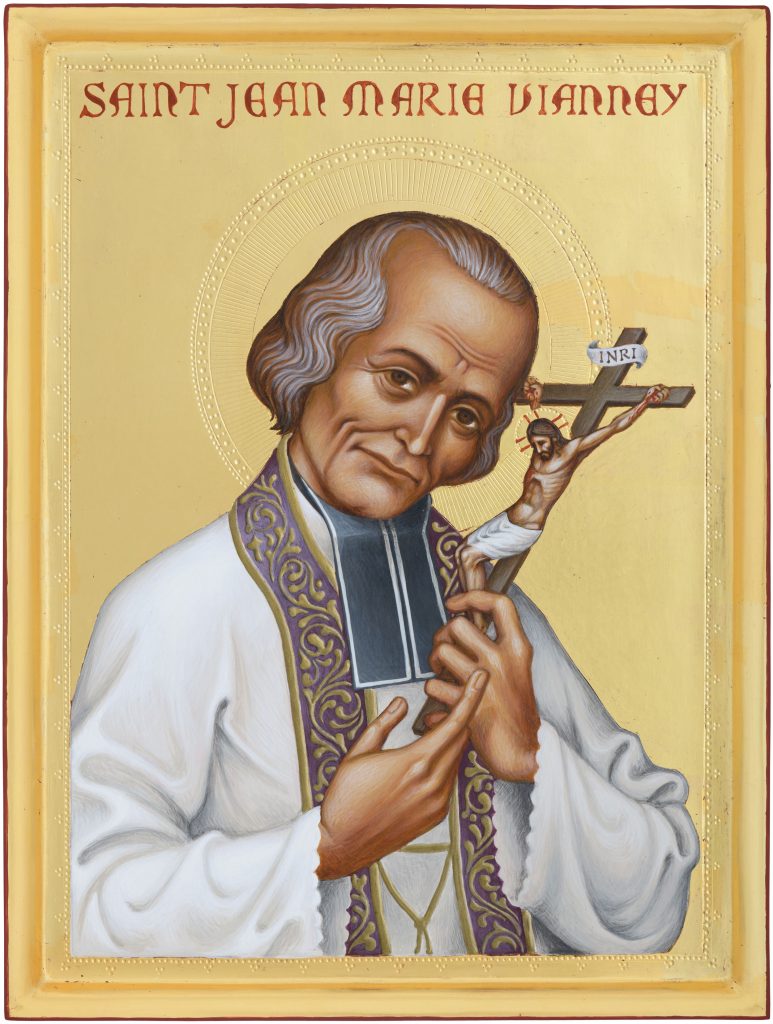 The life of St. John Vianney, the patron saint of priests, is also an example for Christians who strive for holiness in the daily decisions that they make.

St. John Vianney’s nickname is the Cure of Ars, French for “the priest of Ars,” the town of his longest assignment. In 1818, Ars was a small country town, not unlike many in Indiana. People were busy with their daily lives and recovering from the tumultuous civil war. The Church in France had been severely shaken by the massacre of religious and priests, many by way of a new invention called the guillotine; and there was a wholesale bandwagon of philosophic ideas that rejected God in favor of atheistic secularism. The loose morals of the townspeople did not favor a new priest, but St. John Vianney went where he was needed, not wanted. He stayed, however, until his death, wherever he became wanted and beloved.

St. John Vianney desired holiness for his parishioners and grew in relationship with them, getting to know them and their spiritual struggles. In doing so, he was able to speak with them about God and the sacraments, asking when was the last time they had been to confession, if their children were baptized and if they were making holy choices on Saturday night. He confronted pastoral issues with truth and charity, not avoiding topics that were difficult to address. St. John Vianney was not an eloquent preacher, but his words were simple and direct. He spoke the words that needed to be said and what people’s souls needed to hear.

Soon people were packing the church and coming from neighboring towns. By 1830, Ars had completely turned around and was reportedly one of the most Christian villages in all of France.

The transformation of his flock came also at the personal prayer, fasting and piety of St. John Vianney himself. He would spend half the day, 11 to 12 hours, in direct pastoral care of his parishioners. He would eat and live simply, with a basic meal of a potatoes and no meat, giving his money to the poor or for the church building itself. He once bought luxurious altar cloths with lace and embroidery, while living himself in ragged shoes. He believed in the real presence of the Eucharist and wanted to visually honor Jesus at Mass. 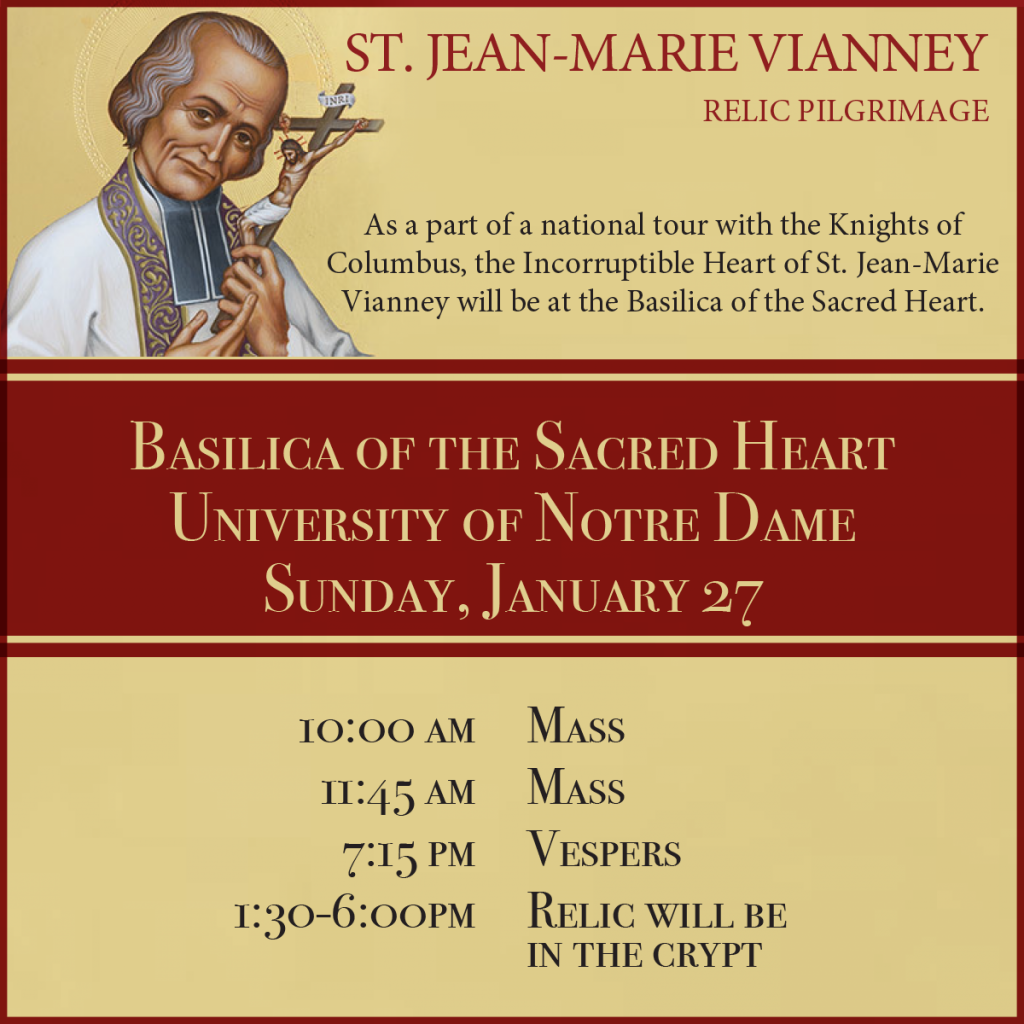 All are welcome to venerate the relic of St. John Vianney during Mass, or during the vespers service. The reliquary containing the heart will be moved to the crypt for personal veneration following the 11:45 a.m. Mass and until the vespers service: the crypt can be accessed by either of the stairways located near the two back doors of the basilica, located on the north side.