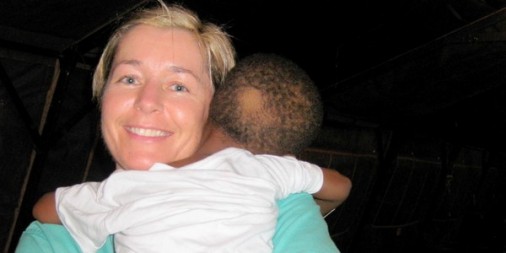 Ann-Marie Thomas holds the baby who was transported by helicopter into the hospital. At press time, Today’s Catholic learned that the child was reunited with his biological mother after his photo was featured in the Wall Street Journal.

SOUTH BEND — Three months after a 7.0 earthquake decimated much of the already-impoverished country of Haiti, the thousands of people left injured and without homes are still very much in need of help. Ann-Marie Thomas, a South Bend nurse who returned from serving in Haiti last month, believes the health problems are only beginning.
“They’ve only now just started getting into when the disease sets in,” says Ann-Marie, who worked with a group of 17 medical volunteers from South Bend. “They’re thinking typhoid, cholera, tuberculosis are all going to come. There isn’t a chance these things won’t come, because they will. How many more will that affect?”

Over 200,000 people were killed in the Jan. 12 quake, including the Archbishop of Port-au-Prince. The capital city was leveled, families were ripped apart, millions left homeless and thousands were injured. Many had limbs amputated without the benefit of anesthesia, and according to Ann-Marie, infection is a major concern. One of her jobs was to teach patients to care for their wounds as they recover, not knowing when the next doctor might be available. Some patients have pins holding bones together, and those pins will need to remain in place for another two-to-three months.

“You have to keep that clean,” explains Ann-Marie. “I had peroxide wipes in little baggies that I was giving out. You just hope the next person will continue the care. They are totally at the mercy of whoever comes next.”

Ann-Marie spent five days serving in the village of Milot, about 75 miles north of Port-au-Prince. The Hopital Sacre Coeur is the only hospital left standing, and the 70-bed facility was flooded with over 400 patients. Ann-Marie spent much of her time dressing wounds and tending to the emotional as well as the physical needs of the people.

“Some of them were obviously more emotional than others, because as soon as you’d walk in the screams would start because they knew you’d be taking off the dressing,” recalls Ann-Marie. “Some of the dressings weren’t bad, but some of them were terrible. And the little ones, they were just losing it because whenever we came towards them they thought they were going to get another limb removed. If they were being brought up to the (operating room), they thought another limb was getting cut off.”

Ann-Marie says she holds a special place in her heart for the Haitian people, especially after seeing how even total strangers looked out for one another. She recounts the night a little boy was brought in by helicopter. She compared it to the old days of (the television show) “M*A*S*H.”

“We reckoned he was about 18-months,” Ann-Marie describes the baby. “They’re all very malnourished so he’s probably two-and-a half … no name, no chart, no age. And he’d had his leg amputated. How do you deal with that? They ended up laying him on a mattress in the children’s ward, next to a lady who was there with her daughter. ‘Will you keep an eye on him? Because he’s got no one. We don’t know who he is.’ And she goes, ‘Okay.’ And the next day when we went over and he wouldn’t come to us … she had named him Jean-Pierre … and she said, ‘I’ll take care of him.’ Another mouth to feed, and he’s missing a limb.”

Other times, Ann-Marie says a patient in one of the hospital tents would cry out in pain. As she scrambled to find an interpreter to reassure the patient, she says someone from the next cot would reach over to hold the patient’s hand.
“I tried to focus on the fact that people there do have each other,” says Ann-Marie. “Every patient has a little pocket Bible by his bed. One morning we came in to the tents, I could hear this music … this singing. It was this group of paraplegics, and a few other patients, singing hymns on a Sunday morning in the tent. It was one of the most moving things I’ve ever heard. It’s just gripping, just lump-in-your-throat breathtaking.”

Ann-Marie says the work in Haiti was exhausting and leaving was difficult. But she plans to go back.