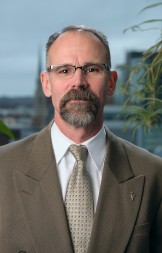 By Jill A. Boughton

Some time ago, Harry Verhiley told a coworker he felt that Sept. 14, the Feast of the Exaltation of the Cross, would be a special day for him. He didn’t know why.

That turned out to be his first day as senior vice president of institutional advancement for Marian University in Indianapolis, where he now oversees strategic and operational planning and serves on the president’s cabinet.

Verhiley hit the ground running: Marian has packed his first two weeks on the job with challenges and opportunities.

After nearly 17 years as director of the Secretariat for Stewardship and Development of the Diocese of Fort Wayne-South Bend, saying goodbye was difficult for him.

“I will really miss all the friends I made working for this diocese,” he admitted. “And I’m counting on their prayers.”

Harry and Joanne Verhileys’ five adult children and five-going-on-six grandchildren live in Indianapolis; four graduated from Marian University and the fifth married a graduate. Additionally, their two youngest children are students at St. Joseph High School, South Bend, and Joanne loves her job as receptionist at their parish school, St. Pius X in Granger. Although Harry has begun his new job, the family will take their time “working the logistics” of a move,” he said. “God’s got a plan, and it will work.”

Harry’s son, Patrick Verhiley, works as an admissions counselor in Marian University’s San Damiano program, which recruits, forms and financially assists students who envision careers in service to the Church. He’s the one who told his father about Marian’s search for a new senior vice president of institutional advancement. “You would be perfect for the job,” he told Harry. That was in early August, and the leading of the Holy Spirit was very strong.

Harry served in the U.S. Marine Corps and holds graduate degrees in theology, administration and organizational management. In his previous job for the Archdiocese of Indianapolis, before coming on board with the Diocese of Fort Wayne-South Bend, he worked with Marian President Daniel Elsener. He’s currently excited about Marian’s aggressive, nine-year strategic plan for exponential growth.

“My education, my experiences, my opportunities lead me to believe this is where I should be, where I can have an impact,” he said.

“It has been a great honor working with both Bishop D’Arcy and Bishop Rhoades. I was very comfortable serving the Bishop in this role. But sometimes God pushes you to be uncomfortable,” he explained. As he became convinced that God was calling him to this new opportunity, he went to seek Bishop Rhoades’ blessing. “Of course,” he recalled Bishop responding. “That makes a lot of sense. You should do what God is calling you to do.”

Msgr. Robert Schulte, vicar general and chancellor of the Diocese of Fort Wayne-South Bend, referred to Harry as “a man of great faith” who not only led his large family to World Youth Days but brought youthful energy to his stewardship role. Besides all his work on the Bishop’s Appeal, grant-writing and advising parishes on their own capital improvement drives, Harry spearheaded establishment of the diocesan endowment program Legacy of Faith.

Julie Kenney, director of development operations and interim director of the Secretariat for Stewardship and Development, met Harry while she was previously employed at Our Sunday Visitor. “I learned so much from Harry. His outlook on development has formed my vision.”

She sees his optimism as the fruit of his Christ-focused faith. “He would tell me, ‘No worries. This must be the work of the Holy Spirit.’” Kenney also found Harry’s perspective on stewardship refreshing. He excelled at enabling parishes to succeed in their own efforts, she noted, instead of expecting the diocese to take the lead.

Harry is more modest in evaluating his own contribution to the Fort Wayne-South Bend diocese.

“I can’t take pride in the growth of the Annual Bishop’s Appeal or the Legacy of Faith. I’ve given it my best effort. That’s all anyone can ask.”