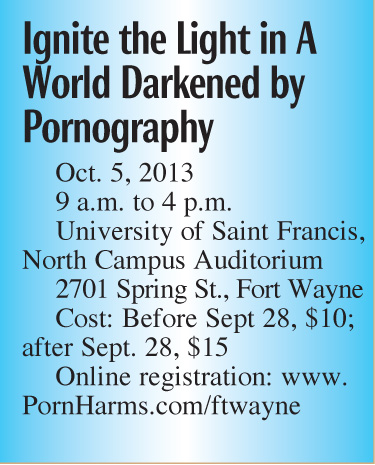 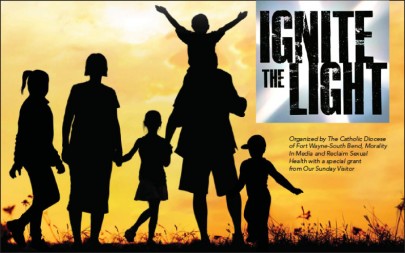 FORT WAYNE — “Nearly every priest will say that pornography is the most frequent sin mentioned in Confession. Pornography is a destroyer of spiritual lives. It is also a destroyer of marriages and families,” said attorney Patrick Trueman, the president of Morality in the Media (MIM) and former chief of the Child Exploitation and Obscenity Section, Criminal Division of the U.S. Department of Justice from 1988 to 1993.

Trueman, Bishop Kevin C. Rhoades and nationally recognized experts from Reclaim Sexual Health — will be speakers at the Ignite the Light in a World Darkened by Pornography conference to be held at the North Campus of the University of Saint Francis on Saturday, Oct. 5. The conference is open to adults and teens aged 14 and older. 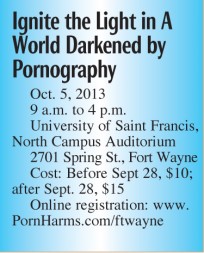 In an email interview, Trueman told Today’s Catholic, “One survey from a few years ago indicated that pornography is a factor in more than half the divorces in this country. The reason why pornography is so destructive is found in its addictive nature. Many men and women, and even children are addicted to pornography, and like any addiction, the substance addicted to becomes the driving force in the one addicted. Thus, family life and work life become secondary to the driving desire for pornography. Those addicted act out and thus, extra marital affairs, prostitution and sexual abuse follow.”

“Also, this conference will be beneficial to young adults looking to avoid pornography before it leads to life-long problems, such as addiction,” he encouraged. “Young couples are affected by the harms of pornography more so now than ever before and marriages are suffering as a result.”

“Attendees will get a roadmap to recovery for themselves and others with the provision of teachings on specifically how pornography affects the brain,” Trueman said.

“The overall goal of the conference is to leave attendees feeling hopeful and optimistic about what they can do in their homes and community to protect against the harms from pornography,” he said.

The Diocese of Fort Wayne-South Bend is collaborating with Morality in Media, a nonprofit committed to fighting pornograpny through public education and the application of the law, and the national Catholic apostolate, Reclaim Sexual Health to host the Oct. 5 conference. Our Sunday Visitor in Huntington has provided a grant for the conference.