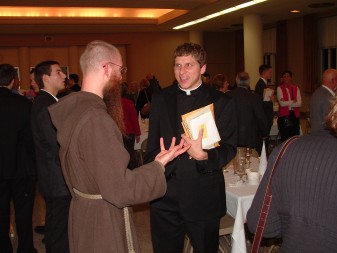 Seminarians and other religious enjoy conversation at the annual Serra Club dinner.

FORT WAYNE — “I am of the unambiguous opinion that each and every Catholic man needs to explicitly open his heart to the possibility of a priestly vocation,” says Deacon Christopher Lapp, who will be ordained to the Priesthood on June 1 this year.

Deacon Lapp, corresponding via email with Today’s Catholic from Pontifical College Josephinum in Columbus, Ohio, says, “I have confidence that God is calling many more men to answer this call, so much does He love us and desire for us to have the Eucharist and other sacraments. We can and should pray that these men are courageous in the face of any number of oppositions that present themselves, especially the culture, friends, personal expectations and even at times, family.”

Msgr. Bernard Galic, the director of Vocations for the Diocese of Fort Wayne-South Bend, could not be more pleased with the 27 seminarians studying in Rome, Mount Saint Mary’s Seminary in Emmitsburg, Md., Pontifical College Josephinum and Immaculate Heart of Mary Seminary in Winona, Minn.

And Msgr. Galic notes that another four men have sent in papers to be placed into the process and another four or five men wish to speak with him at the beginning of this new year.

“God is blessing us with vocational interest,” Msgr. Galic says.

The interest in studies for the priesthood is up across the country reports Msgr. Galic, who also serves as pastor of St. Aloysius Parish in Yoder. Pontifical College Josephinum may be filled near capacity next fall.

“There are definitely more young men coming forward to enter seminary and discern their possible call to the priesthood, and I attribute this to a greater awareness to the Lord in their lives,” says seminarian Zachary Barry, a parishioner from Our Lady of Good Hope, Fort Wayne, who will be ordained to the diaconate this May. “This kind of increase in vocations comes from better catechesis, prayer as Jesus recommends in Matthew 9:38, fostering vocational discernment among Catholic youth, and from the witness of holy, faithful, joyful priests.”

He adds, “As seminarians, we recognize the need for greater evangelization and discipleship, which will draw us closer to the heart of Jesus Christ, the source of all true vocations.”

Deacon Lapp, who grew up in and is a parishioner of St. Vincent de Paul Parish, Fort Wayne, credits Bishop Dwenger’s strong theology department as an influence. “I became truly interested in learning theology in high school and the theology classes kept me on my toes,” he says.

Barry, who grew up in St. Charles Borromeo Parish, Fort Wayne, adds that, “during high school my participation in Bishop Dwenger’s ‘A Chance To Serve’ ministry and in my parish youth group led me deeper in prayer and discernment.”

“My family helped me to grow up to be free to embrace whatever the Lord invited me to; and I received tremendous support when I entered seminary. This support has been a sturdy shelter throughout the ups and downs of the last several years,” says Deacon Lapp.

“My mom suggested that we could ride our bikes to Mass during the week in the summer, which drew me closer to Christ’s intimate sacrifice,” Barry adds about his family’s influence.

And parish life was important to both seminarians. Barry’s middle school religion teacher encouraged him to read the Bible every day.

“The priests at St. Vincent’s especially helped me consider a vocation to the priesthood — especially Msgr. Kuzmich, who has been my only pastor and a wonderful priestly example,” adds Deacon Lapp.

And the people in the pew have a responsibility too.

“Pray,” notes Deacon Lapp, “especially for more men to open their hearts to the possibility of a priestly vocation and for the courage to embrace it. Also, affirm young men in their striving to live lives of virtue.”

He adds, “And don’t be afraid to directly ask him to consider a vocation to the priesthood. Many here in the seminary will admit that those encounters stuck with them and, like a gnat, got them to take the Lord’s actual invitation seriously.”

Seminarian Barry says, “Pray. Pray for vocations, that the Lord will find a way into the hearts of our young people today, and that they will respond courageously to Christ’s call to witness to the faith out of love in whatever way He calls them to do so.”