Beards are quite popular these days, and some young men will use any excuse to grow one, especially if it means breaking the dress code at a Catholic high school. Michael Schroeder was looking for such an excuse when he approached Harry Verhiley, theology teacher at Saint Joseph High School in South Bend, requesting an additional “no-shave” time beyond the yearly “no-shave December” that takes place every year at the school. The compromise Verhiley came up with, however, went a little more than skin-deep, giving birth to the Nazarite Project.

The Nazarite Project is based on the vow taken by certain Israelites who consecrated themselves to God in the Old Testament. This vow is found in Chapter 6 of the book of Numbers. Nazarites pledged to remain pure before God, abstain from strong drink and to let “no razor come upon the head.” (Nu 6:5) The most well-known Nazarite is the biblical Samson, who used his immense, God-given strength to fight against the enemies of Israel. 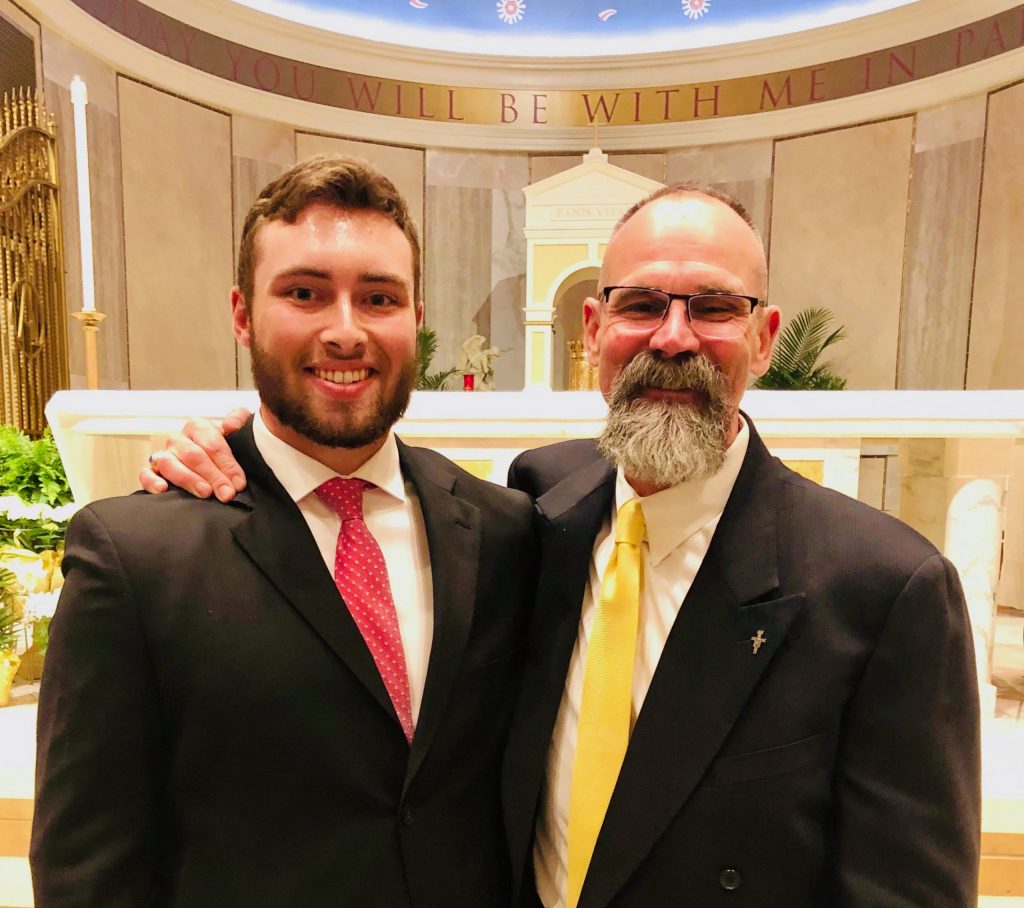 Provided by Harry Verhiley
Michael Schroeder stands with sponsor Harry Verhiley at his acceptance into full communion with the Catholic Church at St. Pius X Parish in Granger in 2019. Schroeder sports the beard he was allowed to grow during the Nazarite Project that Verhiley developed at Saint Joseph High School in South Bend.

The objective of the Nazarite Project is to attain a different kind of strength during Lent – spiritual strength. “The point is to draw close to God by intensifying our prayer and attending Mass,” Verhiley stated. Of greater importance than growing a beard is the students’ pledge to attend Mass every Tuesday and Thursday throughout Lent.

“It all started when Michael Schroeder, a senior at Saint Joseph last year, came up to me and asked if we could do another ‘no shave December,’” Verhiley recalled. After thinking over Schroeder’s question, Verhiley presented him with the concept of the Nazarite Project the next day. Schroeder was not Catholic at the time, but had been considering the Catholic Church, so when Verhiley dangled the option of growing a beard in conjunction with weekly Mass, Schroeder jumped aboard. Weeks later, he asked Verhiley to sponsor him in the RCIA program at St. Pius X Parish in Granger to enter into the Catholic faith. Schroeder was welcomed into the Church at Easter Vigil.

“When Mr. Verhiley brought up the idea of going to Mass before school every Tuesday and Thursday during Lent, I considered it a blessing for a couple of reasons,” Schroeder said. “First, it allowed me to break the dress code and grow my beard during Lent. But more importantly, at the time I was preparing for conversion into the Catholic Church and it gave me the opportunity to pray.”

While the 40-day journey brought Schroeder closer to God, it also brought him closer to his teacher and sponsor. In addition, he witnessed the influence the Nazarite Project had on other students. “I thought the biggest outcome of the Nazarite Project was how many people joined us for Mass early in the morning, twice a week; we had an amazing turnout. There were some students who were friends of mine, I would have never expected to join us, but they did.” Schroeder graduated from Saint Joseph last year and is now studying at Purdue University.

This is the second year for the Nazarite Project and interest still remains strong among Saint Joseph students. Last year, around 40 students participated; this year there are roughly 25 involved. And young ladies are invited to take up the challenge as well as young men. “I tell (the girls) they don’t have to shave, either,” Verhiley joked.

With e-learning currently mandated, Verhiley hopes the participants are continuing with the pledge on their own. Two students currently participating in the Nazarite Project are brothers Sean and Ryan Larkins, a senior and junior at Saint Joseph. Both young men have seen their spiritual lives grow and increase throughout Lent. Sean said, “Taking some time out of my morning in order to meditate and pray with the Lord before my e-learning assignments allows me to clear my mind and focus on the tasks for the day. During this sabbatical, it is more important now for me to spend time in peaceful silence to calm my mind and heart.”

Praying on a daily basis has become an important priority for Ryan. “I encourage everybody to try and pray every day. It will help you have a positive outlook on other people and difficult situations in life.”

With the end of Lent around the corner, Verhiley anticipates seeing the fruits of spiritual growth the students have gained. “I’m sure every guy who can is growing a beard; I hope they are praying and attending Mass online, too.”