Even for a family rooted in their Catholic faith, a health scare can elevate the ability to trust in the Lord — and show just how powerful prayer can be.

Tom and Barb Gropp’s 13-year-old son Chris was diagnosed with a rare form of cancer this past summer. Now, thankfully — and in their words, miraculously — he is cancer-free.

In June, the Elkhart boy told his parents he was experiencing swelling under his jaw. The family doctor put him on antibiotics. After seven days, he broke out from head to toe in a rash, necessitating another trip to the doctor. He was diagnosed with a classic allergic reaction and put on steroids.

The family left for Florida on a two-week vacation. Chris wasn’t 100%, Mom said, but he was still able to play football on the beach and jump in the waves. The family arrived home July 9 and the next day, Barb went to work and Tom coached the All-Stars team Chris plays on.

Before the game, Chris was in tears. He couldn’t breathe, saying it “felt like he was breathing through a straw.” He sat down, and the breathing eased. 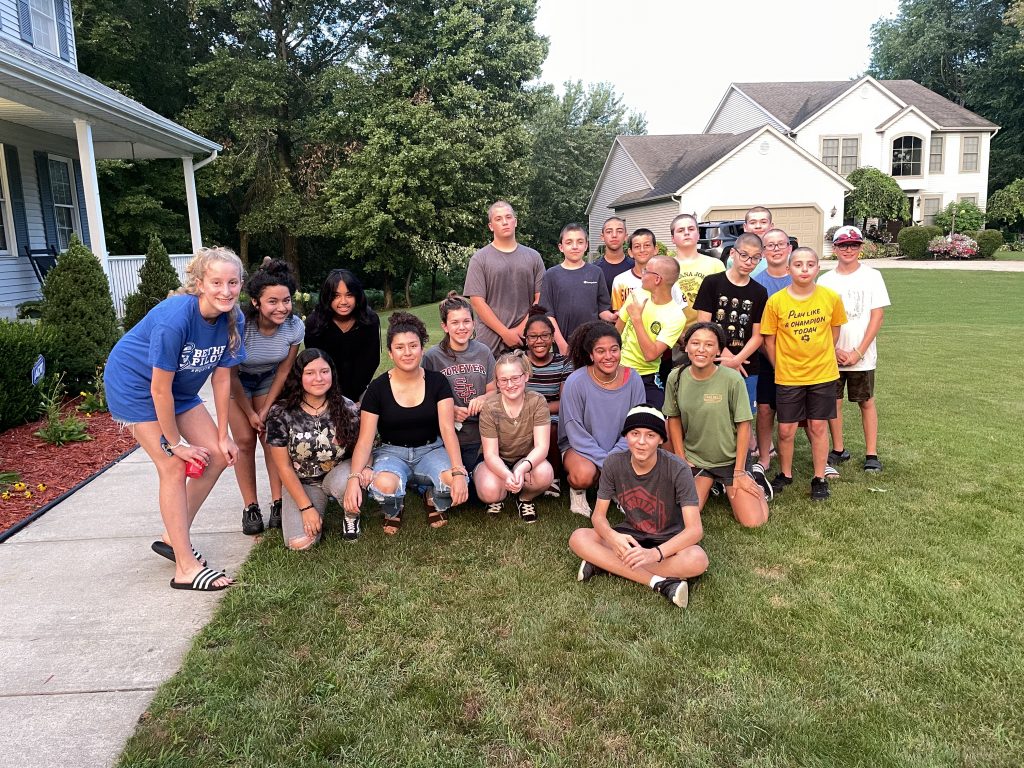 Provided by Beth Camp
St. Thomas the Apostle School eighth grader Chris Gropp, front, gathers with his classmates after he shaved their heads Aug. 29 to show support for him in his battle with cancer. A teacher and his pastor, Father Jason Freiburger, also asked Chris to shave their heads.

When the game was over, Chris was taken to an urgent care center, where an X-ray showed fluid on his lungs. Because the doctor thought it might possibly be a larger problem than antibiotics could handle, it was suggested he be taken to the emergency room at the hospital for more testing. “I’m so glad I decided to do that,” Tom said.

The doctor told Tom and Barb they had found a mass in the chest area. At that point, they didn’t know anything other than that it was “something out of the ordinary.” Arrangements were to send Chris to Riley Children’s Hospital in Indianapolis that night.

At Riley, the doctors quickly discarded lymphoma and leukemia. But initially, they still didn’t know what the mass was.

Chris is one of nine Gropp children. Older sister Josie was taking care of the others at home, and at that moment there wasn’t much food in the house. Barb called a group of friends and asked them to bring dinners. In a matter of 24 hours, the kids had dinners for two weeks. She also asked friends to put Chris on their prayer lists.

“The outpouring of love and support we received from the whole community — St. Thomas, Marian High School, St. Thomas Church and the Facebook community was amazing,” she said. “We were receiving prayers from all over the world.”

People began writing to her that they were thinking of Chris and praying hard. “I had people contacting me from other prayer groups in Michigan, Pennsylvania and Florida and I had messages telling me they were growing in their faith because of reading his story and that they had a new outlook on prayer, faith and trust by hearing his story,” Barb said. They also offered to make Chris scapulars and rosaries.

It was the middle of the second week at Riley before the family got a diagnosis of Peripheral T cell Lymphoma. They were told there were two kinds: Both were rare, but Peripheral T cell had a better success rate — 80%. It was also more aggressive, and they knew less about it.

According to the Lymphoma Research Foundation, PTCL is a subtype of nonHodgkin’s Lymphoma. The cancer arises in lymphoid tissues outside of the bone marrow, such as lymph nodes, spleen, gastrointestinal tract or skin.

Barb said when they put together a treatment plan, the doctor went hard on chemotherapy: three days in a row, all day. Chris has had to go back every three weeks to get another round. He has had three rounds to date.

It was determined the reason Chris felt like he was breathing through a straw was because there was a 10x10x4-centimeter mass laying on his left lung, which was 50% collapsed. He had to have a chest tube inserted for 2-½ weeks. During the first hour, the tube was inserted, it released two liters of fluid.

One of the darkest times, Barb said, were when the word “cancer” was used for the first time. People had been saying “mass” and “tumor,” but not “cancer,” until the oncologist came in and explained the process he would go through. The doctor explained the timeline of treatments might go into next year.

Chris was doing well as far as his spirits were concerned, Barb said, and he was responding to treatment but was getting discouraged about his release date from the hospital continually getting pushed back.

It was hard spiritually on him as well because he’d been denied the Eucharist a couple of times due to fasting and testing requirements.

At her request, a deacon from St. John the Evangelist Parish in Indianapolis came to bring Chris the Eucharist. Barb shared her concern that Chris hadn’t shown any emotion yet, and that he was trying to be strong. She asked the deacon to counsel him. He talked to Chris about suffering, and they were praying the doctor’s hands would be used as the Lord’s healing hands. She stepped out for a moment, and when she returned, “Chris finally let the floodgates down.”

The deacon told Barb, “He’s scared, but he realizes the Lord’s work in this and that he’s not doing this alone.” 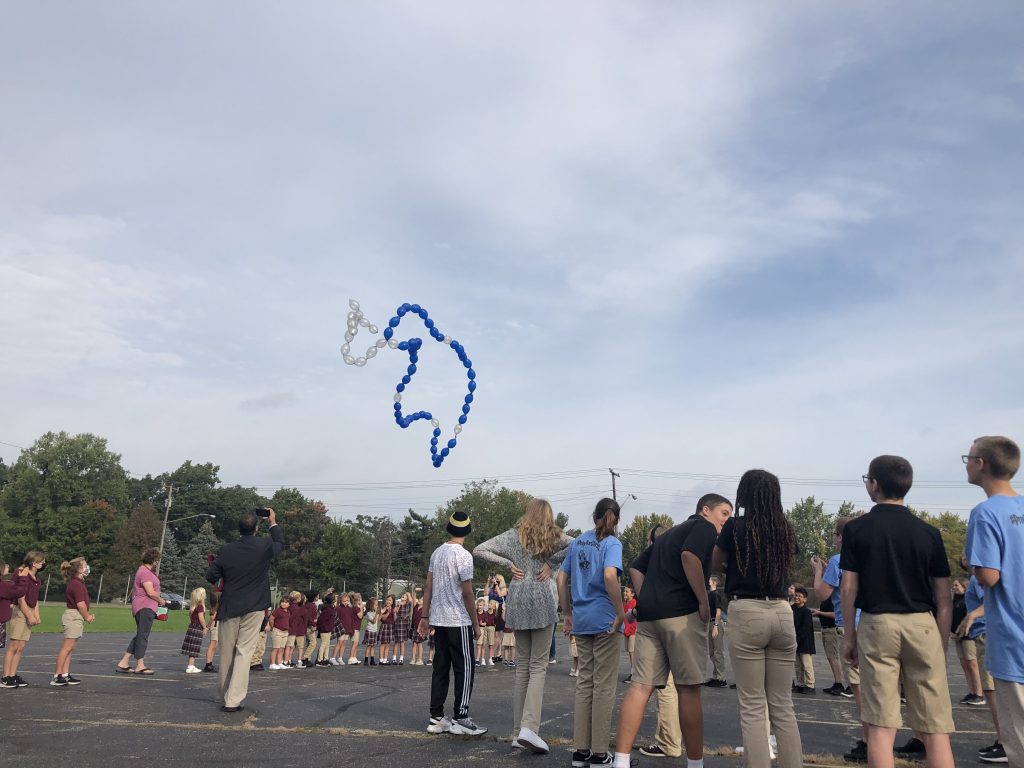 Denise Fedorow
A helium balloon rosary is released at the school Oct. 11 after the classmates of Chris Gropp, in hat, prayed a healing rosary for him before a bone marrow transplant to ensure his Peripheral T Cell Lymphoma doesn’t return.

The couple said they were never shown Chris’ first PET scan, but were told, “’With all the cancer in his body he should have been in agony.’ They couldn’t explain why he wasn’t in pain,” Barb said.

Tom and Chris went to Indianapolis for his second round of chemotherapy. They were in the hotel when they got a call from the doctor. She was going to take a picture of Chris’s second PET scan and give a copy to the team of doctors to put on their refrigerators, she told Tom. He didn’t understand why.

“She said the cancer was 98% gone. Her words were ‘miraculous results’: She said she’d never seen such results, especially after one round.” They were sent home for a week.

They continued with the other two rounds. The cancer is completely gone, but to make sure it doesn’t return, Chris underwent a bone marrow transplant in October.

“Since his illness began, he has amazed them by how his body has responded quickly. It’s been miraculous at every turn as far as I’m concerned,” Tom said.

Barb said through her son’s suffering, she has felt more connected to Mary in the Pieta.

“She watched her son suffer for the sake of others. I’ve watched my son suffer, not knowing the outcome. But I knew it wasn’t in vain because others were gaining from it.”

The ordeal gave her a new outlook on suffering. The message “surrender yourself” kept coming up — from others, in homilies, in readings and through prayer chains. She received messages from people sharing their experiences with different devotionals and incorporated all of it — brown scapulars, green scapulars, miraculous medals, oil of St. Joseph, oil of St. Raphael, holy oil from the holy land, rosaries. They prayed with medals she had pinned on Chris’ sheets at the hospital, and they prayed over the room.

Chris said the faith foundation he was raised with helped him through the ordeal. “From what I know as long as I was faithful and prayed then God would help me get through it. Whether it took a while or not — whether it was a few years or a few months, He’d still get me through it. It really gave me hope, knowing that.”

Tom drew from previous experiences that he’d been through “where God worked in my life in very obvious and direct ways. When you already have that faith point to draw from, you know it’s there and it’s real.”

That first week, there were dark times. Tom shared an experience that stood out in his memory, of a time he felt like he was in a dark pit and wondering what was going on. He was in the elevator at the hospital and one other man was in there, too. They didn’t speak a word, and the elevator stopped and the door opened.

“He looked at me and said, ‘God’s in control’ and walked out. It was what I needed to hear at that point.”

“I feel like I went through so much transition spiritually. I learned about suffering, surrender, trust. I feel like I had faith, but maybe I’d grown complacent,” Barb said. “There’s definitely room for growth in having more love for the Eucharist — it’s still a journey.”

For Tom, it rejuvenated and refocused them on “what’s truly important. Believe in the power of prayer and trust, he emphasized.” As hard as it may be sometimes, trust and let go. Looking at how amazed the doctors were and they were saying ‘We can’t explain it’. Well, I can.”