More than 45 years ago when abortion was made legal in the U.S., a local woman saw the need to support pregnant women and help protect the lives of unborn babies in her small corner of the world. The year after that fateful decision, Blanche Marie Hunckler helped found the Huntington County Gift of Life, which became the Huntington County Right to Life. Perhaps it was her love for God or her degree in nursing that fueled this desire, but she gave many years of service for the cause.

Hunckler served on the pro-life board for the Diocese of Fort Wayne-South Bend under Bishop William E. McManus, organized fundraisers for the Right to Life and instructed students at Huntington Catholic High School on this critical issue so that they could be prepared to argue the case for life. With her husband Paul, she raised her own children in the faith at SS. Peter and Paul Parish.

Unfortunately for this world, God’s work for her came to an end in December of 2020 after 100 years of life. But her passion and her defense of life continues to echo down through the generations of those who followed, particularly within her own family. Her great-granddaughter, Erica, has taken up the torch in the pro-life movement. 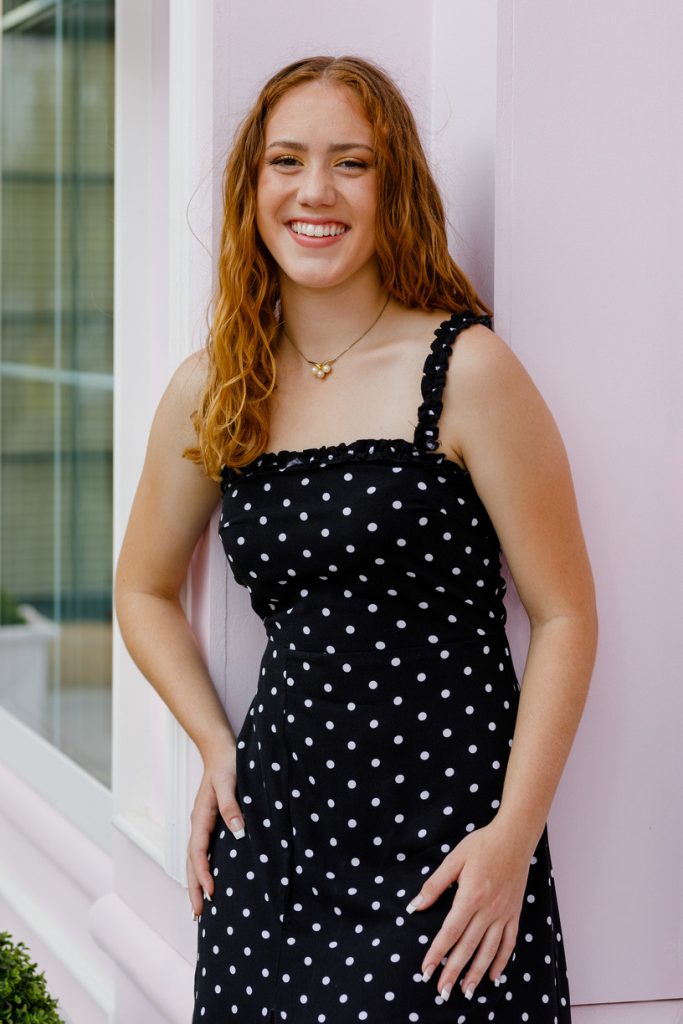 Provided by Erica Hunckler
Blanche Marie Hunckler had a deep love for life and helped co-found the Huntington County Right to Life office. Now her great-granddaughter, Erica, continues her legacy of supporting the unborn as a senior at her school, Guerin Catholic High School in Noblesville.

Erica lives in Noblesville, though she remembers the first time her great-grandmother took her to the HCRTL office as a young girl. “I didn’t fully understand what abortion was, obviously, because I was so young,” she shared. What she did connect with were the models on display showing an unborn baby from conception to birth, “and that’s an image that stuck with me throughout this growing passion of mine, because, to me, it’s so obvious, the humanity of the unborn.”

She described her great-grandmother as being active, even to her last days, with projects piled up on a desk at the nursing home where Blanche Marie spent her last few years. During that time, Blanche Marie did her best to continue supporting the efforts of the Right to Life organization she helped establish. Sadly, due to lack of volunteers, the Huntington office was recently forced to close its doors, though there is still potential for its reopening if new volunteers can be found.

“I know that my great-grandmother was a huge driving force for that resource in Huntington, and even though Huntington is such a small community, it’s proof that they were necessary for this community because they stayed going through this year, from the 1970s to this past year,” Erica said.

In her junior year at Guerin Catholic High School within the Diocese of Lafayette-in-Indiana, Erica sought to deepen her involvement in the pro-life movement. A group called Teens for Life was already established at her school, though it had been mostly inactive in her early high school years. She stated, “I was itching to do something, especially with changes in presidents and laws and there’s so much going on around the cause that I really thought there was more we could do.”

A new leadership team was established and “we signed a contract with Students for Life, so that national organization has allowed us to be involved in things we’ve never been involved with before.” Their regional coordinator, Mary Carmen, has been invaluable in engaging Guerin students in the cause, as well as providing materials for Erica to use at the school.

Now a senior, one of Erica’s tasks in the Students for Life organization at Guerin Catholic is to manage their social media. She was inspired to create a T-shirt for the club that would proclaim the pro-life message and wanted to find a catchy way to “express our mission.” A late-night brainstorming session gave life to a heart-wrenching poem about the pain of abortion and the counterarguments against it. She called it “Breaking the Silence.”

Part of the inspiration behind the poem are the videos that Erica often watches on Live Action’s YouTube channel, where volunteers begin conversations about abortion with people on the street. She believes that it is important to know the arguments for and against abortion and to have these types of conversations that allow others to come to the morally correct decision about abortion, and not to be coerced into it. In the poem, Erica hits the hard truths behind the industry’s lies, focusing on issues such as women’s rights and Planned Parenthood’s racially driven objectives.

“Something I really started to develop an understanding for through Students for Life is the deeper meaning of how this isn’t pro-women, it’s profoundly anti-women. That’s one of the biggest points that I really want to drive home with that,” Erica emphasized.

Erica took her poem to a group chat of friends who are involved in Students for Life and received positive responses. Additionally, another school asked if they could post it to their website and Instagram account. Erica even sent it to the HCRTL, which published it in their newsletter.

While it was her great-grandmother who first introduced her to the pro-life cause, Erica has embraced it as her own because, as she said, “It’s not just because the Catholic Church says so – they’re not blindly telling people what to do here – it’s really, life is a gift, and it begins at conception.”

Her father Paul is the oldest of Blanche Marie’s grandchildren. He stated that he, along with his wife Maggie, are very proud of Erica’s efforts on behalf of the unborn, carrying on the legacy his grandmother began so long ago.

At ten weeks
I have ten fingers
And ten toes.
I have two eyes,
Two ears,
One mouth,
And one nose.
I have a beating heart
That will continue to grow,
With love for you,
And the world I have yet to know.

This body of mine-
Yes- it is my own. Uniquely made,
By God, I was sewn
Into my mother’s womb
So, let it be known:

I was made
In the Image of God, The only One
Who sits on the throne.

With Him reside the Angels, Saints, and souls,
Who lost their lives,
As they were torn,

Let us not forget,
The parents filled with regret, And their need to be consoled.
No rally, protest, or political poll Can prepare a mother or a father, For the toll,
That abortion takes,
On their immortal soul.

To those who know
Of the lies that spread:
Share the truth with them instead.

No woman needs abortion,
To be a woman of ambition.
It is through this detestable invention,
That misogyny continues to be written, In our laws and in the hearts,
And in the minds
Of young gentlemen.

There is a popular pro-choice claim:
“Old white men are those to blame.”

With tongue in cheek
I say this is true,
For the justices in favor,
Of a woman’s “right to choose”

Nine justices
On the bench.
Nine white justices
Were appointed,
So they went.
To fulfill their duty,
Regardless of by whom they were sent.
Nine white male justices
And just two of them would
dissent.

From this decision came, Legalization
Of an incorporation
That inflicts pain.

I prefer to use their name,
Because Planned Parenthood,
Is seemingly unashamed.
Spreading lies for personal gain.
Exploiting women to boost their fame.
Stand up! Be not afraid!
Our bodies are not Planned Parenthood’s domain.

They prey on the marginalized, Marketing specifically in their location,
Establishing their disservice
With countless health violations.
Did someone forget to mention? Racism is their foundation-

48 years pass.
Generations are heartbroken Alas, hearts burst into shards Like a pile of shattered glass, Because the deafening silence, Of aborted children en masse, Thunders in the hearts
Made of glass.