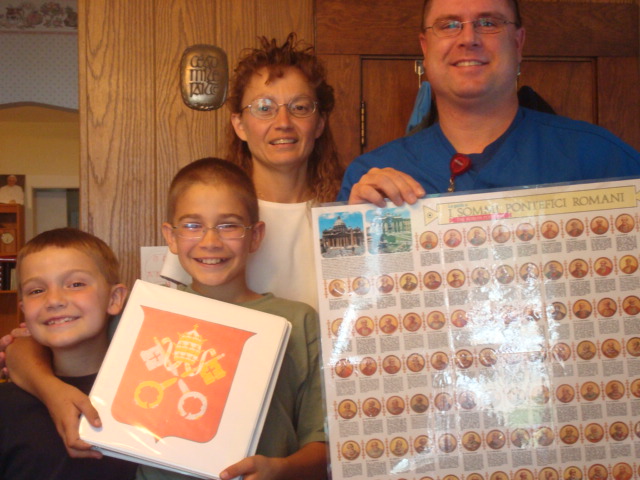 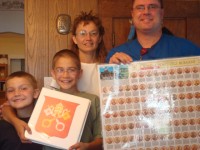 John Paul Fitzmaurice, 11, of Granger, has committed the names of all 265 popes to memory. From St. Peter to Benedict XVI he can recite them, in order of their ascension to the apostolate of Peter. In the photo is Gregory Benedict, John Paul, Rebecca and Mike Fitzmaurice.

GRANGER — Eleven-year-old John Paul Fitzmaurice has completed a project so difficult that few lay men and women even attempt it.

The Granger boy has committed the names of all 265 popes to memory. From St. Peter to Benedict XVI he can recite them, in order of their ascension to the apostolate of Peter. They roll off his tongue so quickly that it’s hard to keep up with him on a “Popes Throughout History” wall chart. Just 20 seconds into an impromptu recitation, he’s already down to Pope No. 31, St. Eusebius.

The Fitzmaurice family attends Queen of Peace Parish in Mishawaka, where John Paul and his brother, 8-year-old Gregory Benedict, are altar servers at daily Mass.

Father Dan Scheidt has been the pastor at Queen of Peace since 2007. It was his arrival at the parish that precipitated John Paul’s memorization project.

“My cousin told me that Father Scheidt set this challenge when he was at Marian. His challenge was to memorize all the popes, but no one ever did it. I thought, ‘I want to try that,’” he said.

Mom Rebecca home schools John Paul and his younger brother Gregory in both religious education and regular academics. At first, she and John Paul’s father, Mike, thought he was too young to take on such a large project. But in 2009 they agreed and added the project to his daily lessons.

He began in March by memorizing 10 popes a week. Quickly realizing the size of the task, Rebecca and John Paul decided to use a memorization system laid out by Kevin Vost in his book, “Memorizing the Faith.”

First drawing maps of rooms in their home, neighborhood and church, they added symbols that would cue John Paul to the name of a pope. For example, any pope numbered “the eighth” wears sunglasses on the drawing, because sunglasses look like a sideways eight. Then the drawings and cues were committed to memory at the rate of 10 popes every two weeks.

His best time for repeating the list is down to a mere six minutes. Although he’s discovered that it’s not quite as rare an accomplishment as he first thought, he’s still proud that he’s in select company.

“I thought before I’d be maybe one of 10 people who could do it. Then I learned that all priests have to do it. So now maybe I’m one of hundreds,” John Paul said.

The project fit in well with the Fitzmaurice family’s deep and traditional Catholic religious practices. In addition to daily Mass, both boys practice daily prayers both in English and Latin and have memorized other precepts of the faith, such as the corporal works of mercy and the Marian dogmas.

“Kids this age just soak it in so much I think this is the time when they can do something like this the best,” Rebecca said.

Last month, John Paul gave his first public popes’ recitation at a Queen of Peace first Communion Mass. He was nervous at the time, John Paul said. But now, he can tell the story of the recitation and laugh.

“Father’s point was how long the Eucharist has been with us, so he listed all of the U.S. presidents — and of course it’s been with us even longer. Everybody thought that was great. I think they clapped. Then Father (Scheidt) says, ‘Oh, you haven’t seen anything yet.” With his back to the audience to steady his nerves, John Paul then ran down all 15 rows of 18 or so pontiffs.

John Paul wants to give a recitation for Pope Benedict XVI at World Youth Day, but mom won’t let him go before he’s 14, so he’s set his sights on attending the 2014 event.