One of the beautiful aspects of the Catholic faith is its many forms of spiritual expressions, which appeal to different personalities, generations, families and cultures. Some enjoy the richness of the Latin liturgy. Others enjoy large parishes with contemporary music and phenomenal homilies. Still others prefer quiet, rural churches where they know the pastor well and sing familiar, traditional hymns. 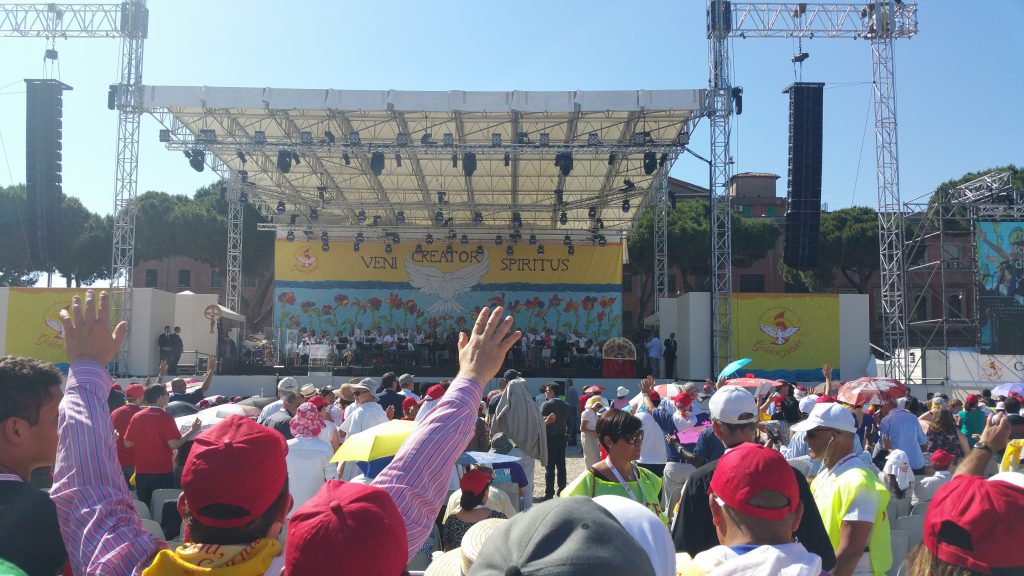 Members of the Catholic Charismatic Renewal praise God through prayer and music at a golden jubilee celebration in Rome in June. Many countries were represented, especially religious sisters and priests from Africa and India.

As each person is created with distinct personalities and gifts, so, too, are different expressions of worship within the Church a fulfillment of 1 Corinthians 12:12: that we are many parts, but one body in Christ.

One such expression of faith is the Catholic Charismatic Renewal, the origins of which are nestled in the history of the University of Notre Dame. Unlike specific movements, which were begun with intentionality by people who had a particular vision for beginning something new, the Catholic Charismatic Renewal (also known as CCR, or “the Renewal”) was started unintentionally, or rather, providentially.

Jill Boughton, a member of the Renewal since its infancy, said, “Beginning around the turn of the 20th century, Christians read the Acts of the Apostles and wanted to encounter the Holy Spirit in a similar way to how the early Apostles did: in a personal, intimate way.” In 1967, a group of Catholic students and professors at Duquesne attended a Cursillo retreat and read the book, “The Cross and the Switchblade,” which inspired them to learn more about the gifts and movements of the Holy Spirit.

What wasn’t expected, however, were the ways in which the Holy Spirit became manifest. Boughton explained: “There is often an emotional dimension to this ‘spiritual baptism,’ but not always. It’s a strong sense that Jesus is right there with you and in you. Sometimes it’s a healing of memories. For others, it’s speaking in tongues or interpreting tongues. And for some, Scripture comes alive and is very personally addressed to them.” 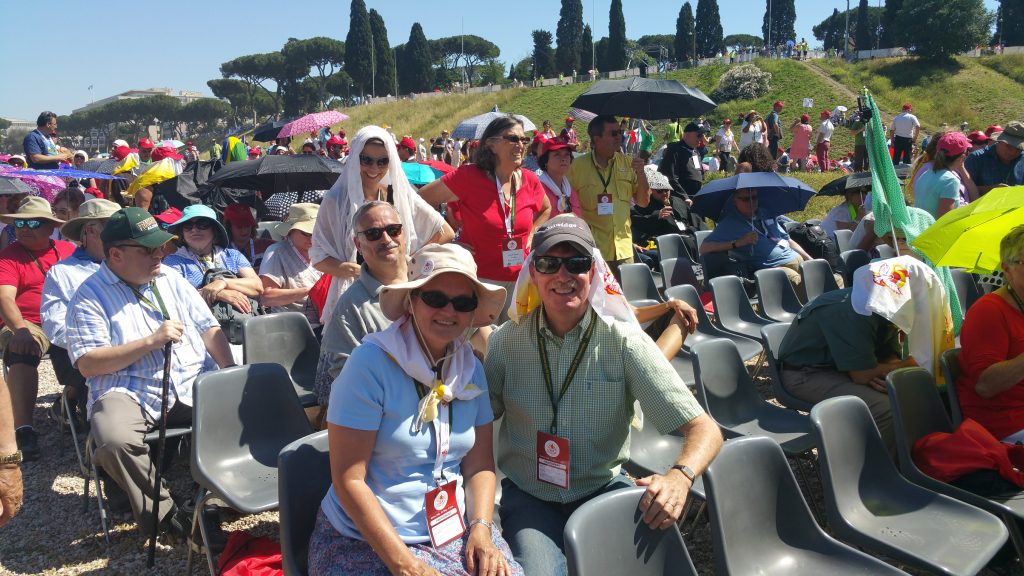 John and Betsie Pendarvis, South Bend, members of the Catholic Charismatic Renewal, enjoy their time celebrating with other charismatics at the movement’s golden jubilee celebration in Rome this past June.

Essentially, members of the Renewal understand that their encounter with the Holy Spirit is an enlivening of the gifts they received at Baptism and that were increased in them at Confirmation. Many believe that the expression of the gifts of the Holy Spirit they have been given is a form of spiritual maturity and a depth of understanding how God wants each of them to use their gifts for the good of others and His glory.

Today, members of the Renewal participate in charismatic prayer groups, which often follow a celebration of the Mass. Boughton, in fact, attributes her conversion to Catholicism to exposure to the Renewal, and its connection to the sacrifice of the Mass, in the early 1970s. “I came to Notre Dame in 1970 to teach and very quickly stumbled upon CCR,” she said. “At that point, I was a Lutheran, so I had evangelical roots. But the group I stumbled into was very centered around daily Mass in the dorms. I was puzzled by the fact that these people prayed and spoke very similarly to my evangelical friends but also had a strong devotion to Our Lady and believed in the real presence of Jesus in the Eucharist.”

Some, like Boughton, may have been taught incorrectly about Catholicism during the tumultuous eras of the 60s and 70s, but many have come into the fullness of the faith by way of the Renewal. It is a particular Pentecostal, evangelical style of worship that appeals to many Protestants, some of whom erroneously believe that all Catholics are very private and stoic in their prayers.

Despite skepticism about the movement, CCR has been affirmed by four pontiffs, including Blessed Paul VI, St. John Paul II, Pope Emeritus Benedict XVI, and Pope Francis. In fact, Pope Francis invited members of the Renewal to a Golden Jubilee celebration this past spring, aptly concluding with a Pentecost Mass on June 4.

Two South Bend members of the Renewal, John and Betsie Pendarvis, were able to attend the Golden Jubilee, held in the Circus Maximus in Rome. The couple’s Renewal roots began to grow in Fort Worth, Texas, during the 70s and 80s, when they met in college. “The Renewal grew during those times, so many parishes in the Diocese of Fort Worth had CCR prayer groups,” John said. “We knew that our role in the Renewal wasn’t just to promote the charismatic form of prayer, but to serve the Church.”

After becoming involved in the Renewal during their young adult years, the Pendarvises saw the good fruits of those involved in CCR. They, among others in their prayer group, were involved in organizing diocesan conferences, retreats and seminars. They recorded a music album. Some became leaders in the Right to Life movement. Others became directors of religious education, music and liturgy directors in their parish, and even the editor of a diocesan newspaper.

The Pendarvises saw the Catholic Charismatic Renewal as “a great grace.” These are comparable words to Pope Francis’s description of the Renewal, on which he elaborated at the conclusion of the Golden Jubilee celebration. John noted, “He sees it as a ‘current of grace’ that the Lord has gifted the Church at this particular time.”
“I’ve worked in the Church for many years. Hearing Pope Francis speak to us in terms of acknowledging and encouraging the Renewal — the release of the Holy Spirit in a new way — is, and should be, normative. This should be what every Catholic asks for and longs for. Pope Francis wants a Life in the Spirit seminar in every seminary, every parish, every diocese, because it’s something all Catholics should know about,” Betsie added.

Both John and Betsie were very touched by their experience in Rome. John shared that, as he heard Pope Francis address the crowd of over 50,000 people, he was moved in a surprising but powerful way. “Sometimes you’re not sure if what you are doing for the Church is valued,” he said. “There are times your faith is tested. For Pope Francis to say, ‘thank you for what you’ve done for the Church’ was such a consolation.”

Both the Pendarvises and Boughton agree that what they’ve learned through their involvement in the Renewal is the greatest treasure we all have is Jesus. “Jesus is who we encounter and serve through the many ministries in the Church,” concluded John. “Indeed, we are all many parts, but one body in Christ.”