While the customary joy of entrance into full communion with the Church has been postponed for the present time, some candidates have been able to receive this additional period of preparation with optimism and gratitude.

For 82-year-old Jane Zartman, the journey toward full communion in the Catholic faith had been a long-awaited process even before the government safety measures brought about delays. During last year’s Easter Vigil, Zartman joyfully watched her daughter and three grandsons receive the sacraments of initiation at Queen of Angels Church, Fort Wayne. Baptized as an infant but raised in a Methodist home without significant religious instruction, Zartman was deeply inspired to witness her family take this courageous step. “I was very excited and proud of them,” she shared. “It got me thinking that I needed to do it, too.” After talking to Father Zachary Berry, pastor of Queen of Angels, she was admitted to the next class of candidates for the Rite of Christian Initiation of Adults. “I asked Father Zak if I was too old to do this, but he assured me that I wasn’t!”

As parents, Zartman and her late husband, Vance, had given minimal emphasis to providing faith formation for their two children. She revealed, “Neither of them were baptized. My husband and I discussed that when they were old enough to decide for themselves what they wanted, that’s when they should be baptized.” However, given her recent experiences, she now feels differently. “If I had to do that over, I would not go that route again. But that’s what I did then.” 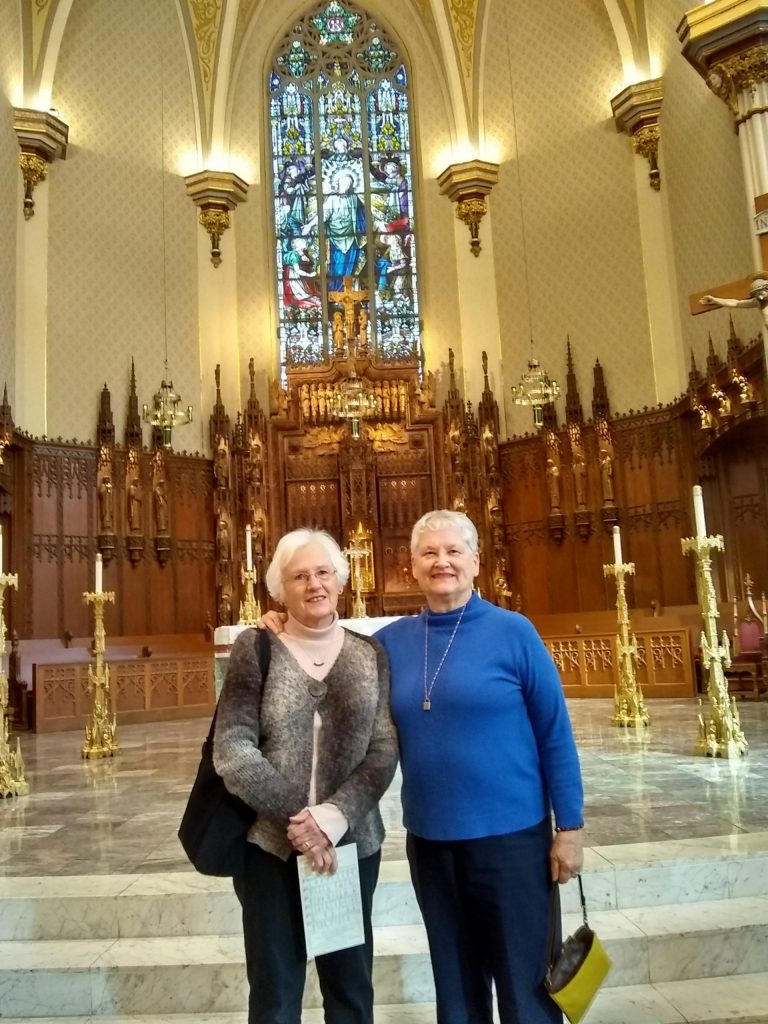 Provided by Marilyn Benedict
Jane Zartman, left, stands with her sister and confirmation sponsor Linda Trowbridge at the Cathedral of the Immaculate Conception, Fort Wayne, following this year’s Rite of Election ceremony. Zartman will enter into full communion with the Catholic Church when public Masses resume.

Her daughter Gretchen took an active and intentional step in faith when she chose to enroll her sons in Queen of Angels School, given its proximity to their home. This cultivated a new awareness of Catholicism for the entire family, including Zartman. She shared, “the boys have been there since kindergarten, which led them to see the faith and become attracted to it, leading to their getting baptized last year. The religious education they receive has helped me, too. I’ve been a part of their Queen of Angels experience for eight years, and throughout the last three I often picked them up and brought them to my house to help with homework. By helping them with their religion I learned it more in-depth for myself.”

These experiences allowed her to become more acquainted with both the school and parish. “I knew a lot of the staff, I felt very comfortable, I felt at home. I began going to Mass occasionally and then after the Easter Vigil I started attending weekly. When my daughter and her boys entered the Church last year, I thought it was about time for them. She probably thinks the same about me this year.”

Zartman also shared that conversions to Catholicism seem to run in the family, as both of her sisters entered the Church over 30 years ago. They did so on the same day and in the same year, yet in different states and completely unbeknownst to each other. She also has a cousin who, initially ordained an Episcopal minister, is now a Catholic priest.

Zartman shared that her RCIA instructions have been captivating, illuminating and inspiring. “I owe most of what I have learned to Father Zak. He started with salvation history and got me hooked. Additionally, this has made me closer with my family, as the boys now help me with my homework, too. I think this means a great deal to them.”

Although the date of her confirmation and reception of first holy Communion are currently unknown, she is grateful for the additional weeks to deepen her awareness of the mysteries she is preparing to enter into. “This time between now and whenever it is, I’m going to get confirmed, I am still doing a lot of reading and watching videos on Formed.org. I also watch Masses online and I enjoyed watching Bishop Rhoades’ Easter Sunday liturgy.”

She continued, “God knew I needed this little extra time. I can study some more, as there are still things I don’t totally understand, but I’m working hard to learn what I need to know. I’ll continue to read, watch videos and listen to talks. I’ll get there!”

She also expressed her gratitude for those who have aided her along the way and for the prayers and support in this time of anticipation, as she and many others eagerly wait to receive and be received by the Lord Jesus in the coming weeks.