NICOSIA, Cyprus (CNS) — Pope Francis told migrants that, like them, God dreams of a world where everyone recognizes each other as brothers and sisters.

God “asks us not to be content with a divided world, divided Christian communities, but to journey through history drawn by his own dream: the dream of a humanity freed of walls of division, freed of hostility, where there are no longer strangers, but only fellow citizens,” he told migrants during an emotional ecumenical prayer service Dec. 3 in the Church of the Holy Cross in Nicosia.

Thamara da Silva, who came from Sri Lanka, told the pope: “Every day, I have to reduce everything that I may be, or hope to be, or want to become, into a check mark next to a box on a form. I have to use a word or two to explain myself to one of the few who might choose to ask or to acknowledge that I am even here. What do I say? Usually I must choose ‘xenos,’ ‘foreigner.’”

The Holy Cross church compound, which includes the Vatican nunciature and the offices of Caritas Cyprus, is on the U.N.-patrolled green line separating the largely Greek Cypriot southern two-thirds of the island from the predominantly Turkish Cypriot northern third.

Cyprus also has the European Union’s highest per capita number of migrants, refugees and asylum seekers. Many of them travel across the sea from Turkey, landing in the north where there are no border controls,  then try to sneak across the green line.

Tensions and frustration have increased because of the combination of increasing migration and suspicion that Turkey is promoting it, along with the economic challenges COVID-19 has posed to an island reliant on tourism.

Reaffirming the Dec. 2 statement of Cypriot President Nicos Anastasiades, the internal affairs ministry said Dec. 3 that Pope Francis had arranged for 50 asylum-seekers to be transferred to Italy. 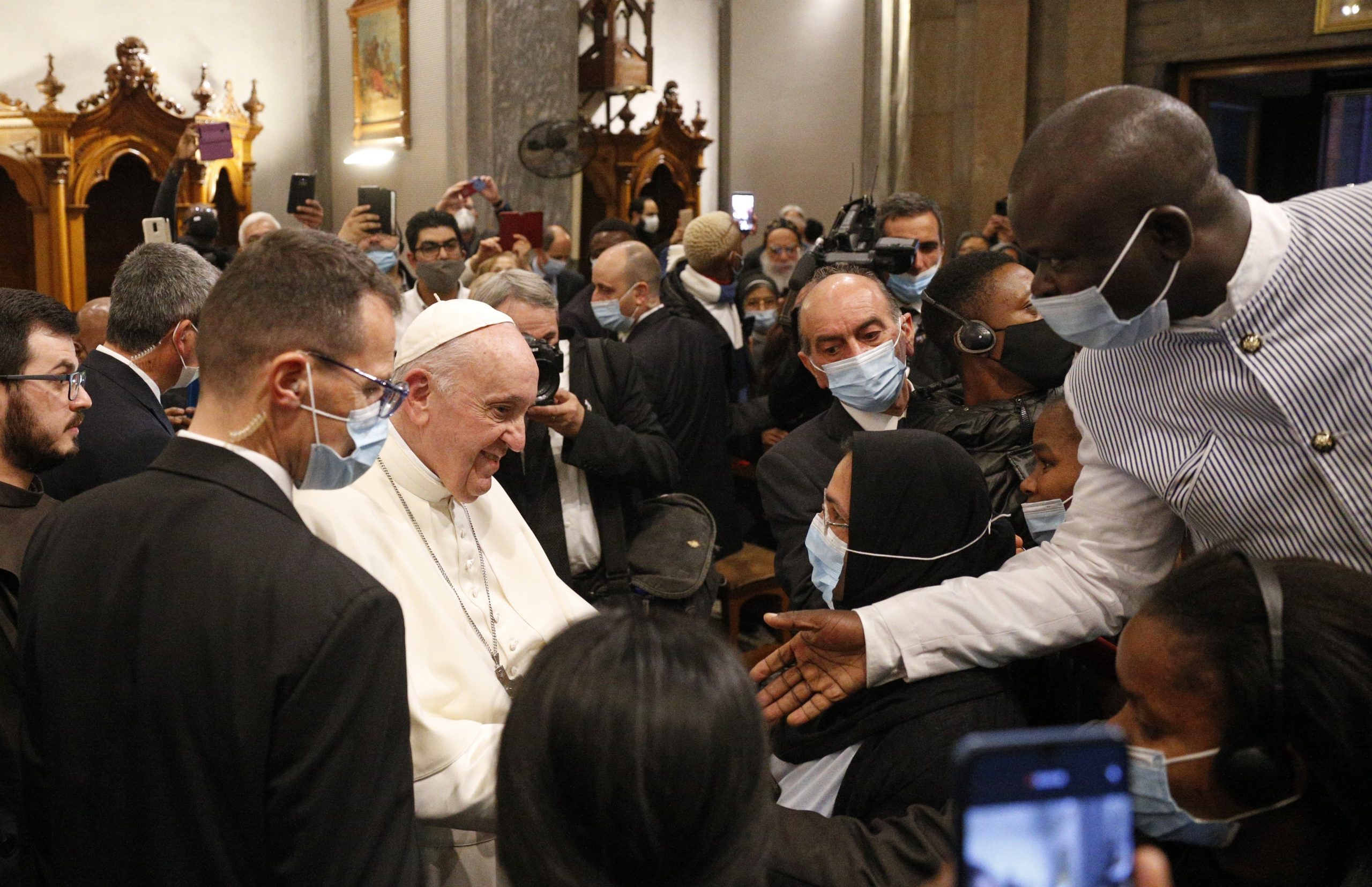 Pope Francis greets people as he leaves an ecumenical prayer with migrants in the Church of the Holy Cross in Nicosia, Cyprus, Dec. 3, 2021. (CNS photo/Paul Haring)

Included in the group who will be moving, the ministry said, are Enjei Grace and Daniel Ejube, both from Cameroon, whose story has been told in newspapers around the world. Thinking they could enter Europe through northern Cyprus, they have been living in a tent on the green line since May — with neither side willing to take them in.

Later, the Vatican announced Pope Francis would help move a dozen migrants from Cyprus to Italy before Christmas. A spokesman for the Vatican said that did not rule out more following later. News agencies were reporting that the others would follow in January and February.

While he did not mention taking the migrants, Pope Francis told the group in Holy Cross Church that the Cypriot government cannot be blamed for knowing that it cannot welcome, house and provide for all those arriving in the country; others must help.

Elizabeth V. Kassinis, executive manager of Caritas Cyprus, told the pope the Catholic charity is trying to respond to overwhelming needs. “We are working to fill the gaps in the social safety net as best we can.” 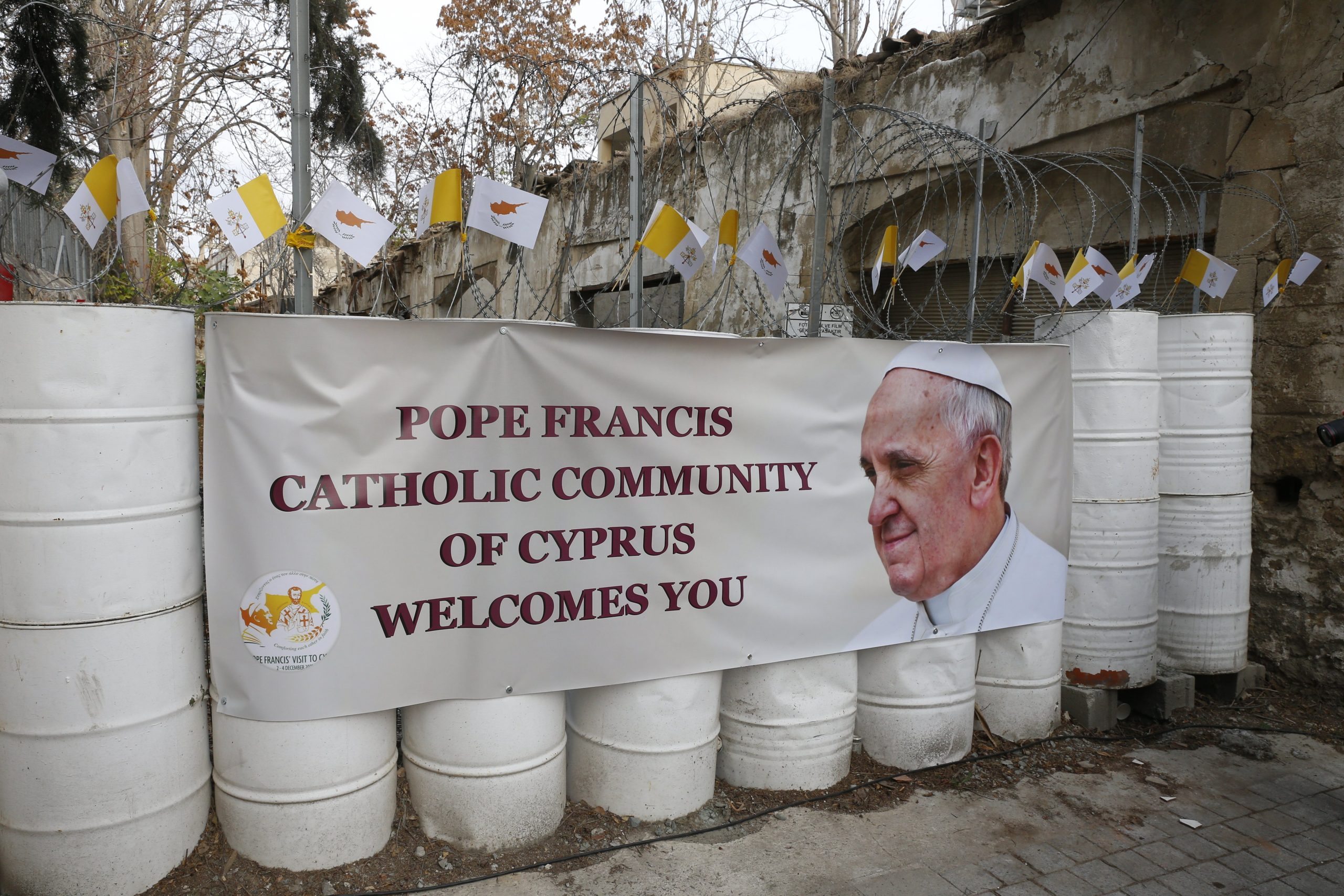 A banner showing Pope Francis hangs on a barricade made of barrels in the U.N. Buffer Zone in Nicosia, Cyprus, Dec. 3, 2021. The pope was on a five-day visit to Cyprus and Greece. (CNS photo/Paul Haring)

“Thanks in large part to our partnership with Catholic Relief Services,” the U.S. bishops’ overseas aid agency, and other donors, “we kept our doors open throughout the pandemic and provided support to more than 10,000 individuals across the island.”

Caritas staff and volunteers have a dream, too, she said. “We dream that more can be done, more people can be reached, more communities transformed, more of us involved in each other’s lives.”

Maccolins Ewoukap Nfongock, originally from Cameroon, told Pope Francis, “I am someone pained by the lack of love that makes me feel less than others, unwanted, a burden; by the subtle hate that robs me of a kind word, a much-needed smile on a cold day; by the barriers of the community in which I find myself.”

Rozh Najeeb, from Iraq, told the pope he has been on a journey, forced to run from “violence, bombs, knives, hunger and pain.”

Mariamie Besala Welo, from Congo, described herself as a person “full of dreams,” big dreams. “I dream of a world where no one is forced to fight, to do battle, give up, flee or cry — except maybe for joy,” she said.

But she said she has “small dreams,” too. “I close my eyes and dream of the smell of my grandmother’s cooking, the fields after a good rain that will nurture the seeds, the sea breeze.”

“I dream of smiles,” she said, instead of people being suspicious of her or surprised that she can speak Greek.

Making it clear that he had received the text of their speeches weeks ago, Pope Francis said they reflected “the beauty of the truth” and the powerful way God reveals “his kingdom of love, justice and peace” to those without clout in the world.

“In the faces of our marginalized and discarded brothers and sisters,” including migrants seeking a new home, Christians must see the face of Christ, he said.

The stories of the migrants in Cyprus, the pope said, make him think of the thousands of others in many parts of the world who feel forced to flee their homes, sell all they have and yet cannot be sure they won’t drown at sea or die in a desert.

Apologizing for speaking so long, Pope Francis told the group, “It is my responsibility to help open people’s eyes.”

Especially in a country “marked by a painful division,” Pope Francis said, people longing for unity must begin by accepting others as kin, recognizing the human dignity of each person.