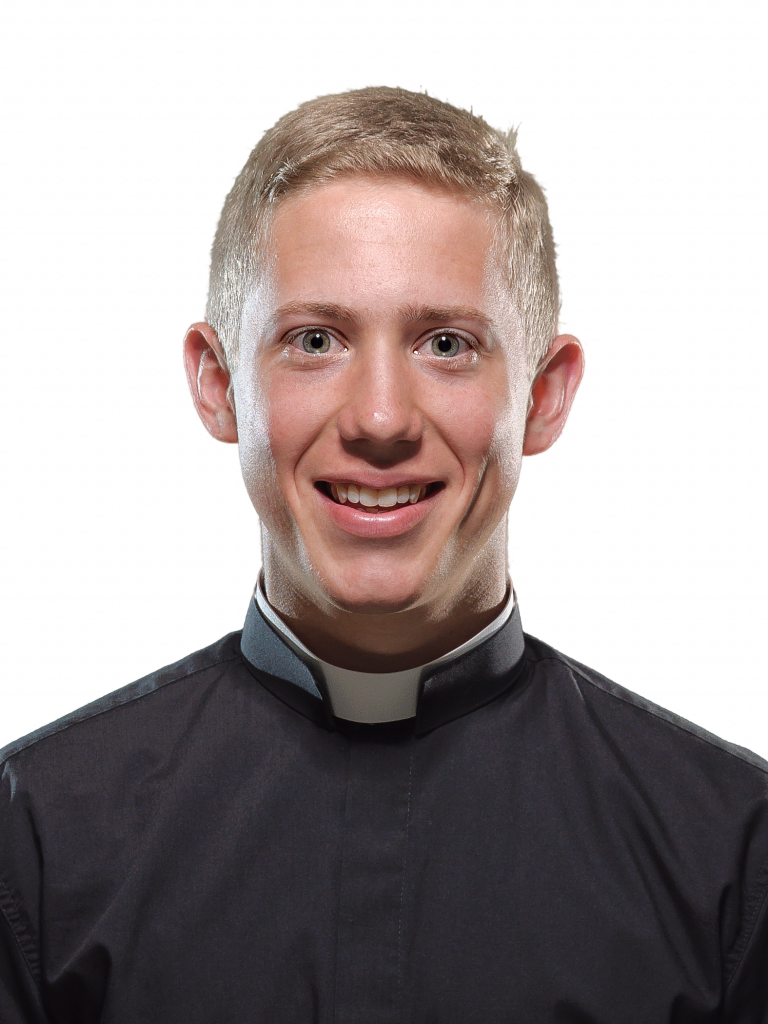 For Benjamin Landrigan, candidate for ordination to the diaconate on June 6, there was no aha! moment, no lightning-bolt call to the priesthood that he could no longer choose to ignore. He knew from an early age that he wanted to become a priest. “Most people don’t think about it their whole life,” said Landrigan.

“The earliest I remember thinking about it was when I was in grade school, and I read these lives of the saints books we had at home.” Landrigan recalled being drawn to the saints from that time on, fascinated by the purpose in their lives and by their holiness. He knew he wanted to be a saint, to go to heaven, and he saw that many of the male saints he admired were priests. “So that was when that idea started in my head. I never stopped wondering about it after that, I was just always thinking about it.”

As the sixth of seven children, he grew up in a household that was deeply Catholic, although Landrigan couldn’t elaborate about what made his home life unique. He spent his life surrounded by Catholicism, including nightly family dinners, discussing topics concerning the faith throughout the week and watching movies about saints. He remembers how the family began praying the rosary together daily when he was in middle school. Faith “was part of the atmosphere at home.”

His parents, Daniel and Linda Landrigan, as well as his older siblings, served as living models of their Catholic faith. The family is involved in ministry at their home parish of St. Elizabeth Ann Seton in Fort Wayne, and Landrigan has always loved being an altar server. Being around the holy sacrifice of the Mass in a closer way helped deepen his connection to the priesthood.

This deep love led him to volunteer to serve at Masses and weddings whenever a server was needed. For about 15 years, he served at every Easter Vigil Mass at St. Elizabeth, the only exception being the year he served for the bishop instead.

By the start of his senior year of high school, Landrigan had known he wanted to apply to the seminary. After graduating from Homestead High School in 2014, he was immediately accepted, under the guidance of Msgr. Bernard Galic, former vocations director for the Diocese of Fort Wayne-South Bend. He credits the guidance of former St. Elizabeth pastor Father James Shafer, with whom he met almost monthly, with developing his vocation; as well as the influence of young priests such as Father Andrew Curry and Father Benjamin Muhlenkamp, who served as pastoral associates at St. Elizabeth. “Father Drew was the first priest I had interacted much with on a personal level,” Landrigan stated.

Of the saints close to his heart, two priestly examples stand out: St. Edmund Campion, a Jesuit priest and Catholic martyr in England under the reign of Queen Elizabeth I, and Maximilian Kolbe, saint of Auschwitz. Landrigan first read about St. Edmund as a child in the adoration chapel at St. Elizabeth. St. Maximilian had such an influence on him in middle school that he chose Maximilian as his confirmation saint.

Landrigan’s time in the seminary has cemented his devotion to the priestly life, he said. Throughout his time at Mount St. Mary’s in Emmitsburg, Maryland, he has grown closer to his seminarian brothers, and makes it a point to keep in contact with them outside of school through regular phone calls.

The biggest challenge he has had to face in seminary was not the rigorous academics but accepting the knowledge that he was ready to fulfill many of the priestly duties. “I was very intimidated by the ideas of visiting someone who was dying or someone who had dementia, or teaching in a classroom full of kids,” Landrigan confessed. But he feels his experiences in the seminary have prepared him for the more difficult aspects of priesthood.

Seminary formation has helped shape him into the instrument that God has called him to become. “Over the years, I’ve grown to love those things that used to intimidate me.”

While the priesthood is still a year away, what he most looks forward to as a priest is bringing the sacraments to other Catholics. “Ultimately, that’s what it’s about: living a life of purpose and meaning that is only found in God. That’s what everyone wants; everyone looks all over the place, but we’ve got the real answer here, in the Church.”

Both Landrigan and his parents eagerly await the day of ordination to the diaconate, though it does feel a bit surreal to him, since he has been waiting to commit his life to God for so many years.

There were times he wondered if his call was from God or simply his own longing. “I’ve always thought it was good for people to know that God can call you in simple and ordinary ways. A lot of times people are looking for the extraordinary sign, and they can really wrestle with the idea that God can work in their ordinary life.”