Wedding dress chosen, venue booked, invitations sent out. All the tiny details were neatly arranged, until COVID-19 unraveled the carefully made plans.

Brides and grooms in the Diocese of Fort Wayne-South Bend have been agonizing the past several weeks over how, or even if, to go forward with one of the biggest days of their lives. What are a bride and groom to do when gatherings of more than 10 people are prohibited for everyone’s safety?

Three couples in the Diocese of Fort Wayne-South Bend shared insights gained from their own recent experiences on handling the big day – and learning to follow God’s plan — with Today’s Catholic.

‘Special in a way we hadn’t planned’

Over 300 guests were invited to St. Monica Church in Mishawaka for Kate and Tom Kurzhal’s March 28 wedding. On March 15, those plans began to fall apart. After whittling the guest list down to the required 250 (at that time) through a series of “uncomfortable” phone calls, the stay-at-home order came into effect in Indiana, limiting gatherings to 10 people. With no available hairstylist, no cake decorator and a limit of 10 guests, the couple had to make a choice. 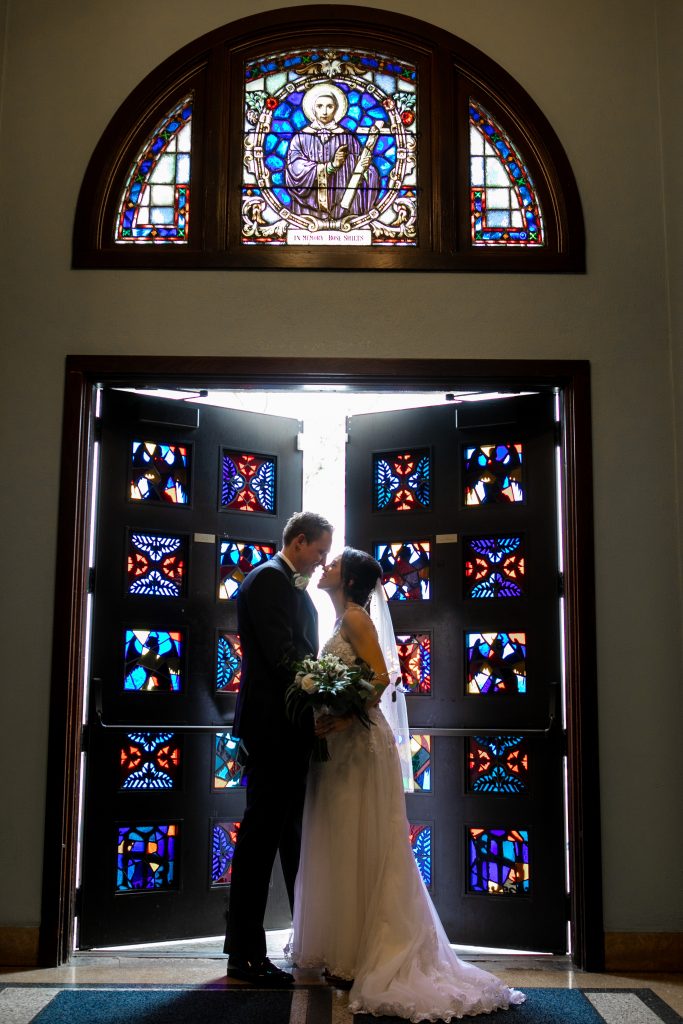 Provided by Kate Kurzhal
Even though COVID-19 decreased attendance at their March 28 wedding dramatically, Mishawaka residents Kate and Tom Kurzhal say they still walked away with each other, which was “everything we hoped to gain.” They have tentatively planned a reception for July.

“Tom and I had a talk,” Kate stated, regarding their decision to proceed with the wedding. “At the root of it all, we picked this date to be together. Are we going to move forward even if it’s you, me and Father Jacob (Meyer) in the church? That was what we, as a couple, decided.”

At every step during the two weeks before the wedding day, Tom and Kate agonized over the decision. As the day approached, they faced some backlash. “On top of our wedding falling apart from what we envisioned, those kinds of comments were really tough,” Kate admitted.

The couple received more reassurance than disapproval, however. “We felt the support that we got from the rest of the immediate family, friends and people around was overwhelming — (it) definitely overshadowed the maybe three negative comments,” Tom added.

Although they may not have had the full celebration originally planned for the big day, the Kurzhals now have unique stories to tell — including an aunt and uncle who, though they couldn’t attend, still dressed up for the wedding along with friends who FaceTimed the couple from Nashville. Their wedding album boasts pictures of “guests” who took selfies toasting the couple. Father Meyer lovingly walked with the couple in their decision process, they said, and livestreamed his own toast to them on Facebook.

While they are hopeful the reception they rescheduled for July will take place, neither regrets going forward with their smaller wedding. “We were making a promise to each other and beginning our lives together, and if that’s the only thing we could uphold about our day, then we still left with everything we hoped to gain,” Kate said. “The marriage is the foundation that we’re building. We didn’t feel like it was in our best interest to put that foundation off.”

Tom joked that without all the stress of a usual wedding, they were much more relaxed and able to focus on each other. Going through such a trial early in their marriage has been very eye-opening, too: “It puts you to the test,” Tom stated. It showed the Kurzhals that the trivial details of the wedding are of lesser importance. Kate said, “In some ways, this was God telling us that none of that mattered.”

She offered advice to other brides in the same situation. “Really be there for each other. Remember why you’re doing what you’re doing and lean into each other instead of turning out.”

Brandon Gernhardt and Alexis Adams work in the medical field and watched the spread of COVID-19 with trepidation. At first, they were not overly worried since their wedding was scheduled for June 27. With the suspension of public Masses, however, Father Tom Shoemaker, pastor of St. Charles Borromeo Parish in Fort Wayne, sent the couple an email indicating their guest list might need to decrease. By the end of March, Gernhardt and Adams knew they needed to make a decision. 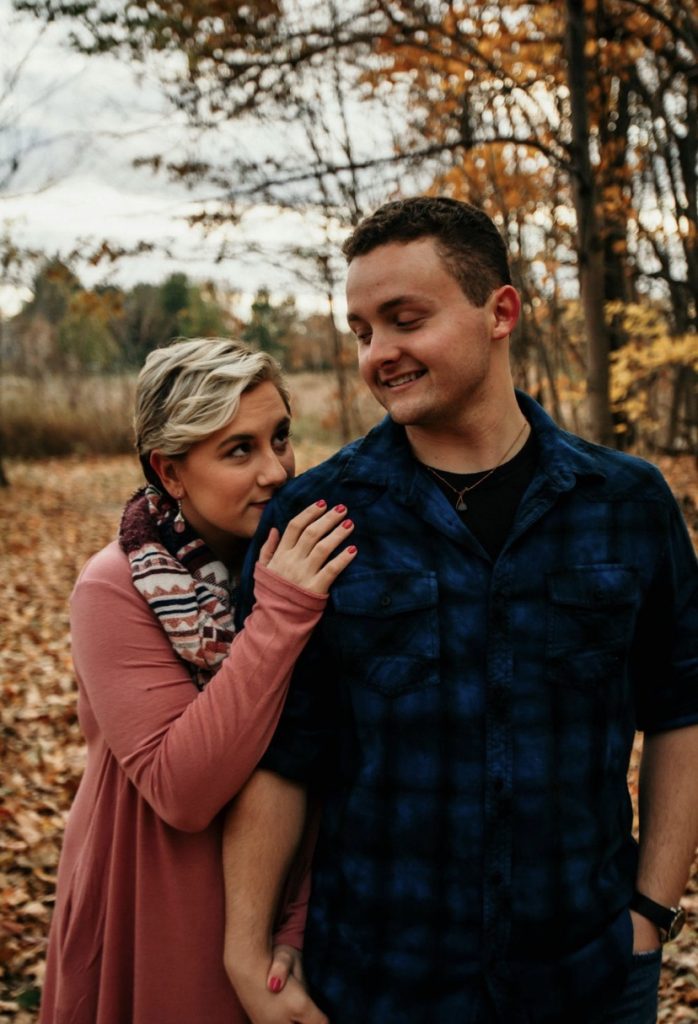 Provided by Alexis Adams
Having all of their family present was so important to Brandon Gernhardt and Alexis Adams of Fort Wayne they postponed their June nuptials. It was a stressful decision, they say, but handling it together gave them the opportunity to learn of how to manage challenging moments once they’re married.

“We finally just went ahead and made the final decision based off of what our gut feeling was,” Adams shared. Since they have extended family whom they wanted to include in the ceremony, some from out of town and many who are elderly, they decided to postpone the wedding until the fall. “We made sure that option was on the table — that all our vendors were available,” she noted.

Gernhardt emphasized how important is was for them to have their families present to witness their vows. “It’s huge for us; our families are so big.”

Neither of them struggled immensely with the delay. “We’ve been engaged for quite a while,” Gernhardt stated — three years, to be exact. Both of them wanted to finish their education and begin their careers before taking the step into marriage. Adams added, “I’ve always wanted a fall wedding, so it didn’t bother me too much.”

The one downside was that St. Charles was no longer available for the date that they chose in the fall — Nov. 7. “We were a little bummed out about it, but we’re getting married at (the University of) Saint Francis, which is where we met and where he proposed so it’s a little extra special. I think God works in mysterious ways to make it work out for the better.”

Father Shoemaker will also be unable to officiate at the time of the new rite, so Gernhardt is hoping to contact another priest with whom the couple has a fond relationship to perform the ceremony.

Together, they have given God control over their future. “Prayer goes a long way,” Gernhardt stated. He emphasized that any couples facing a similar situation should turn to God. “Pray about it, talk to your families.”

The couple consider themselves very blessed to have had the time to think things over and make the decision together. Safety of their family was of utmost importance, because Gernhardt works as a nurse at Parkview Regional Medical Center. Fortunately, they had not sent out the invitations they ordered, and both the invitation company and their venue allowed them to make the necessary changes.

Although it has been stressful, including many long, late-night discussions, Gernhardt has a positive perspective. “Think of it like a roller coaster. If you didn’t have the ups and downs, it’s just a level plain … Stuff like this just goes to show how couples deal with stress and kind of gives an idea of what marriage is like.”

‘It’s about us getting married’

Every bit of the planning was completed for Phillip Sordelet and Gwen Meyer’s May 9 wedding, also at St. Charles. Invitations had been sent out for 420 guests and RSVPs had poured back in, some as recently as early April. But barring a lifting of the restrictions, both of them knew their big wedding had become impossible. “It was hard at first, Meyer stated. “We’d been planning this for over a year and a half, and we just wanted to go through with it.” 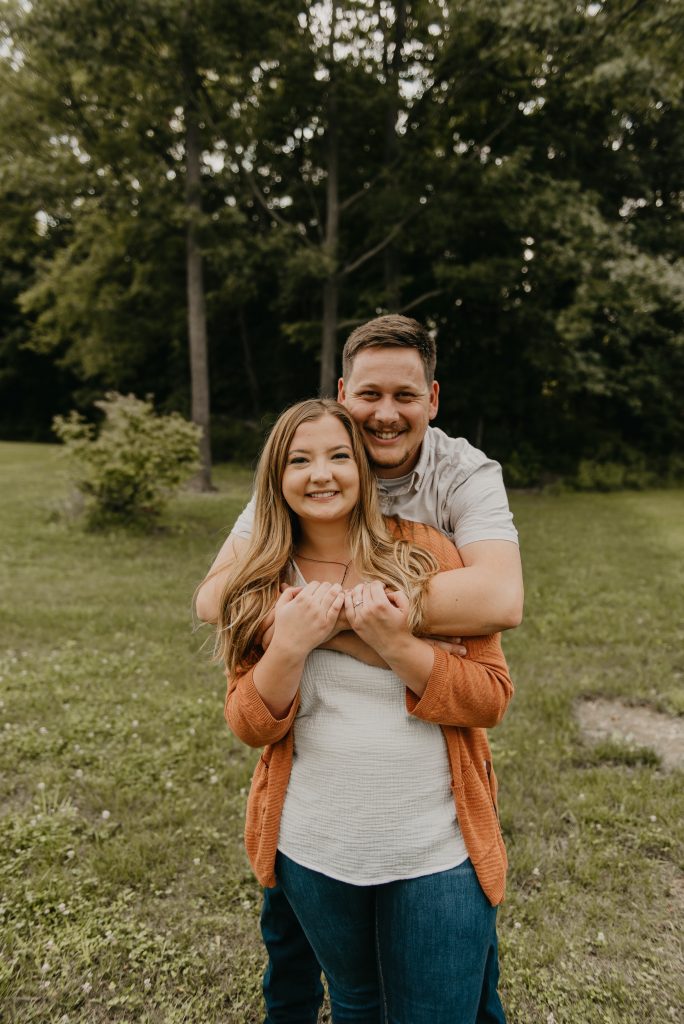 Provided by Gwen Meyer
Although the idea of so drastically changing their plans gave Phillip Sordelet and Gwen Meyer pause, the Fort Wayne couple say ultimately those plans were secondary to their joining together before God. They’ve chose to proceed with their May wedding.

Meyer works as a pediatric nurse, and Sordelet works long hours at Steel Dynamics; so getting their schedules to coordinate long enough to discuss changing their plans was difficult. With all the uncertainty, there was also no way to know when they might be able to reschedule their vows. In the end, the couple decided all the extras that go along with a wedding were secondary. They felt God nudging them to keep their wedding date.

With Sordelet’s large extended family, it was difficult to choose who would be present in the church. “Our priest told us that we can have 10 people at the wedding. Phil has 11 siblings, so it’s a little complicated, but we’re making it work.”

Even the bridal party will be unable able to attend, but Meyer stated that they were all very understanding. There have been other adjustments as well, such as finding a presentable suit for the groom to wear when tuxedo shops and department stores are closed.

They have learned to lean on each other and the rest of their family. Sordelet’s mother contacted her siblings to keep the relatives updated. Word was also spread through a private Facebook group for friends and family members. “We’ve gotten a lot of supportive comments on it,” Meyer said, with loved ones encouraging them and ready to celebrate when the time finally comes.

They worried about all the money they had already deposited at various vendors, but Sordelet said that “for the most part, the vendors worked with us … because I think they understood that it’s a tough time for everybody.”

They have no plans as of yet for rescheduling the reception, stating that they have learned to be flexible. They want to wait “till we’re in the safe zone,” Sordelet said.

Prayer has been their constant companion. “It’s our first big hurdle with problem-solving with each other,” Sordelet shared. “I think we did pretty well.” They feel the experience has brought them closer together and taught them the importance of communication. For Meyer, it has also been an exercise in giving God control over their lives. After praying and placing their plans in God’s hands, they were able to discern the best option for their situation.

To allow others to participate in the wedding it will be livestreamed.

The couple was a bit disappointed they couldn’t celebrate in a style similar to two of Sordelet’s brothers who married last year, but they see the greater importance of joining their lives in the eyes of God. For the big day, Gwen has no expectations besides becoming husband and wife. “We’re getting married, and that’s what matters at the end of the day.”