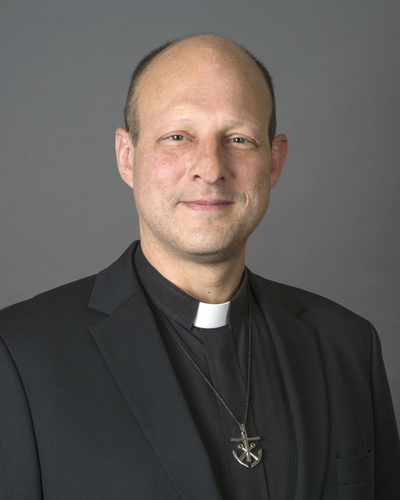 The Holy Cross and University of Notre Dame community suffered a loss Saturday, June 6, when Father David Scheidler, CSC, passed away at a hospital in Chicago where he was undergoing treatment after a bone marrow transplant.

Father Scheidler’s involvement at the university went deep. He was a graduate of Notre Dame, previous associate rector for the basilica and had been serving as pastor of Sacred Heart Parish for the past two years.

Father Scheidler was raised in Indianapolis as the second-oldest child of Dr. James and Maria Scheidler. Maria hails from Mexico City, so the children were raised in a bilingual family. After graduating from Cathedral High School in Indianapolis, he went on to major in both history and communications as well as theater at the University of Notre Dame, graduating in 1987. From there, he went on to study as a Holy Cross seminarian and was ordained in 1994.

As a Holy Cross priest, Father Scheidler served in many different capacities throughout the country. He worked in Goodyear, Arizona, and Niles, Illinois, for a time and also in Monterey, Mexico, for four years. He was assigned to St. Adalbert and St. Casimir parishes in South Bend as associate pastor from 2007-10. Yet, he always seemed to return to his Notre Dame roots.

He was appointed rector of St. Edward’s Hall and chaplain of the Notre Dame Folk Choir. As associate rector of the basilica, he offered his support to the Campus Ministry department, aiding in various projects. At the time of his passing, Sacred Heart Parish celebrated Mass regularly in the crypt of the basilica.

He has three younger brothers and four younger sisters, 44 nieces and nephews and three grandnephews.

A funeral for Father Scheidler is planned for Friday, June 12 at the basilica. Because of COVID-19 restrictions, it has been limited to family and Holy Cross religious. The Mass will be livestreamed through Notre Dame’s Campus Ministry.

Editor’s note: This article was edited on 6/10/20 to correct errors in the third paragraph.