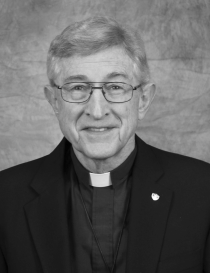 After 50 years of serving God’s people as a Holy Cross priest, Father Tom Zurcher, CSC, is right back where he started, at Holy Cross Parish in South Bend. That is where he was assigned as a deacon in 1971 and spent the first three years of his priesthood. Although he continues to reside at Our Lady of Fatima on the Notre Dame campus, Father Zurcher is enthusiastic about the opportunity to do parish ministry again.

He keeps reminding the pastor, Father Jim Fenstermaker, CSC, that the assignment he accepted last March is part-time, but that doesn’t stop him from frequently celebrating the sacraments, building relationships, visiting the sick and even creating an art and environment team with parishioners eager to put their expertise to work beautifying the space where they worship. He’s also grateful to be involved with a bilingual school where each grade has both a traditional and a Spanish immersion classroom. There he can keep practicing his Spanish and help those from different cultures share their gifts with each other.

Born in Michigan’s Upper Peninsula and raised in Eau Claire, Wisconsin, Father Zurcher had four younger siblings – two brothers and two sisters. His family was active in St. Patrick Church, and he served Mass both there and for the Benedictine sisters in a nearby priory. He was educated entirely in Catholic schools, avidly read Catholic Boy from Ave Maria Press and applied only to the University of Notre Dame.

By the time he finished high school, he knew he wanted to explore the priesthood. He was attracted to a vocation where he could be a “bridge” to help people experience the presence of God in their lives. When he told his parents, they said all they wanted was for him to be happy. However, they advised him to spend two years as an ordinary college student before entering the seminary. So he lived in Keenan Hall his freshman year, where he made lifelong friends, before beginning priestly formation as a sophomore.

Father Zurcher’s bridge-building has taken several forms. Besides parish ministry, he’s helped pastor seminarians, both at Moreau Seminary and in Mexico, as well as serving as Vicar of Priests in Phoenix. He’s also done bilingual, cross-cultural ministry, which he said was excellent preparation for his current assignment.

After his three years as Associate Pastor at Holy Cross, Father Zurcher served as Pastor at St. Patrick in South Bend for six years, calling it “a wonderful experience. They were very patient with me.” He was then sent to St. John Vianney Church in Goodyear, Arizona, where he ministered for nine years before coming back as Superior at Moreau Seminary, Notre Dame, “to help men discern what God is asking of them.” Father Zurcher’s work included the ongoing formation of priests through retreats and seminars.

In Mexico for the next fourteen years, Father Zurcher mentored seminarians, served as director of the Holy Cross community and helped with sacramental ministry in a massive parish spanning five locations. The most challenging and satisfying aspect of his ministry over the years has been “bringing people from different cultures and backgrounds together to share their life of faith so we can move forward together in mission, the mission to build the kingdom of God and change the world in which we live.”

Father Zurcher is happy to be with the people, “responding to their spiritual and human needs.”

Father Zurcher was awed and humbled that more than one person testified to the impact he had on their lives, often through something he said to them on an occasion he no longer remembers. “It was clearly a moment of grace for them, but it wasn’t usually the things I work hard on, like my homilies. God was clearly using me as an instrument.”

“My life has been so blessed because of the way these people live their faith,” Father Zurcher continues. “They motivate me to live my vocation better.”