Especially after 9/11, Daniel Baker wanted to be of service and make a difference in the world. Influenced by the movie “Tears of the Sun,” he enlisted in the U.S. Navy after he graduated from high school in Oakland, California, hoping to become a Navy seal.

He got along well with his comrades, but the mission didn’t live up to his aspirations. So, after much soul-searching, he was honorably discharged in 2007 as a conscientious objector.

Although Baker was baptized Catholic and attended a parochial elementary school, the Church wasn’t central in his upbringing. His spiritual searching included a flirtation with Buddhism, but eventually his godfather helped him reembrace the Catholic Church. 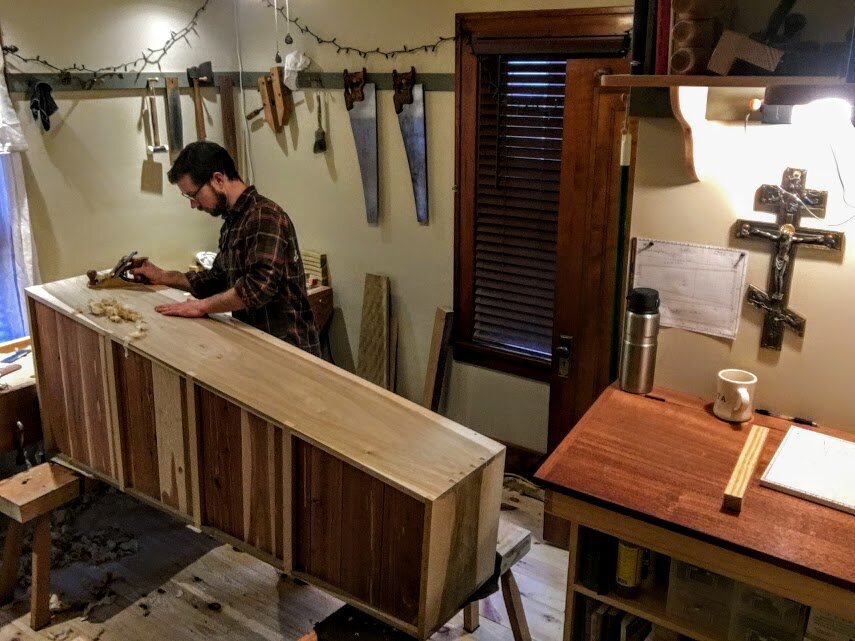 Photos provided by Daniel Baker
After much spiritual searching, Daniel Baker of South Bend felt a career in woodworking was his calling from God. Today he makes a living by sharing his craftsmanship in furniture.

A conference of the Catholic Peace Fellowship brought him into contact with the St. Peter Claver Catholic Worker community in South Bend. He eventually moved into Catholic Worker household so he could live out his faith in practical ways, among the poor.

“My hero changed from Bruce Willis to Mother Teresa,” he chuckled.

Baker had also spent some time in seminary, first with the Capuchins and then in the Diocese of Oakland. Eventually he discerned a different direction. On Aug. 8, at St. Matthew Cathedral, he and Sarah Joyce were married. In her work as senior office coordinator at the University of Notre Dame’s Keough School of Global Affairs, Sarah exercises the gift of bringing people together to create community.

The Bakers live in a neighborhood with several other couples who take their faith seriously. Besides Baker’s workshop in the back of his home, his neighbors Shawn and Stephanie Storer run an urban farm.

In the midst of his spiritual searching, Baker also thought he saw a woodworking career as a calling from God, the one Who gives us all talents and deep desires so His children can work with Him as co-creators. As a boy, however, he had no success using his grandfather’s saw; in retrospect, he said, it was too dull. In high school he turned his attention to building up his physical strength and fixing up cars, but carpentry remained attractive and Baker often earned money by doing remodeling jobs. Eventually, he was able to purchase a set of classic woodworking tools. 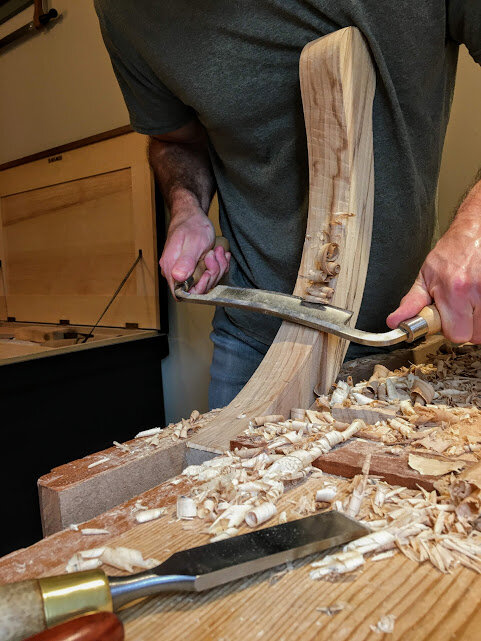 Baker prefers to craft using hand tools, a skill he learned using a combination of 18th-century French books and 21st-century videos. He has also begun creating a line of caskets, a venture he named “Totus Tuus,” the motto of Pope St. John Paul II.

Jeffrey Keating, whom he met through the Catholic Worker community, expressed a willingness to take him on as an apprentice in Colorado Springs, where Keating builds furniture, especially for churches. What Baker learned in his six months there was invaluable. However, in the course of that apprenticeship Baker said he realized that his deep desire was to work with hand tools, not power tools. So, he began teaching himself, using a combination of 18th-century French books and 21st-century videos.

Ideally, he loves to craft chairs and other items from logs while they’re still green, rather than starting with finished boards. His favorite wood is oak, but he’s happy to accommodate his customers’ preferences. His favorite piece? The one he’s working on currently, he said.

Each creation incorporates more skill than the one before it. He usually builds “vernacular furniture,” furniture for everyday use like tables, desks and shelves. 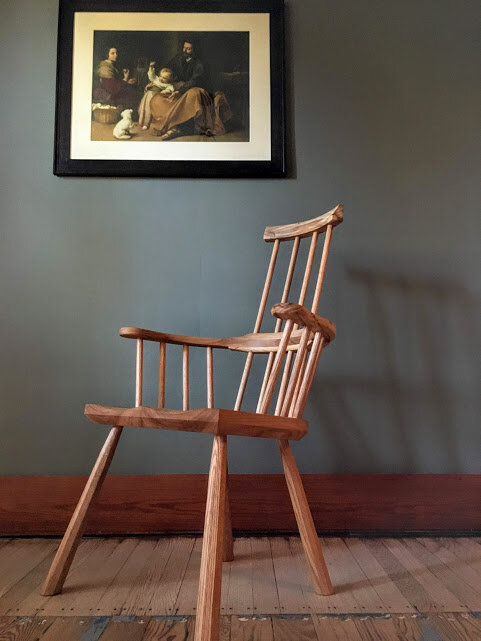 Like Thomas Merton, Baker admires the work of the Shakers, who tried to craft chairs “so sturdy and elegant an angel might come light on one at any time.” Baker sees a direct connection between the work Jesus did in Joseph’s Nazareth workshop and crafting furniture durable and beautiful enough to be used in the new Jerusalem all Christians are engaged in building.

Using hand tools to craft items from wood is slow, painstaking work that necessitates long days. He noted that it’s also tricky to set prices high enough to support a family without making them unaffordable.

He loves to share what he’s learning with others, like high school students who recently had a summer session at Holy Cross College. Baker has even taught woodworking to 3- to 6-year-old students at St. Joseph Montessori School.

Because his work is quiet, Baker can pray and listen to books on tape as he labors. He recently also recently completed his undergraduate degree from Holy Cross College in liberal studies, with strong encouragement from the college’s senior vice president, Michael Griffin, who invited him to that pivotal Catholic Peace Fellowship conference. 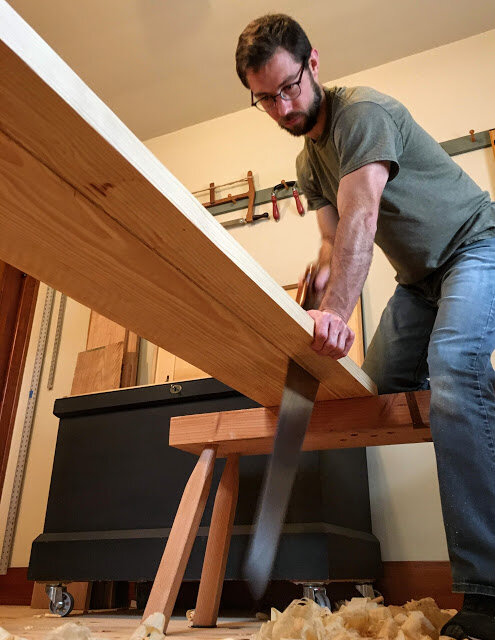 Among the special items that the spiritually led woodworker fashions are caskets. Seeking a name for that line a while back, he hit upon “Totus Tuus,” the motto of Pope St. John Paul II. It means, “I am completely yours.”

That choice was strikingly confirmed when Baker had the great honor recently of crafting a poplar coffin for Griffin’s wife, Catherine, who passed away earlier this year. When Catherine was placed in Baker’s creation for her services, she was wearing a shirt that said “Totus Tuus.”