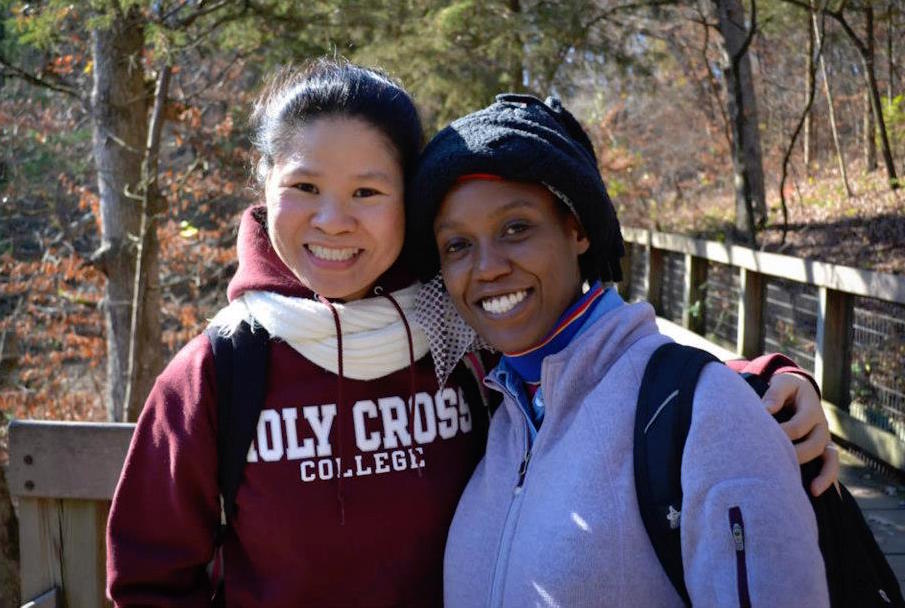 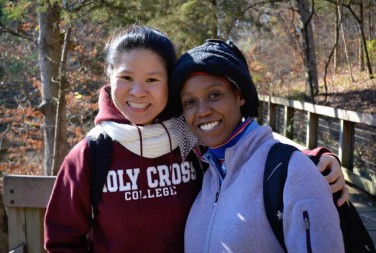 Besides studying, Sister Kim, OP, left, takes time to enjoy the beauty of God’s creation in America. She intends to return to her native Vietnam after finishing a master’s degree in divinity at the University of Notre Dame, to share what she has learned. She is pictured with a fellow religious from Uganda.

“My family was the only family area in that area that was Catholic.”

These are the words Sister Kim, a Dominican religious from Vietnam. Currently a master of divinity student at the University of Notre Dame, Sister Kim plans to bring the theology she has learned back to Vietnam to work toward a country that is freely religious and where the dignity of women is upheld.

She was born in 1969 in North Vietnam, where her communist surroundings limited her and her family’s ability to openly practice religion. At the time, the Catholic Church was struggling to survive. In 1954 the Council of Geneva had divided Vietnam into northern and southern zones, and Catholicism was persecuted in North Vietnam.

Sister Kim grew up in a large city near Queen of the Rosary Cathedral in Haiphong. The cathedral had the only two practicing Catholic clergy, the bishop and an elderly priest. In 1954, with the impending advent of communism, nearly all priests fled to the South. Seminaries closed and Catholics in the villages far from the cathedral could not attend Mass or receive the sacraments. Additionally, Catholics could only work manual labor jobs. Religious discrimination was everywhere.

“I went to a public school where all my classmates were non-Christian,” she recalled. “Because my family was practicing Catholics, we were isolated among our friends and neighbors. We were not allowed to go to University like everybody else, even though we were very good students.”

It was not until 1995 that Sister Kim was able to follow her vocation of becoming a religious, entering the Dominican Sisters of St. Rosa of Lima in South Vietnam. Later, in 2005, the sisters were welcomed into North Vietnam.

Since becoming a religious — amid teaching, becoming a principal at a school for young children and studying — Sister Kim has come to understand her vocation as promoting the inherent dignity of women, as well as learning theology and spreading the truth of the Catholic Church in Vietnam.

“Women in the rural village work with their parents starting at a very early age, even as early as four,” she shared. “Women raised in the villages do not have a childhood: They do not hope for a happy life. Very few are educated beyond elementary school, as education costs money and is seen as unnecessary.” Instead, women are expected to be wives and mothers. Often married young, by the time a woman is in her early 20s she will usually have several children. And while motherhood is a beautiful gift from God, it can be distorted when promoted at the expense of recognizing a woman’s capability to contribute to society in broader ways, she said.

Before coming to South Bend to study, Sister Kim started a program called the Foundation for Poor Children and Young Women, which focuses on promoting human dignity — especially that of women. The program hosts workshops for young women, providing them time and space to listen, build community, play games and pray.

Participants are always in different places in their education; often, they are behind. The foundation seeks to inspire them to understand that they do have value and can learn, and connects this to the inherent dignity they have because they were created in the image and likeness of God.

“In Vietnam now, the situation is very complicated,” Sister Kim shared. No longer is the Catholic Church in Vietnam struggling to survive; rather, there is space for growth and development, although still within the confines of what the government will allow. As of 2015, Catholic universities are permitted: The first one opened in Saigon in September.

For Sister Kim, studying at Holy Cross College and the University of Notre Dame has been an invaluable gift, a gift that will continue to grow and flourish as she continues her studies and then returns home. “I have done a lot of ministry in Vietnam, but with the lack of theological education, I did not have the resources to learn new skills.” She left the country to acquire a theological background in hope that others will not have to do the same.

“After I finish my study, I want to go back to Vietnam and spread theology. The government wants us not to think: They want to do the thinking for everyone. When I go back I will have to be really careful. I want them to know I am not a dangerous person. I am not against the government. I am here to promote human dignity, care for the poor, uphold the dignity of women and promote love of God and neighbor so that the Catholic Church in Vietnam can develop.”