BLOOMINGTON, Ind. — There is the black-and-white photograph of the young Dominican priest floating along the Niger River in a canoe in the early 1960s, pointing into the distance, uncertain what awaited him in this vast, mission territory.

There is also the moving story the priest shares about the time he prayed the Stations of the Cross with members of a leper colony.

The photo and the story are all part of the 57 years that Dominican Father Justus Pokrzewinski spent in Nigeria, serving as a missionary bringing the Catholic faith to a people unfamiliar with Jesus. 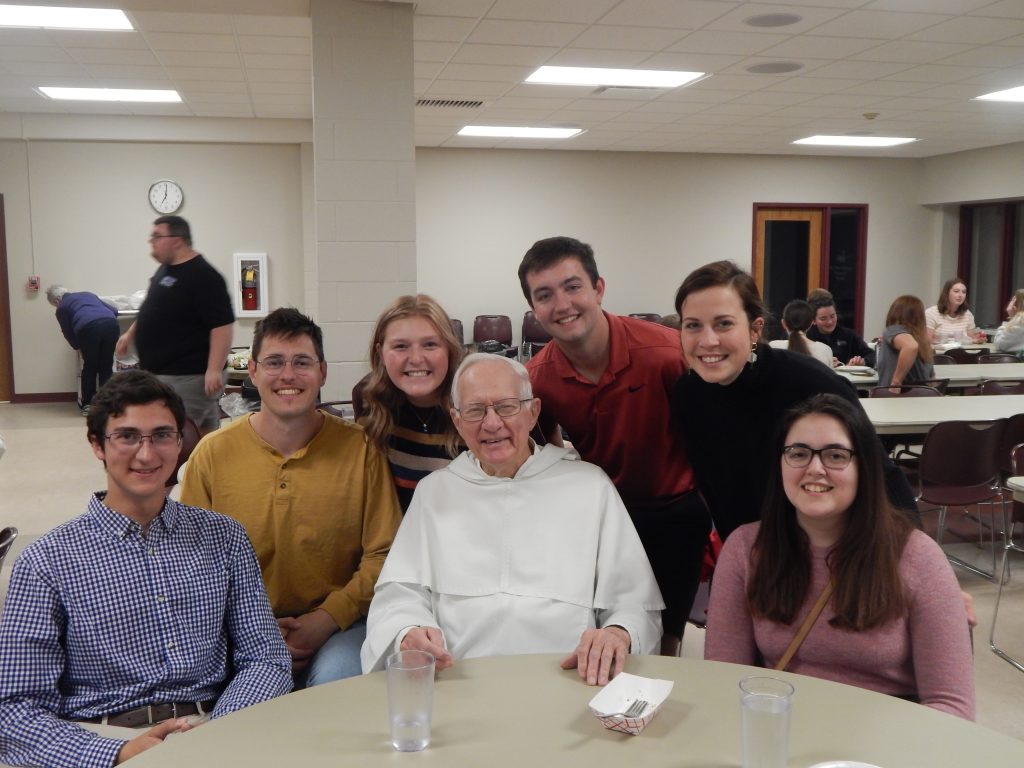 Dominican Father Justus Pokrzewinski enjoys spending time with students on Oct. 16 during a Sunday evening meal at St. Paul Catholic Center on the campus of Indiana University in Bloomington. Pictured, seated, from left, are Jose Kaufmann, Father Justus and Abigail Cerimele. Behind them, from left, are Connor Gorton, Lizzy Hart, Dane Babillis and Elizabeth White. (Photo by Mike Krokos, The Criterion)

Now, after celebrating his 90th birthday on Dec. 10, Father Justus is nearing his fourth year of ministering to college students at the St. Paul Catholic Center on the campus of Indiana University in Bloomington.

Two different worlds, but one common goal for Father Justus: sharing the joy of Jesus.

He continues to strive for that goal after suffering a minor stroke in November of 2020. He assists at the parish as a priest-in-residence, celebrating Mass on every Friday and on some weekends. He also hears confessions and attends many of the parish’s functions, including a Sunday evening meal hosted at St. Paul Catholic Center each week.

He knows many of the students and is especially supportive of the FOCUS (Fellowship of Christian University Students) missionaries, who minister around the campus. And the students love this priest who is known for singing hymns around the parish office and who always takes time to greet everyone who crosses his path.

“He’s a very holy man who brings a lot of joy to everyone,” says Maria Reecer, an IU sophomore who works part time in the parish office and is a member of the parish. “I think he’s a great testament to what faith does for someone when they pursue it throughout their life.” 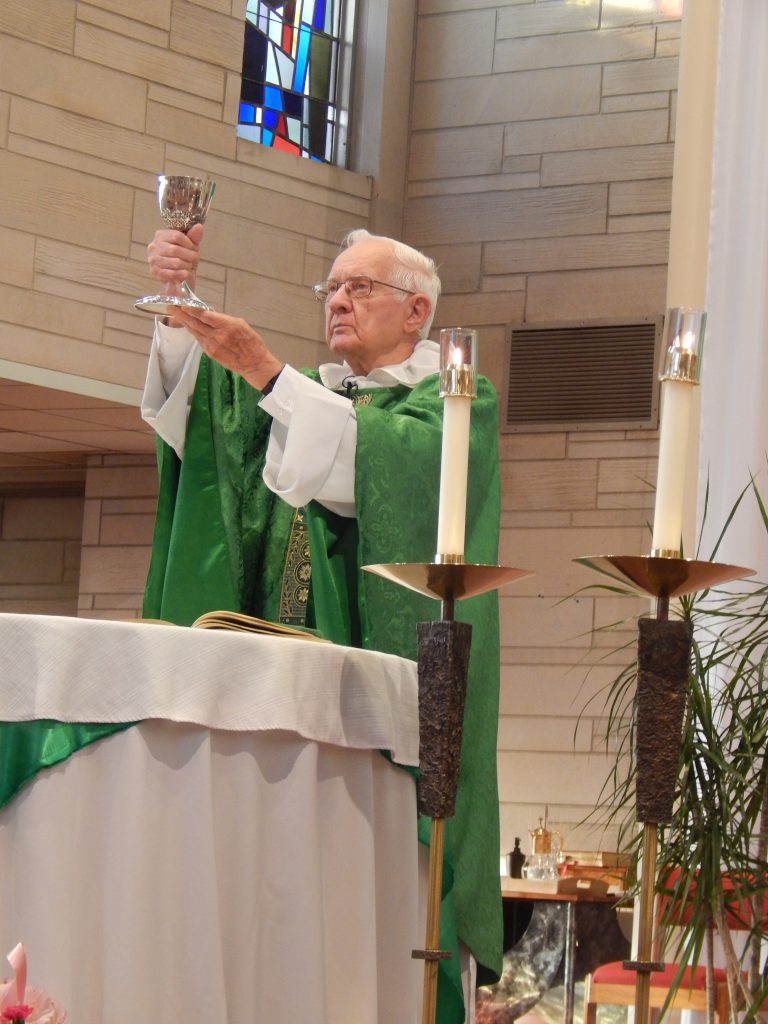 Dominican Father Justus Pokrzewinski elevates a chalice during a Mass on Oct. 16 at St. Paul Catholic Center in Bloomington. (Photo by Mike Krokos, The Criterion)

‘He’s a Big Force of Prayer for the Students’

Elizabeth White, Team Director for FOCUS on the IU campus, also cites Father Justus’ joy when discussing his presence at the parish. She also talks about his reverence when he celebrates Mass.

“His love for the Eucharist and the Lord is so apparent,” she notes. “And he always makes it a point to pray for us missionaries, which is an incredible gift.”

Father Justus also possesses the gift of remembering everyone he meets, White says, and an unwavering commitment to praying for those people every day.

“He’s a big force of prayer for the students,” she says. “And just the way he remembers is very intentional about each student he interacts with, and it’s something I very much admire and that has definitely rubbed off.”

Father Justus’ missionary work in Nigeria also inspires White and her FOCUS colleagues. He spoke to the group about his experiences, and they left the meeting eager to continue their outreach.

“I remember us leaving the class feeling very invigorated, thinking, ‘If this man can go into dangerous territory and spread Jesus, then we can go onto a college campus and share about Jesus,’” White says.

In both Bloomington and Nigeria, Father Justus views missionary work from a similar perspective.

“The missionary progress depends on God’s grace, on the gift Jesus gave us in the holy Eucharist, as the memorial of His Passion, death, and resurrection, on the Holy Spirit, and also on Our Lady, Queen of the Apostles,” he notes. “All the glory of any success goes to God.”

‘Everything Flows from That’

Still, his missionary work in Nigeria was a world away from his youth in Chicago, where religious life was present in his parish and early education. He graduated from St. Stanislaus Kostka grade school, where the parish was staffed by the Resurrectionist Fathers and the school by the School Sisters of Notre Dame. His family also had strong Catholic roots that went back to Poland.

“I give thanks to almighty God for the gift of my life and my Catholic faith, and my parents’ Catholic faith. Everything flows from that,” Father Justus said. “All the sacraments — from Baptism, Penance, Holy Communion, Confirmation — led me to the Dominican order and the priesthood.”

After being ordained on June 4, 1960, he was assigned to minister in Nigeria in October of the following year.

‘This is a Great Gift, but You’re Going to Suffer for It’

His Dominican order — whose charism is preaching for the salvation of souls — had been invited to minister in the west African country in 1951. They were given two apostolates: a parish in Lagos and the prefecture of Sokoto in northern Nigeria, which was to be developed into a diocese.

“Our job [in Sokoto] was to build the diocese up and to hand it over to the diocesan priests,” he says.

The Dominicans did their best to learn Hausa, which was the main language. They also tried to build bridges with the Muslims, who controlled much of the region. The Muslims told the Dominicans they could minister in the region if they built a hospital, which the order did. Dominican sisters from Kansas operated it and two other clinics.

“Lay missionaries who were nurses helped the sisters run these places,” Father Justus notes. “It was a very Dominican thing, with the priests and the Dominican sisters and the lay missionary nurses. The work went well.”

As missionary disciples, the Dominicans were charged with spreading the Gospel and introducing the Nigerian people to Jesus Christ. Father Justus says one breakthrough occurred with a small group who spoke Hausa but were not Muslim.

“How did we find them? … They were different from the Muslims because they drank beer,” he says with a laugh. “That was one way to meet them.

“We saw it was important to [minister to] them. Most of the Christians were coming from the south. … So, we succeeded in that area a bit.”

When he baptized children, the priest told their families, “This is a great gift, but you’re going to suffer for it,” referring to the strong Muslim presence in that area of Nigeria. And that suffering continues for many Christians there today.

During his nearly 20 years in the Sokoto diocese, Father Justus worked in parishes, viewing his primary mission as evangelization. The Dominicans were building parishes with mostly people from the south and trying to introduce the indigenous people in the north to the Catholic faith.

“In the north, no one had ever preached about Jesus,” he says. “It’s wonderful to preach to people who never heard the Good News.”

‘That is Jesus, the Body of Christ’

In 1980, Father Justus moved to the south and ministered in the Ibadan archdiocese. His 37 years there included mission work in Ibadan, Lago, and Agbor-Obi.

He served in various leadership roles during that time with the Dominican order and also as a pastor. During visits to villages, he took note of how important native catechists were to introducing and passing on the faith.

“They were really our right hand. They knew the language, and they knew English, and they would often interpret for us. There are many dialects in Nigeria,” he says. “There are maybe 20 languages, but each one of them had different dialects, almost up to 200 if you counted them all.”

One story revealed how a catechist’s work offered an example of faith in action.

“We were getting converts, and we told our people, ‘The tabernacle, that is Jesus, the body of Christ. He’s in there,’” Father Justus recalls. “So, they would tell their friends.

“One time, a young man — not a catechumen yet — he asked me in the Hausa language … ‘Is God in that box’ [the tabernacle]?”

“I said, ‘Yes, that’s the tabernacle. Yes, He is.’ … That was kind of a thrill to see how they were sharing the faith, and the way he put the question.”

Promoting priestly and religious vocations was also an important part of Father Justus’ mission. Reflecting on trying to plant seeds for vocations, Father Justus admits, “It was slow going at first.”

“There were nine [Dominicans] ordained priests this year, and eight deacons, all native Nigerians. We’re happy with that,” Father Justus notes. “Nigeria is rich in vocations.”

Near a parish in Agbor-Obi where Father Justus ministered for two years was a leper colony that a group of religious sisters operated. One day, they asked the priest to celebrate a Mass and participate in the Stations of the Cross afterward.

“As we would kneel down [while praying the Stations] … there was this leper ahead of me, and when he knelt down, there was his leg, all eaten up from leprosy. I felt sorry for him, but then it struck me, this guy was kneeling and rising faster than all of us. … It then struck me: there is a guy, a leper, and he is just thrilled to be saying the Stations of the Cross. He just saw what Jesus did [as we reflected on the stations]. … We don’t like to suffer, and here is this guy doing this.”

Now, Father Justus’ spirit has an impact on the people he meets at IU.

‘He’s Just So Focused on the Lord’

“His joy, his love of the priesthood, his love of preaching the Gospel, of just bringing Jesus to people, that’s inspirational,” Father Hyde says. “And you pair that with the fact that he was [a missionary for] 57 years in Nigeria, so he’s walking the walk, and talking the talk. There’s such a beautiful integrity to his life. He’s just so focused on the Lord.”

When discussing Father Justus and his priestly ministry, the pastor also cites a motto that St. Thomas Aquinas gave to the Dominican order: to give to others what’s been contemplated.

“He just exudes that,” says Father Hyde. “In his life, in his prayer, he’s talking to Jesus, he’s listening to Jesus, and in his ministry, he just desires to share that with people.

“He’s just someone who loves Jesus and wants to share that with you and just engage in your life.”

Even in his ministry at IU, Father Justus keeps the people of Nigeria close to his heart. “I received so much from the Catholics in Nigeria and from those who were accepting the Catholic faith.”

But with sadness, he also cites “the serious sufferings of the Catholics and other Christians in some parts of northern Nigeria.

“Many have died, not only from Boko Haram fanatics, but many have died at the hands of some Fulani cattle herdsmen,” the priest said. “Government protection is needed for the Catholics. There is a great need to stop these persecutions. The faith of the Catholic people is strong, but they need our prayers.”