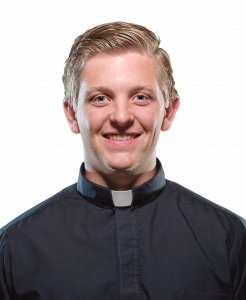 There is a saying that every saint has a past, and deacon candidate Jacob Schneider’s past includes his years in a fraternity at the University of Toledo. “I enjoyed all aspects of fraternity life,” he said with a laugh. Yet it was also during his college years when he examined the possible calling to the priesthood that had been with him for some years prior.

Schneider grew up in Fort Wayne, the oldest of three children born to Andy and Tina and a member of St. Charles Borromeo Parish. “I feel like I had a pretty good life growing up, I was really blessed,” he said.

Even though he describes his family as devout in their Catholic faith, his own was “a little rocky in college.” He had considered seminary after graduating from Bishop Dwenger High School, but after speaking with Father Jacob Meyer, the school chaplain at the time, he felt that he needed to go to college instead.

By his senior year, he had become more invested in his faith, had a good spiritual director and found himself deciding between the priesthood or going to graduate school to become a physical therapist. His decision was complicated by a potential relationship with a young woman, which he thought could have been his calling to the married life. Visiting his friend and then-seminarian Logan Parrish at Mount St. Mary’s “had a huge impact.” Finally, he decided to apply, though he also continued with his graduate school plans, unsure if he would be accepted into seminary.

He met with Bishop Kevin C. Rhoades on May 5 and graduated on May 7. Still undecided on his future path, he prepared to begin graduate school on May 22. Asking the bishop for another week to pray about his decision, he spent that time calling family, friends, Father Meyer and eventually spoke to God.

At a 24-hour Eucharistic Adoration chapel, Schneider finally had his answer. “I remember walking away from it and I had two graces,” he said. The first was a feeling that no matter what he chose, God would be with him throughout his life. Second, God showed him all the signs He had given Schneider through the years – as a five-year-old saying he wanted to be a priest, choosing St. John Vianney, the patron saint of parish priests, as his confirmation saint, etc.

With a call to Father Andrew Budzinski, it was done. “After that, everything else just falls, because it’s like, I’ve already committed, I can’t back out,” he said. When he contacted both his summer boss and the person in charge of the graduate school program, he found out that both women were Catholic – which he did not know prior – and they were happy for him in his choice. “That is of God, I had no idea it would work so well.”

He has not had any regrets about his decision. “This life excites me. The thought of doing ministry gives me joy. The thought of being a priest and having this intimate relationship with Christ, just all those things.”

All through his life, particularly through his decision-making process, his father, Andy, has had a strong influence on him. Schneider describes him as a “really good father” and expects that his priesthood will emulate Andy’s fatherhood. “He kind of taught me, he revealed to me God the Father through my own father. That’s just the image I have.”

Andy is not the only fatherly role model in Schneider’s life. Four priests – three from the diocese and one from Toledo – influenced his vocational path: the aforementioned Father Meyer; Father Tony Steinacker, who served at St. Charles Borromeo when Schneider was young; Monsignor Michael Heintz, who baptized him as an infant and now serves as his spiritual director at the seminary and Father Phil Smith, who advised him at the University of Toledo.

As ordination draws nigh, Schneider finds himself growing more excited about his ordination, ready to commit to the future God has laid out for him. “I totally just want to give myself to this.”

What is he most ready for? “I’m actually looking forward to experiencing the Mass in a different way,” he shared. Being near to the Eucharist, having the privilege of elevating the chalice as a deacon, will allow him to place his personal intentions beside the blood of Christ in a special manner. “And eventually praying it as a priest, I can’t even imagine what that’s like.”

Schneider will give his first homily after ordination at St. Monica in Mishawaka on Saturday evening, then give homilies at his home parish of St. Charles Borromeo on Sunday morning.