At a May 29 press conference in Pensacola, Fla., where he is the bishop-designate, the first question Father William Wack, CSC, fielded was, “Will you be the first bishop from South Bend?”

Although other members of the Congregation of Holy Cross are bishops, this son of Christ the King Parish probably holds the distinction of being the first who grew up in South Bend. As Bishop-designate Wack put it, “This is an honor for all of us: my parish, my diocese, my order, Notre Dame, and my wonderful family. They all had a role in making me who I am.”

He ventured a guess that he’s the first bishop to have ever graduated from LaSalle High School, although three other Holy Cross priests also claim that alma mater.

The single word friends and family members use to describe the priest is “joyful.” Again and again Bishop-designate Wack exclaims, “I love being a priest!” In fact, when the papal nuncio, Archbishop Christophe Pierre, called with the news would change his life, the bishop-designate said he made sure he wouldn’t have to give up his priestly ministry. He observed that in appointing bishops, Pope Francis isn’t looking for experienced administrators, but rather men who love being pastors, men with direct experience serving the poor. 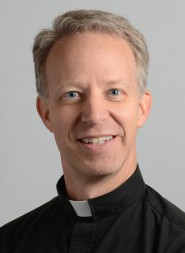 Pope Francis has named Holy Cross priest Father William A. Wack, pastor of St. Ignatius Martyr Parish in Austin, Texas, to be the bishop of Pensacola-Tallahassee, Fla. He succeeds Bishop Gregory L. Parkes, who was named last November to head the Diocese of St. Petersburg.

Bishop-designate Wack is the ninth of 10 children: two daughters followed by eight sons. Their mother, Alice, always told them that mothers of priests go straight to heaven.

After Jim and Alice built a house near Christ the King, all the boys served at the altar and helped out at the rectory, answering the phone and even doing secretarial work. Oldest son Jim did consider the priesthood during high school, but Alice had to wait until “Billy” before she got her first priest in the family. “Then (son) Neil was a bonus,” said Jim Sr.

Jim Sr. had been active in his parish in Noblesville for 30 years, teaching confirmation classes and leading youth Bible studies. Another of the couple’s sons, Kevin, spent time in seminary before earning a law degree and is now a hospital ethicist in Atlanta. Youngest daughter Emily Vizard just graduated from Holy Cross College; son Michael and his family are active at Sacred Heart Parish in Warsaw.

One of Bishop-designate Wack’s sisters, Mary Gurr, remembered how both he and Father Neil liked to serve morning Mass at Christ the King when they were young. When they went to bed, they often left a note on the table asking whether they could go to the early Mass, leaving “yes” and “no” boxes for their parents to check. On the weekends their Dad served right along with them.

When William was in high school and Neil in grade school, they biked over to Moreau Seminary to chat with the vocations director. He mostly talked with William, who wound up entering Old College as a college freshman; but at the end of the interview, Father Andre turned to Neil and asked, “What about you?” He replied: “No way, that’s not going to happen.” He went to Purdue University and worked as a computer consultant for four years before entering the seminary, later stating that a big factor in changing his mind was the joyful witness of then-Father William, who was an associate pastor in Colorado Springs. “He listened to me and gave me space,” said Father Neil. “I kept waiting for his joy at being a priest to diminish, but it never passed, despite all his responsibilities. He’s a huge reason why I entered the Congregation of Holy Cross. It’s neat to be brother priests and religious, as well as blood brothers.”

James Sr., a family doctor, and Alice, a nurse who worked in his office after the children were older, made sure the whole family prayed the rosary after dinner every night, along with any neighborhood children who came in when they called “Rosary!” Each child led half a decade, “so they had to pay attention,” said Alice. Mary said seeing her father come in from work, wash his hands and pull his rosary out of his pocket taught her that real men can be very religious.

“We were raised in the most incredible family,” she said. “Besides the gift of life, our parents gave us the gift of Catholicism. I absolutely love our faith. We all wore miraculous medals: Our mother joked that the bottom of the lake was covered with the ones we kept losing.

“When I see my brothers concelebrating Mass,” she continued, “an indescribable joy fills my heart, knowing what they’re holding in their hands. They take their vows seriously, but their joy attracts young people, who learn that you don’t have to be old and stodgy to be a priest. Chastity isn’t something they’ve chosen because they don’t want to get married; it’s a sacrifice they make daily for God.

“Bill also says he finds the vow of poverty very freeing. He has very few possessions, but you have to be careful not to admire something on his wall; he’ll take it down and hand it to you.”

Ordained in 1994, Bishop-designate William visited Father Stan Rdzok, CSC, former pastor at Christ the King, shortly afterward for permission to adopt his priestly motto. Father Rdzok replied, “Gladly,” so he chose a motto that perfectly combines his serious and light-hearted side: “Working to Beat Hell.”

The new priest served in Colorado Springs, for some of those years as associate director of vocations — a post Father Neil now holds. For six years he directed Andre House in Phoenix, Ariz., a center for the homeless. Since 2008 he has been pastor of St. Ignatius Martyr Church in Austin, Texas, founded as a Holy Cross parish because of its proximity to St. Edward’s University. Although he had never been to Texas before that assignment, Bishop-designate Wack became an “orange” Texas fan and developed a taste for barbecue and for wearing cowboy boots. He expects to adapt just as well to northwest Florida.

Bishop-designate Wack has worked closely with Austin Bishop Joe Vasquez as dean and member of the diocesan advisory school board and presbyteral council. “Father Wack is an exemplary priest who is well-respected by his brother priests and loved by those he serves,” said Bishop Vasquez. “As the people of Pensacola-Tallahassee come to know him, they will see his love for the church and his desire to serve his flock with warmth and compassion.”

Bishop-designate Wack knows the bishop must be a leader, not just a companion; someone who can set a vision and work through any difficulties that arise. Although his new diocese has only 67,000 Catholics, he hopes to foster pride that will help make it the best diocese in Florida.

Bishop-designate Wack’s consecration and installation as the bishop of the Diocese of Pensacola-Tallahassee has been set for Aug. 22. One of his great-nieces will be only four weeks old then, but the entire family plans to be on hand. Before that time, he is looking forward to a canonical five-day retreat, as well as a June retreat that will enable him to connect with his brother Holy Cross priests.