This past November, over 1,000 Catholics and Jews of Fort Wayne, Indiana, gathered to pray together at St. Elizabeth Ann Seton Church in a beautiful service during the visit to our community of the “Violins of Hope” — violins that were played by Jewish prisoners at concentrations camps during the Holocaust. Our praying the psalms together and listening to the violins and our communities’ choirs brought us tears of both sadness and joy — sadness at the horrors of the Holocaust, and joy at the love we share as brothers and sisters, drawn together by a common spiritual patrimony. 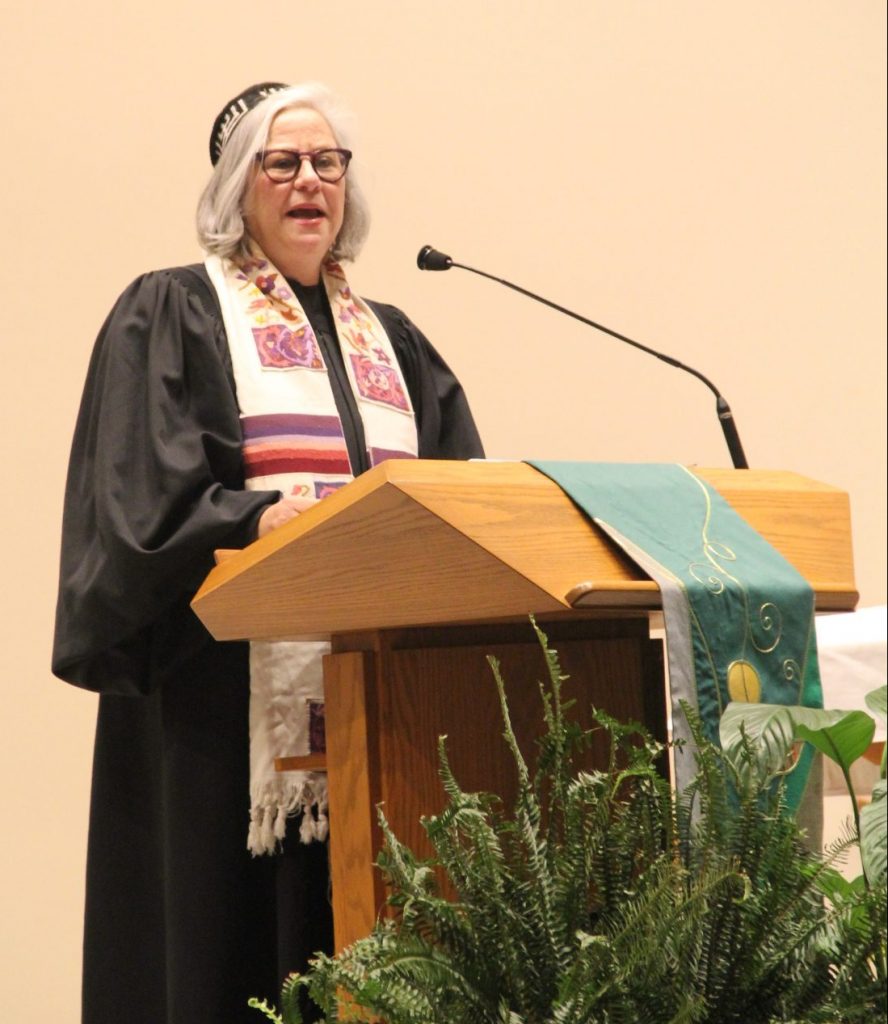 We recognize that the anti-Judaism and anti-Semitism of past centuries contributed to the rise of the Nazi project to exterminate Jews. Learning from the tragedy of the Holocaust, the Church deplored in her 1965 landmark document, Nostra Aetate (In Our Time), “all hatreds, persecutions, displays of antisemitism leveled at any time or from any source against the Jews.” This important statement from the Second Vatican Council also affirmed that “the Jews should not be spoken of as rejected or accursed as if this followed from holy Scripture. Consequently, all must take care, lest in catechizing or in preaching the Word of God, they teach anything which is not in accord with the truth of the Gospel message or the spirit of Christ” (NA 4). 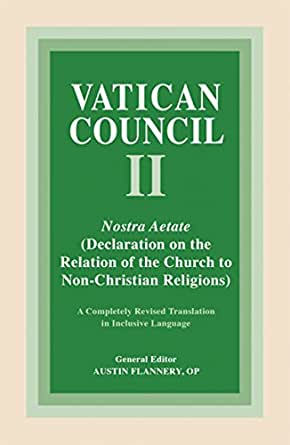 Unfortunately, there has been a rise in recent years of anti-Jewish and anti-Semitic rhetoric in our society. Further, there have been incidents of violence incited by hateful speech about Jews. The Church has firmly condemned such rhetoric and violence. Those who speak of Jews as our enemies are mistaken. Pope St. Paul VI, Pope St. John Paul II, Pope Benedict XVI, and Pope Francis have consistently referred to our Jewish brothers and sisters as “friends” whom we love and esteem, not as enemies or adversaries whom we reject. Language matters. Language that incites animosity is harmful. This is not to say that there are not disagreements between Christians and Jews about matters of faith, but such disagreements need not imply hostility. The only truly Christian attitude towards the Jewish people is an attitude of respect, esteem, and love. As members of God’s family, we are bound to one another in His plan of salvation.

Here is what the Catechism of the Catholic Church teaches as the authentic doctrine of our faith regarding the relationship of the Church with the Jewish people:

When she delves into her own mystery, the Church, the People of God in the New Covenant, discovers her link with the Jewish people, ‘the first to hear the Word of God.’  The Jewish faith, unlike other non-Christian religions, is already a response to God’s revelation in the Old Testament. To the Jews ‘belong the sonship, the glory, the covenants, the giving of the law, the worship, and the promises; to them belong the patriarchs, and of their race, according to the flesh, is the Christ’ (Romans 9:4-5), ‘for the gifts and the call of God are irrevocable’ (Romans 11:29). (CCC 839)

We must never forget that Judaism was the religion of Jesus, Mary and Joseph, the apostles, and of the early disciples who spread the good news of Christ to the world (cf. NA 4). The four gospels were written by Jews, about a Jew and originally for a Jewish readership. The Jewish people, then, are Jesus’ own family. 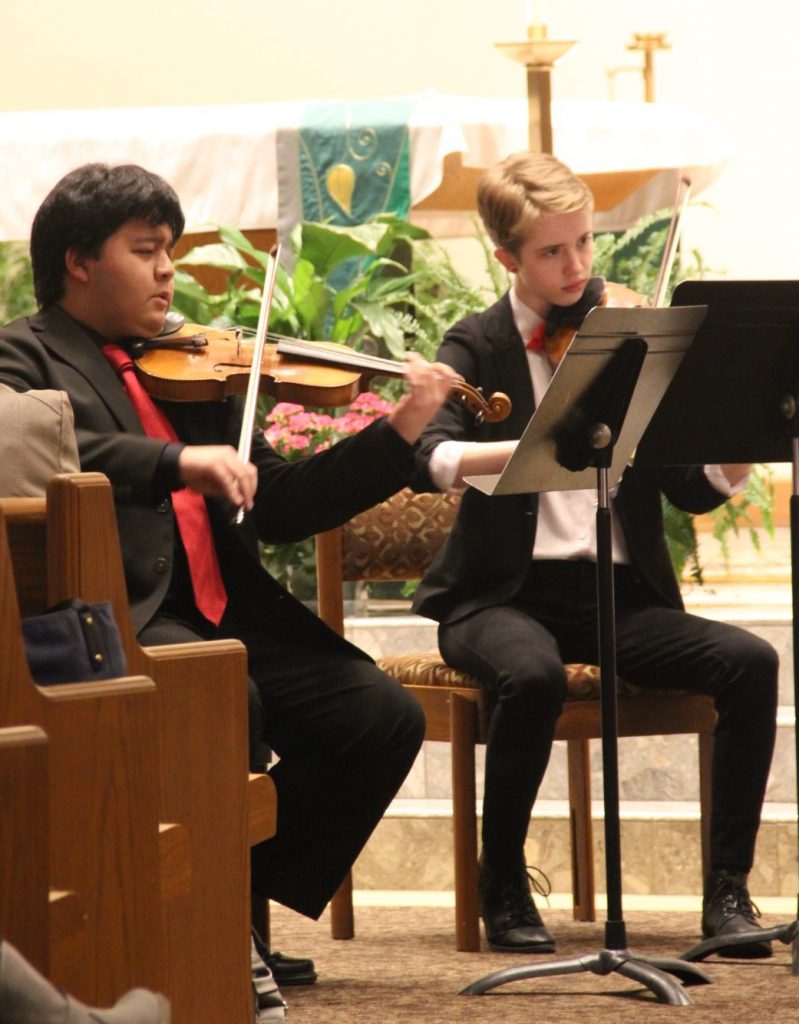 Jennifer Barton
Students use the historic violins to provide musical accompaniment during the interfaith service.

Though many Jews did not accept the Gospel or opposed its spreading, they were not thereby rejected by God. In this regard, the Council Fathers stated that “even so, the apostle Paul maintains that the Jews remain very dear to God, for the sake of the patriarchs, since God does not take back the gifts he bestowed or the choice he made” (NA 4).

Very importantly, the Second Vatican Council rejected the accusation that Jews were “Christ-killers,” a charge that through the centuries resulted in anti-Jewish hatred and persecution. The Council Fathers stated the following: “Even though the Jewish authorities and those who followed their lead pressed for the death of Christ (cf. John 19:6), neither all Jews indiscriminately at that time, nor Jews today, can be charged with the crimes committed during his passion” (NA 4). In fact, Church teaching is clear regarding who was responsible for the death of Jesus: it is all of us! The Catechism says: “In her Magisterial teaching of the faith and in the witness of her saints, the Church has never forgotten that ‘sinners were the authors and the ministers of all the sufferings that the divine Redeemer endured’ (NA 4). Taking into account the fact that our sins affect Christ himself, the Church does not hesitate to impute to Christians the gravest responsibility for the torments inflicted upon Jesus, a responsibility with which they have all too often burdened the Jews alone” (CCC 598). 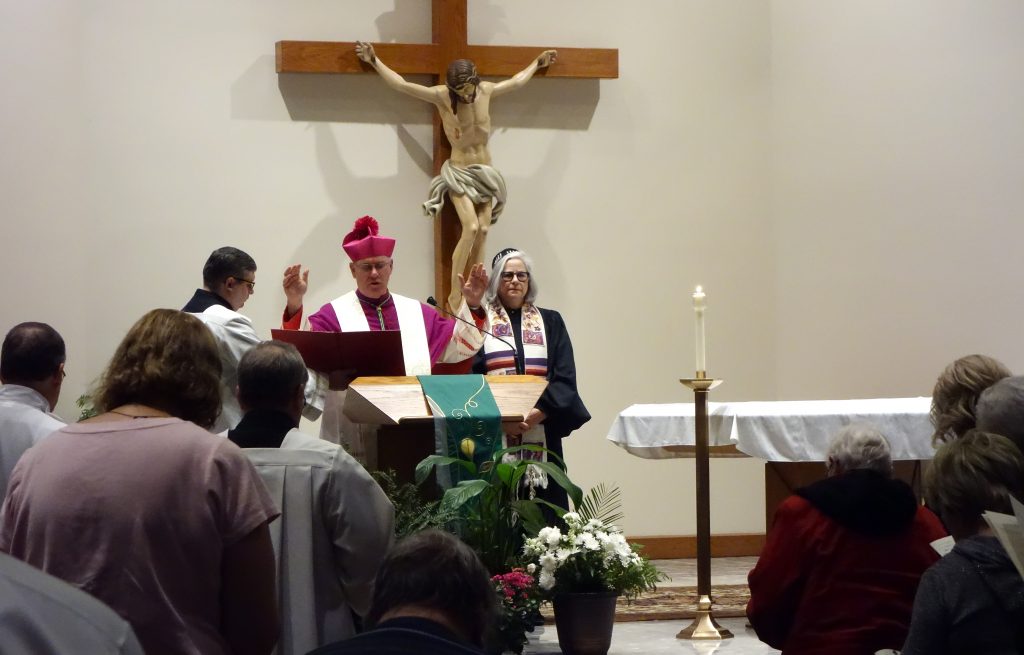 These authoritative statements of the Second Vatican Council have been communicated and expanded upon by all our recent Popes. These teachings are not optional for Catholics but require our consent as true expressions of our faith. Negative language towards Jews as a people, a culture or a religion, is not acceptable. For example, some authors partially quote a few Biblical texts to justify anti-Jewish sentiments — texts that either refer only to certain categories of Jews, or that defend the Christian mission against Jews who originally opposed it. While some of these passages are polemical in tone, they nevertheless do not reflect contempt or hostility for Jews themselves, as the Pontifical Biblical Commission explained in its 2002 statement, “The Jewish People and Their Sacred Scriptures in the Christian Bible.” There, then-Cardinal Joseph Ratzinger emphasized that such texts should not be used as a pretext for anti-Semitic or anti-Jewish contempt. Instead, they need to be interpreted first, in relation to the whole message of the Bible and second, according to their concrete historical context; viz., as growing from within the conflicts between the nascent Church and the broader Jewish community, or as a part of the eventual division between the young Church and Judaism by the time of the Emperor Constantine (314 AD). However, no matter their differences, the parting of ways between Christians and Jews never canceled out the spiritual bond between these two parts of the same family.

Some writers today do not present Jews or Judaism in a respectful or theologically correct manner. The Vatican Commission for Religious Relations with the Jews issued an important 1985 document: “Notes on the Correct Way to Present the Jews and Judaism in Preaching and Catechesis in the Roman Catholic Church.” In that document, the Commission states that “we must rid ourselves… of the traditional idea of a people punished, preserved as a living argument for Christian apologetic. It remains a chosen people […] the permanence of Israel is accompanied by a continuous spiritual fecundity.” As a result, the Catholic Church offers no shelter to anti-Jewish bias, regardless of its content or expression. This applies to racist statements against Jews, to anti-Semitism, or to any religious opinion that denigrates Jews or Judaism.

It was Pope St. John Paul II who coined the beautiful expression of our “elder brothers” as he spoke to Jews in the synagogue of Rome on April 13th, 1986. A few years ago, in the same synagogue, Pope Francis recalled this very phrase and again told the Jewish community there: “You are our elder brothers and sisters in the faith.” It was my privilege to echo the teaching of both these popes this past November, when I used the same expression at our service at St. Elizabeth Ann Seton Church.

The Jews are not our enemies. We are bound together with them in friendship as brothers and sisters in the family of God. In the synagogue of Rome in 2016, Pope Francis spoke of the spiritual bond between Jews and Christians and the importance of fostering an authentic friendship. He said: “In interreligious dialogue it is fundamental that we encounter each other as brothers and sisters before our Creator and that we praise him: and that we respect and appreciate each other and try to cooperate.” This is especially important as the Church and the Jewish communities continue to address religious and ethical questions that both face in a world intent upon challenging religious freedom. Jews and Christians can impact society profoundly when they stand together on key issues such as the sanctity of human life, immigration reform, health care, human trafficking and world peace.

Even as we Catholics profess our belief in Christ as the Messiah, the Son of God, and Savior of the world, we also recognize God’s unfailing, steadfast love for His chosen people, Israel. In our mission of preaching Christ to the world, we do not dismiss or reject the spiritual treasures of the Jewish people. Also, as Pope St. John Paul II said in Miami in 1987: “Differences in faith should not cause enmity but open up the way of reconciliation, so that in the end ‘God may be all in all’ (1 Corinthians 15:28).” Similarly, Pope Benedict XVI said that in those areas of faith in which we diverge, “we need to show respect and love for one another” (Visit to Synagogue of Cologne, 19 August 2005).

In this age of social media, people read or listen to all kinds of opinions expressed about Judaism and the Jewish people on internet blogs, websites, and the like. Some are filled with false and hateful rhetoric, opposed to the very spirit of Christianity. As Catholics, we must reject any that express, or can lead to, contempt for Jews. It is important that Catholics embrace and follow the message of Nostra Aetate, the authoritative, Conciliar teaching of the Church. Pope St. John Paul II said that it is “a teaching which it is necessary to accept not merely as something fitting, but much more as an expression of the faith, as an inspiration of the Holy Spirit, as a word of the Divine Wisdom” (L’Osservatore Romano, 29 January 1985).

Let us give thanks to God for the growth in trust and friendship established between Catholics and Jews since the Second Vatican Council. May the Lord accompany us on our journey of friendship and bless us with His peace!