BALTIMORE (CNS) – Gathered in Baltimore for their fall general assembly from Nov. 14-17, the U.S. Conference of Catholic Bishops (USCCB) elected new leadership, heard about the crisis in Ukraine, and what migrants face at the U.S. southern border.

They also approved several liturgical items and OK’d the advancement of the sainthood causes of three Catholic women.

The prelates also discussed whether they should update “Forming Consciences for Faithful Citizenship,” their document on the political responsibility of Catholics, issued every four years for the presidential election.

Speaking from the floor, several bishops said it must include what Pope Francis has said on critical issues of the day in his nearly 10 years as the successor to Peter.

But beyond the business agenda the bishops must attend to every year, there was a greater emphasis on prayer throughout their four days together and changes in seating arrangements to promote “fraternal dialogue.”

Each day of the meeting ended with vespers and throughout the plenary, there also was 24-hour Eucharistic Adoration, which was instituted at their 2021 assembly. There were also less formal bishop-media encounters.

Their first public session took place the afternoon of Nov. 15 and opened with an address by Archbishop Christophe Pierre, the papal nuncio, followed by Archbishop José H. Gomez of Los Angeles, the outgoing President of the USCCB.

The nuncio told the bishops that “as we live through a time of accelerated change,” spreading the Gospel message is particularly important.

One way to determine if the Church is following its missionary role is to look at how local churches are functioning as evangelizing communities, something he said is especially evident in the current eucharistic revival in the United States.

In his final presidential address, Archbishop Gomez described images of conflict, changes and challenges he saw during his three-year term.

He spoke of the pandemic, “a long season of unrest in our cities,” a contentious presidential election as well as “deepening political, economic and cultural divisions,” war in Europe, a refugee crisis, and “the overturning of Roe v. Wade.”

He raised alarm over what he saw as a U.S. society moving “hard and fast toward an uncompromising secularism,” adding that “traditional norms and values are being tested like never before.”

But “it is not inevitable that our country will fall into secularism. The vast majority of our neighbors still believe in God,” he said. “Tens upon tens of millions of Catholics still serve God every day, and we are making a beautiful difference in the life of this country. 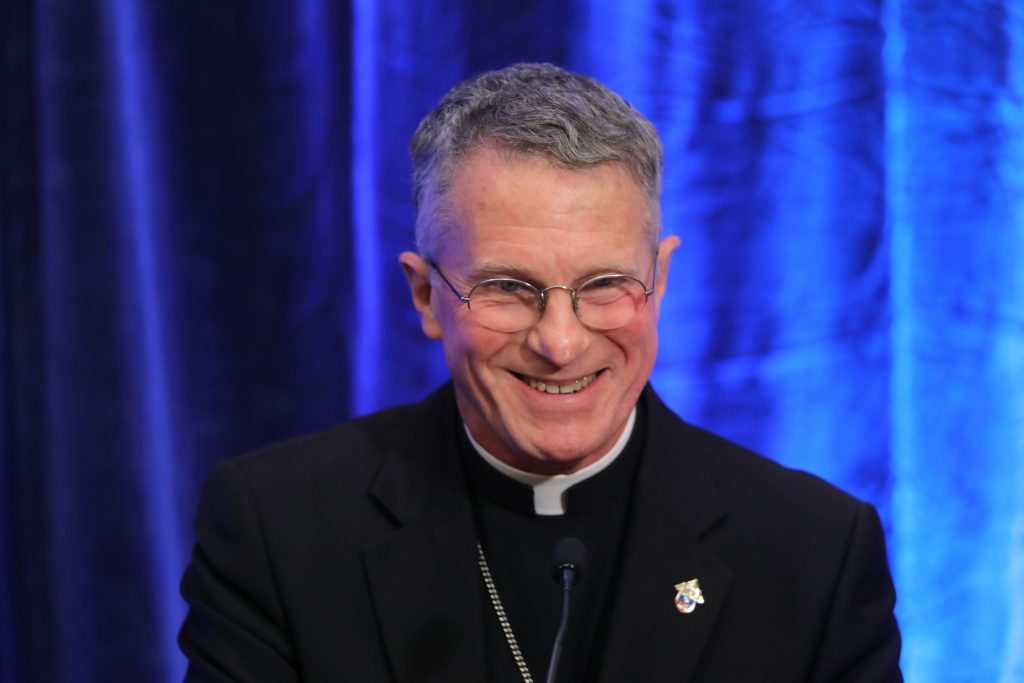 Archbishop Timothy P. Broglio of the U.S. Archdiocese for the Military Services, smiles during a Nov. 15, 2022, news conference after being elected president of the U.S. Conference of Catholic Bishops during the fall general assembly of the bishops in Baltimore. (CNS photo/Bob Roller)

In their elections, the bishops chose Archbishop Gomez’s successor – Archbishop Timothy P. Broglio of the U.S. Archdiocese for the Military Services. He was elected from a slate of 10 nominees, winning with 138 votes. 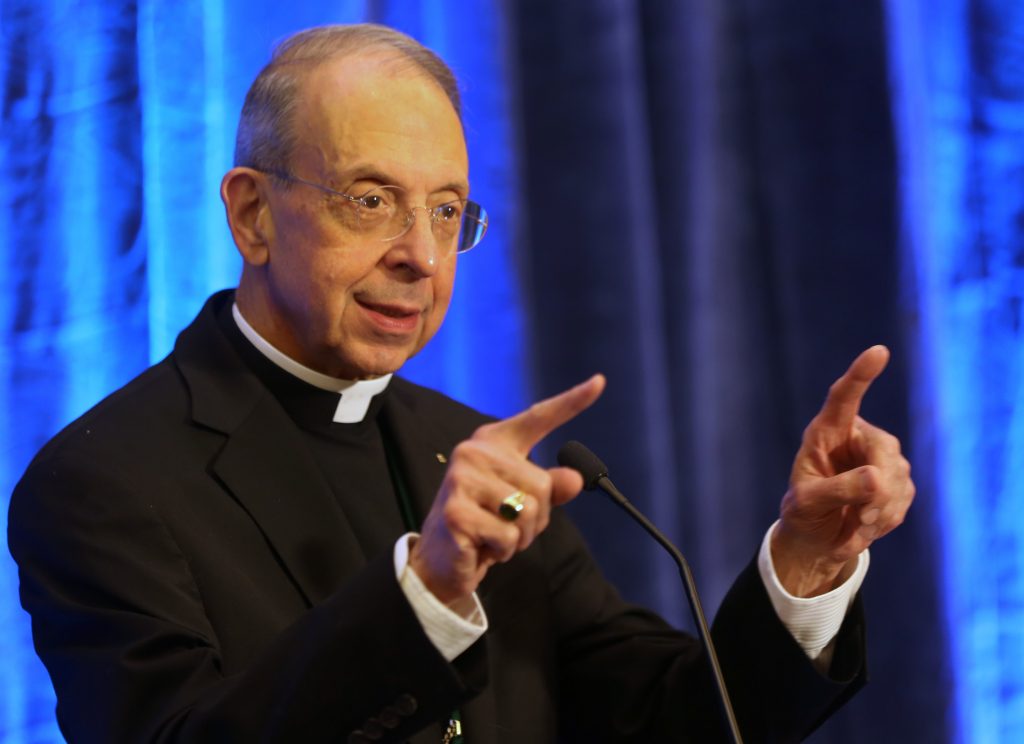 Baltimore Archbishop William E. Lori, chairman of the U.S. bishops’ Committee on Pro-Life Activities, speaks during a Nov. 15, 2022, news conference at a session of the fall general assembly of the bishops in Baltimore. Archbishop Lori was elected the new vice president of the conference during the assembly. (CNS photo/Bob Roller)

In subsequent voting, Archbishop William E. Lori of Baltimore was elected USCCB Vice President. He won the post on the third ballot by 143-96 in a runoff with Bishop Kevin C. Rhoades of Fort Wayne-South Bend.

Archbishop Broglio told reporters a few hours after he was elected that he is willing to meet with public officials, including President Joe Biden, to discuss public policy issues of concern to the Church.

“I don’t see my role as political, but if there is any way to insert the Gospel into all aspects of life in our country, I certainly will not miss any occasion to do that,” he said, adding that Archbishop Gomez had desired to meet with Biden, but that such an opportunity did not present itself since Biden’s election two years ago.

“I intend to continue the good work that Archbishop Gomez began, I think, by giving us a good example of listening but then of leading. I think I will just try to continue in that same vein,” Archbishop Broglio said.

The afternoon public session ended with an acknowledgement of the 20th anniversary of the drafting and passage of the “Charter for the Protection of Children and Young People,” with prayer and reflection led by Cardinal Joseph W. Tobin of Newark, New Jersey.

The prelates also heard poignant remarks from Mark Williams, a survivor of sexual abuse by a Catholic priest. He told the bishops he was “grateful and encouraged by the work you are doing to rid abuse from our beloved Church.”

Bishop James V. Johnston Jr. of Kansas City-St. Joseph, Missouri, outgoing chairman of the Committee on the Protection of Children and Young People, said the past 20 years have been a time of growth, awareness, examination and conversion as the church has worked to provide a safe environment and restore justice.

During their public sessions Nov. 15 and 16, the bishops heard several reports, including on:

— Preparations for the next October’s world Synod of Bishops on synodality:

— The ongoing war in Ukraine:

Because he was elected USCCB vice president, Archbishop Lori’s term as Pro-Life Chair ended. Bishop Michael F. Burbidge of Arlington, Virginia, was elected his successor as chairman on Nov. 16.

Among liturgical action items before them, the bishops approved English and Spanish versions of “Lay Ministry to the Sick,” a collection of texts taken from other liturgical books. They also approved new Mass texts for the feasts of Our Lady of Loreto (Dec. 10) and the recently canonized St. Paul VI (May 29).

The approved texts now advance to the Vatican’s Dicastery for Divine Worship and the Sacraments for a “recognitio” before they can be used in the United States.

The bishops also voted on Nov. 16 for chairmen-elect of six standing committees, including Bishop Rhoades for the Committee for Religious Liberty. Each chairman-elect will begin their three-year term as chairmen at the end of the 2023 fall general assembly.

The bishops also gave their assent in voice votes to the advancement of three sainthood causes:

— Mother Margaret Mary Healy Murphy, founder of the Sisters of the Holy Spirit and Mary Immaculate, the first order of women religious in the state of Texas.

— Cora Louise Evans, a California laywoman who was a wife, a mother and possible mystic.