Frassati is an internationally utilized type of parish-based young adult ministry, based on the charism of Blessed Pier Giorgio Frassati and consisting of young adults who strive to grow in their Catholic faith, together. Fort Wayne Frassati, which meets at Our Lady of Good Hope Parish, is a particularly active Frassati group that meets monthly for meditation, fellowship and Christian activities suited to their age and lifestyle. Some are married, others are single; but all of them seek to enhance their daily lives by offering them up to the Lord and growing closer to God. 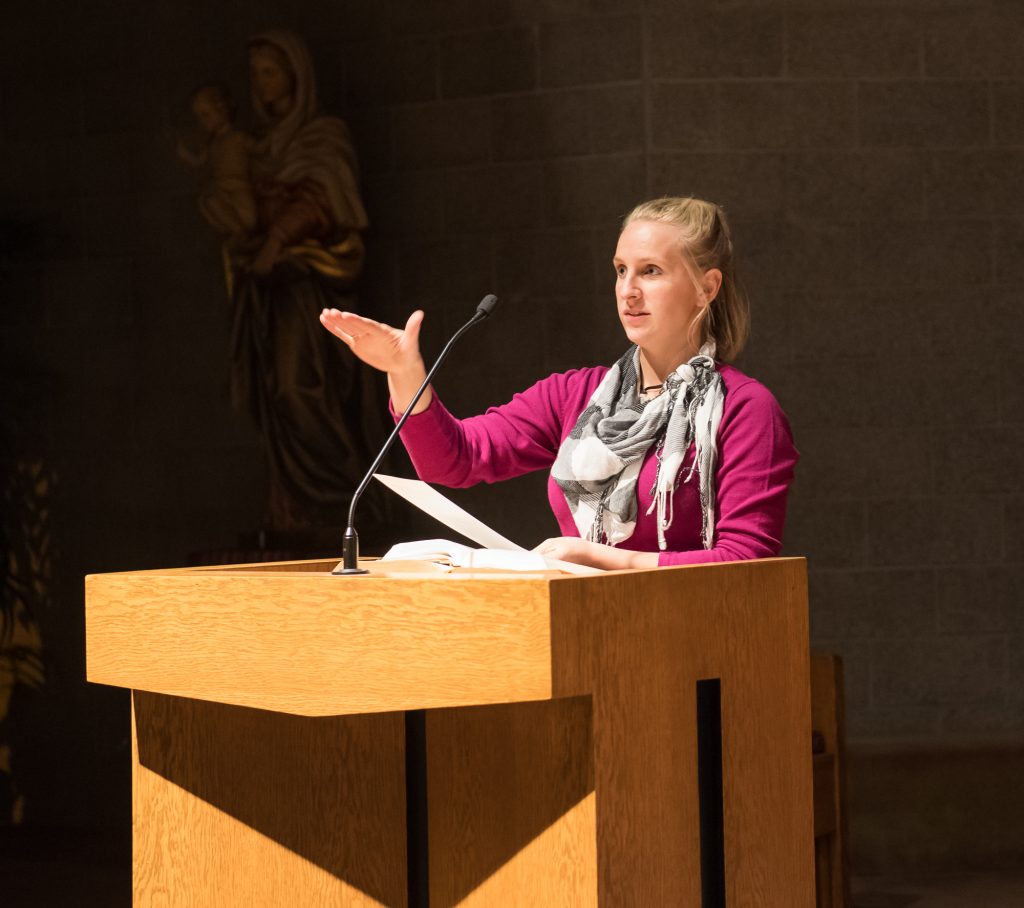 Monica Bodien, co-director of the Fort Wayne-area Frassati group, speaks at the beginning of the Holy Hour.

Jacob Laskowski, Frassati co-director, along with Monica Bodien, said that the group was founded five years ago when Arise Together in Christ, a three-year, parish-centered process of spiritual renewal and evangelization, came to an end. The young participants wanted to continue meeting, and formed a Frassati group with the goal of enriching their spiritual lives even more. Now, gatherings held on the second Wednesday of each month at the church draw 20 to 30 attendees ages 18 to 35. They open with a Holy Hour — exposition of the Blessed Sacrament, meditation and confession — then close with refreshments and social time.

On Nov. 8, Bishop Kevin C. Rhoades offered the evening’s meditation on the subject of suffering. He said it is a question asked by believers: “Why suffering?” 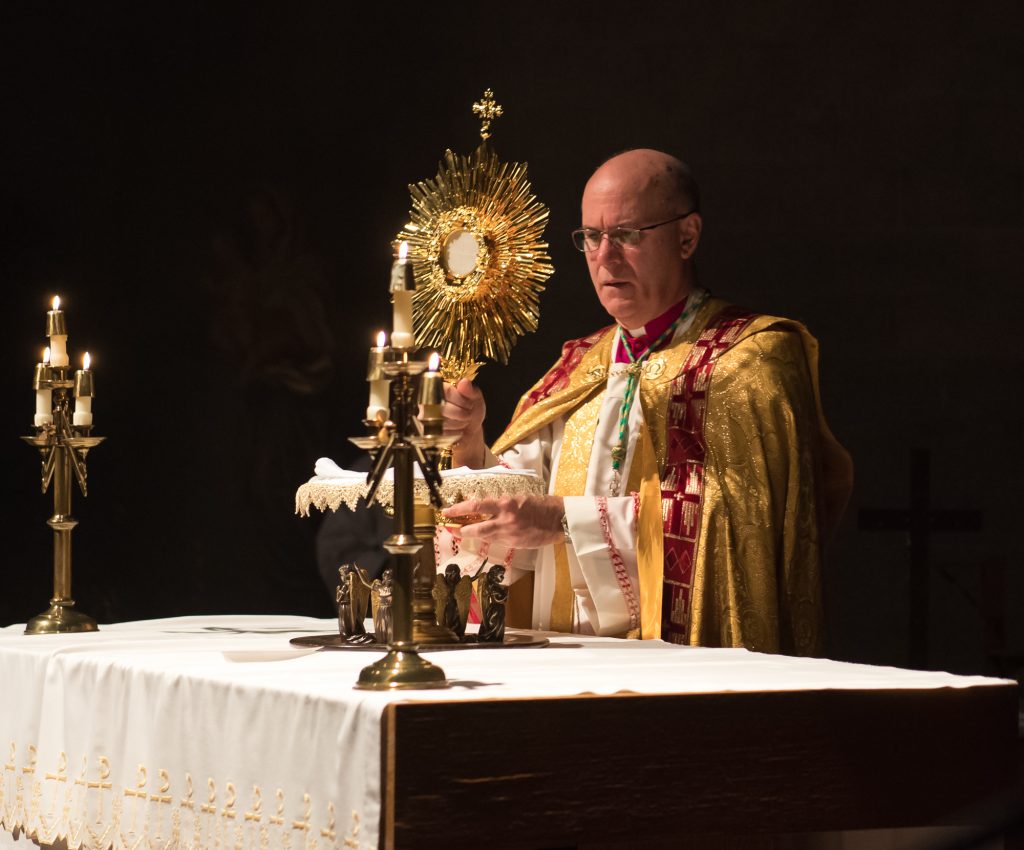 Bishop Rhoades prepares to display the body of the Lord in a monstrance for Adoration.

The question is an expression of anguish within ourselves, which can be physical, mental or spiritual; but its meaning can be found in the suffering of the Son of God, he explained. Jesus took all human suffering on Himself and used it to accomplish the work of salvation. He told the listeners to offer up their suffering to God for the redemption of the world, through His power. When one thinks of suffering as having redemptive power, it brings interior peace and spiritual joy, he added.

The spiritual director of the Frassati group at Our Lady of Good Hope is the parish’s pastor, Father Mark Gurtner. Though unable to attend, he commented by email that the group had been started by the young parishioners themselves, and that he has been happy to support it. “It has really grown. What is especially great to see is how focused on the Holy Eucharist they are. Nearly all their activities incorporate some time in prayer before the Blessed Sacrament,” he said. 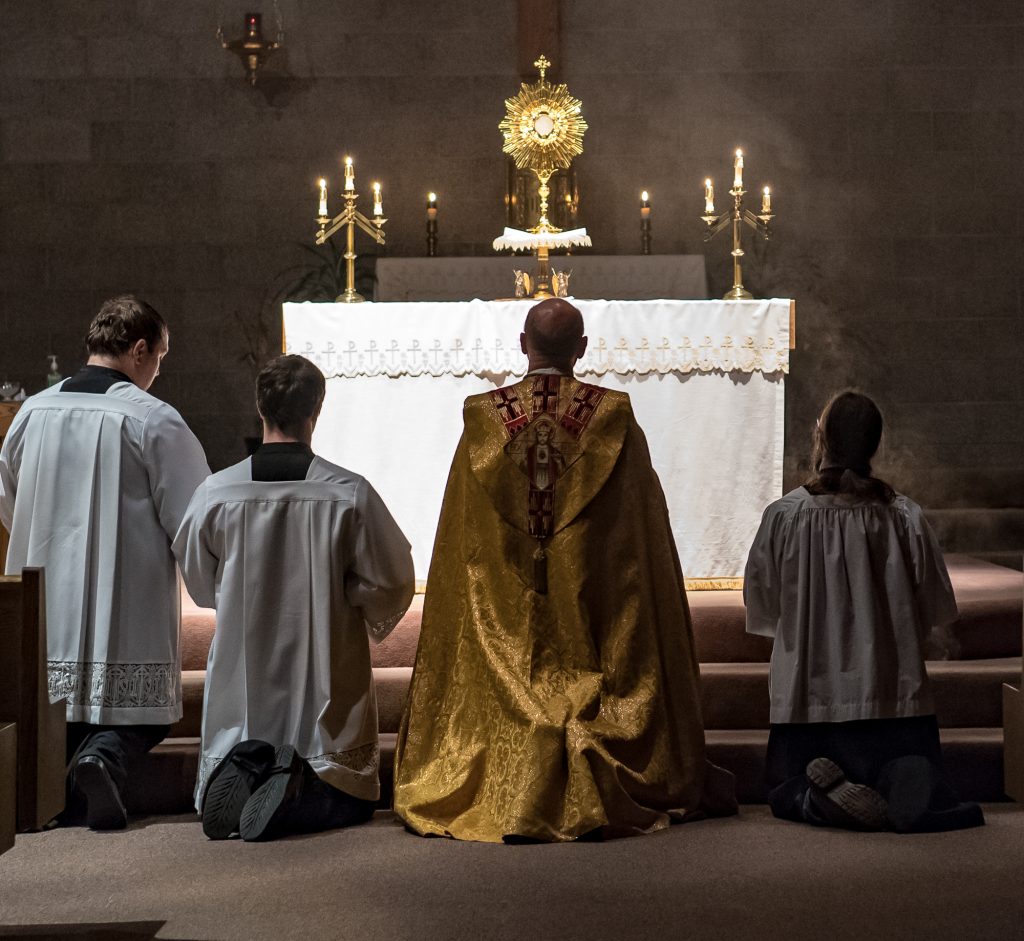 Bishop Kevin C. Rhoades kneels before the exposed body of Christ during a Holy Hour that took place at Our Lady of Good Hope Church Nov. 8, with members of the Fort Wayne-area Frassati young adult group. — Photos by John Martin

The group’s patron, Blessed Pier Giorgio Frassati, was born in Turin, Italy, in 1901. His mother was a painter, his father a newspaper founder who was influential in Italian politics and served as a senator and ambassador to Germany. Young Pier joined the Marian Sodality and the Apostleship of Prayer at an early age and obtained rare permission to receive daily Communion. He developed a deep spiritual life that centered on the holy Eucharist and the Blessed Virgin. He joined the St. Vincent de Paul Society and began serving the sick and the needy, caring for orphans and assisting servicemen returning from World War I, during his teen years.

As a young adult, he joined the Catholic Student Foundation and Catholic Action and gave what little he had to the poor. He helped organize the first convention of Pax Romana, an association that worked to unify all Catholic students throughout the world to work for world peace. He was strongly anti-Facist and defended the faith in Church-organized demonstrations, while rallying other young people to his cause. Unfortunately, Blessed Frassati contracted polio before graduating from university and died at the age of 24. His funeral was said to be “a triumph,” with mourners lining the streets: They were the poor and needy, whom he had served so unselfishly during his young life. Most had no idea he was the scion of an influential Italian family.

St. Pope John Paul II, after visiting Frassati’s tomb in 1989, said, “I wanted to pay homage to a young man who was able to witness to Christ with singular effectiveness in this century of ours. When I was a young man … I was impressed by the force of his testimony.” When he beatified Frassati the following year, the pope called him a “Man of the Eight Beatitudes,” something fitting for the young people today who follow his example in their daily lives.

Laskowski noted that Frassati’s purpose is to help identify the struggles of young people and show them that the source of their strength is the Eucharist. “This age group is reaching out to the sacraments in a beautiful way,” he noted.