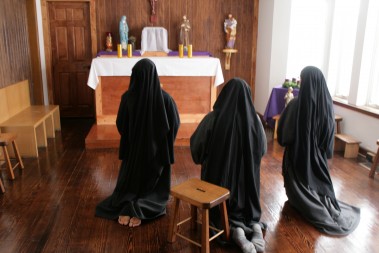 Franciscan Sisters Minor Sister Stella Francis, Sister Mary Clare and Sister Tina Audrey pray before the Blessed Sacrament in the Our Lady of the Angels Convent chapel at Providence House in Fort Wayne. The nine-member community serves the St. John the Baptist community through door-to-door evangelization and volunteer service where needed.

FORT WAYNE — A light shines every morning at 4:20 a.m. in Providence House behind St. John the Baptist Church in Fort Wayne. That’s when the nine members of the Franciscan Sisters Minor, who live in the austerely furnished Our Lady of the Angels Convent, rise to begin their day of prayer and service.

The Franciscan Sisters Minor is a community of religious women, ranging in age from 20 to 70-ish who are in various stages of religious formation. Each member professes vows to live a life of poverty, chastity and obedience.

The sisters live a spartan lifestyle, according to the 1536 Capuchin Constitution, known as the primitive observances of St. Francis, with no modern conveniences such as phones, computers, refrigerators or cars. They rely, says Boston native Sister Mary Clement Turcotte, the foundress and mother superior of the decade-old community, on Divine Providence.

The community was formed in 2000 by Sister Mary Clement, who after 38 years of serving as a sister of the Daughters of St. Paul in Rhode Island, saw a need to evangelize in a more personal way. They moved to Fort Wayne in support of the Franciscan Brothers Minor in August of 2010.

Sister Mary Clement says, “The need I saw was to deepen and encourage the interpersonal relationship between the Church and the person.” The centerpiece of the mission of the Franciscan Sisters Minor, she adds, is door-to-door evangelization.

“The persons we meet are the agenda. The media is conversation,” says Sister Mary Clement. “The visits are casual, laid back and friendly. But these are not social visits. The people convey their spiritual concerns that the sisters can address.”

With evangelization as the centerpiece, prayer is the foundation of all their work. Upon rising in the early hours of the morning, the sisters gather for several hours of prayer in their in-house chapel, from Exposition of the Blessed Sacrament and Office of Readings to Morning Prayer and Mass. Afternoons are filled with duties such as laundry, cooking and assorted chores, class work and the evangelical apostolate. The sisters pray again in the evening as well, completing eight hours of devotion to God each day.

Each sister has a compelling background that inspires a true sense of God’s call on her life. Sister Mary Clare Smith, a native of Rhode Island, has been a Franciscan Sister for 10 years and is vicar within the community. After 32 years of marriage, during which she raised six children, and seven years of widowhood, Sister Mary Clare felt a powerful call to religious life. In her search for her vocation, she met Sister Mary Clement, who had recently received permission to form the new community. The Franciscan Sisters Minor seemed a perfect fit and in January of 2001 Sister Mary Clare joined as one of the foundational members.

Her children are happy that she has found fulfillment in Christ. Her youngest daughter said though she was concerned she would not be nearby for her grandchildren, “She needed the witness of my life,” says Sister Mary Clare. “They can all see the grace of a vocation.”

Of the lifestyle she says, “Poverty is very freeing. I feel I’ve been a servant all my life. Marriage and parenthood have prepared me for this life.”
The sisters dress in simple handmade woolen habits tied at the waist with a cord. They veil their heads and typically walk in bare feet unless the weather calls for sandals or boots. Laundry is all done by hand. Referring to their attire, Sister Mary Clare says, “This is a penitential life. We came here to do penance for ourselves and for the world.”

Massachusetts native Sister Stella Francis Belonger entered the community three days after her high school graduation, six years ago. She is considered a junior after three and a half years of temporary profession and is the director of the apostolate under the direction of Sister Mary Clement.

“It is a beautiful life. We get in touch with our spiritual motherhood. People open their hearts to us and talk about the most important things to them. It’s such a gift to us — and the people,” she says of the door-to-door evangelization she directs.

The sisters do not run any programs but are open to assisting anyone that requests their help, particularly those at St. John the Baptist Parish.
“We can’t do a lot for people, but we can do everything we can do,” says Sister Mary Clement. The sisters have been known to cook a meal for a hungry visitor, fold 3,000 brochures for a church event and assist the parish in their religious education program, as altar server trainers, cleaning church linens and anything else that is needed.

The Franciscan Sisters Minor community acquires new members by word of mouth. “We don’t recruit,” says Sister Mary Clement, adding that they assist each interested woman in discerning where best to serve God. After a woman visits, the sisters leave a return visit as her choice. Anyone may visit and spend the day shadowing the sisters at any time.

Final words for anyone interested in religious life. “Come for a visit,” says Sister Mary Clement, who adds, “It’s a beautiful life and freeing! It’s rewarding to know you are doing the will of God.”

For more information on the Franciscan Sisters Minor contact St. John the Baptist Parish at (260) 744-4393.