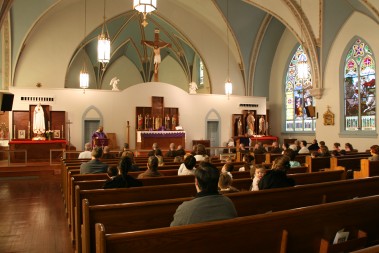 Father David Mary Engo preaches his homily at morning Mass in the newly renovated St. Andrew Church. The original paint colors and decals were maintained and refurbished by local painters. The pews were a gift from St. Anthony of Padua in Angola.

FORT WAYNE — A visit to St. Andrew Church on New Haven Avenue in Fort Wayne may hold a delightful surprise. The church, having sat empty since its closing in 2003, fell into disrepair, with peeling paint and weathered flooring. But with the arrival of the Franciscan Brothers Minor in March of 2010, that all changed.

Father David Mary Engo, superior of the ever growing community of friars, says he was amazed at St. Andrews’ buildings when he first came to Fort Wayne. “I was surprised at the beauty of the church and how everything fit into the charism of our group.”

The Franciscan Brothers Minor live a life of austerity and prayer based on the 15th century teachings of their benevolent founder St. Francis of Assisi. And like their patron saint, though the church and rectory, now known as Our Lady of the Angels Oratory, was in disrepair, the brothers determined that they would “repair the church and get it functioning.”

The initial plan, after funds were raised, to paint the interior of the church building entailed chipping the peeling paint away on scaffolding that took the inspired painter Don Krauss and his two sons to the heavens. Father Engo says, “They scraped and painted maintaining the original colors and decals.”

Subsequently, a week was spent working on the sanctuary floor, while Bob Shutt handcrafted the communion rail. The Brothers Minor worked together to build the side and main altars, with the assistance of Greg Gruss, who oversaw the physical construction there. Eventually, carpet was removed, and floors were sanded and stained by Vince Tippmann and the friars, after which the detailing work, including placing the altar and molding around the church, was finished. “Then we had two days of cleaning,” says Father Engo, adding with his quick wit, “And two days to clean ourselves up!”

The brothers were delighted to receive the gift of beautiful fine wood pews from St. Anthony of Padua in Angola which filled the church by the end of January.

The church hosts a number of ornate statues that Father Engo reports have traveled to them from all over the world. The Our Lady of Fatima likeness comes from Portugal, the St. Anthony and St. Therese statues were a gift from St. Aloysius Parish in Yoder, and the beautiful statue of St. Francis that adorns the church is from St. Joseph-Hessen Cassel Parish.

One of the statues, a life-size rendition of St. Michael, was purchased with funds raised by nine-year-old Michael Garrett who fondly supports the Franciscan Brothers Minor. And Bishop Dwenger senior Daniel Weiss is handcrafting a statue of St. Felix of Cantalice for the newly-decorated church.

Father Engo feels blessed to have this building to offer daily Mass, except on Sundays, for the neighboring Catholics. “We don’t have Sunday or holy day Mass so people will go to their own parishes,” says Father Engo. Mass schedule includes Monday, Tuesday, Wednesday, Friday and Saturday at 7:45 a.m. and Thursday Mass at 8:30 a.m., followed by a prayer vigil for life across from the area abortion clinic. The brothers also offer first Saturday devotions in the church at 9 a.m., followed by Eucharistic Adoration and Confession. The church is also used for high school retreats, youth group meetings and Eucharistic Adoration. Father Engo says, “Everyone is welcome.”

Because this church is the community’s motherhouse, Father Engo says it will be the site of the May 31 Mass for First Profession of Vows. Seven of the 16 brothers will be the community’s first class of novices who will make their temporary vows at the special Mass that will be celebrated by Bishop Kevin C. Rhoades. These seven men have been living and studying within the community for a year and a half being trained in the Franciscan life. They are Brothers Leo Maria, Pascal Mary, Juniper Mary, Felix Marie, Lawrence Mary, John Paul Mary and Giles Mary, each of whom will commit to a life of poverty, chastity, obedience and total consecration to Mary for the next three years. “The significant part of this is they are the first to take vows. It is a foundational moment for us,” says Father Engo. 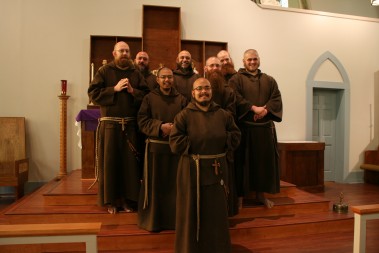 Seven Franciscan Brothers Minor have been trained in the Franciscan life for a year and a half and will profess temporary vows at a special Mass celebrated by Bishop Kevin C. Rhoades in the restored St. Andrews Church on May 31. They are, in front, Brother Leo Maria, second row, Brothers Pascal, Juniper Mary, Felix Marie, Lawrence Mary and third row, Brother John Paul Mary, Father David Mary Engo and Brother Giles Mary.

To signify this commitment to the Franciscan life, these men will don belted cords with four knots symbolizing the four vows they professed and remove the capome, or novice hood from their habit. Their place in the community, says Father Engo, will change as well. “They will be engaged in a more regular life as friars. They will be in active ministry rather than just in classes in formation,” he explains.

Also included in the evening of celebration will be Solemn Vespers followed by the Rite of Investiture of the third class of novices, who have been living and studying in the community for six months or less. Father Engo says the postulants will receive their habits, new names and become novices. The Franciscan Brothers Minor community has doubled its numbers since its move to Fort Wayne and have an additional 51 men who are “seriously discerning” this vocation.

As the flourishing community grows in numbers, Father Engo’s vision for Our Lady of the Angels Oratory continues to expand. “The next phase? The Knights of Columbus from St. Joseph-Hessen Cassel have committed their time and efforts to repair the church hall,” he says. That will include a functional kitchen, addition of two classrooms and applying wood paneling along the walls. Father Engo also hopes to begin construction on a hermitage site for the brothers’ use in silent retreat.