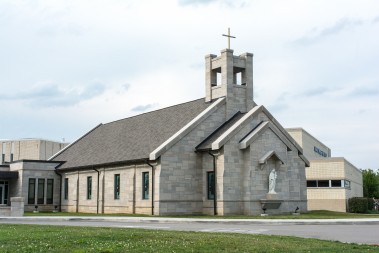 Four of the five seminarians who, with the blessing of Bishop Kevin C. Rhoades, will become deacons on May 20, have an unusual connection: Thomas Zehr, David Huneck, Nathan Maskal and Patrick Hake all graduated from Bishop Dwenger High School, Fort Wayne, in the same year, 2009. Something even more providential, according to Zehr’s father, was that even though each man took time off at some point during his religious journey, and then resumed the path, it worked out so that they will still share the same ordination dates.

Speaking to the not-often-seen convergence of four calls to the priesthood from the same class of students, Principal Jason Schiffli said: “‘You will know them by their fruits.’ (Matthew 7:16-20). The four Dwenger alum who will take their vows into the diaconate were friends, and were heavily involved as high school students. They were well-liked. They were student leaders, making great impressions on their peers and underclassmen. They have each left us with fond memories and indelible marks of achievement for those to aspire and to emulate.”

The connection among the four began long before high school, and as early as grade school.

Hake, Huneck and Zehr were in the same Life Teen program at St. Vincent’s/Our Lady of Good Hope, where they became good friends. Hake and Huneck had gone to grade school together, and Maskal and Hake were both in concert band. Maskal explained: “Patrick sat right behind me in almost every band class, and I quickly became close friends with him. He also began to attend the weekly rosary at the abortion clinic, so we began to pray together as well,” Maskal continued, “This is where I say Patrick’s zeal for his faith shined: a zeal for catechesis and teaching people about his faith that he continues to share today. Patrick and I also began a rosary-making group to make knotted rosaries: initially black corded rosaries to donate to the military, but later for various other needs as well. Today we still use rosaries that we made ourselves.

“I probably first met David in Scrabble club. We were about the same skill level, so we would constantly be challenging each other to Scrabble matches.”

The call to enter the seminary and discern the priesthood came at different times for the four. “The thought of priesthood had been in the back of my mind for most of my life,” said Zehr. “But I think a key event was during a Life Teen retreat in high school where I was helping Father Mark Gurtner with adoration and benediction. Being at his side as he was doing a beautiful priestly act was very moving, and made me want to look deeper into what priesthood is.”

Hake and Maskal thought that they were being called during their sophomore year, while Huneck first began to think about seminary when he was a junior.

Although they were setting out on the same journey, the friends say they did not really discuss their calling with the others. “I knew this was my calling. Every now and then I would doubt, but ultimately I never abandoned that path,” said Zehr.

Hake was initially less prepared to accept God’s whisper. “I didn’t want to be different in high school, so I ignored that first call and didn’t even talk to a priest about it,” he said. “I ended up going to college, where after trying to find happiness my own way and not finding it, I went back to those first thoughts of being a priest. I told God I’d go for only one year and if I wasn’t happy I’d leave. So one year passed and I was happy, so I told God I’d stay for only one more year and if I’m not happy I’d leave. And so on and so, on until I am on the verge of receiving holy orders.”

Maskal recounted: “Throughout the last year or two at Dwenger, Thomas Zehr and I were fairly actively discerning a call to the priesthood. Although we did not share every new development with each other, we were quite supportive of each other.”

Huneck, like Hake, went on to college. “While in high school, I thought about entering after graduation but instead went to Ball State for two years. What caused me to apply was, I couldn’t get the thought of being a priest out of my head. I had to give it a shot.”

The men’s decisions to say “yes” to God’s calling them to ultimately serve the church as a priest developed over time, through the influence of many-priest and laity alike. The calling did not strike like a lightning bolt; rather, it grew over time as their relationship grew with God. Hake advised: “If you think there is a 5 percent chance God is calling you to the seminary, talk to your pastor and the vocations director, Father Andrew Budzinski, about it. What’s the worst that can happen? You go to seminary, grow closer to God, and ultimately become a better man.”