Two-thirds of them were first-generation Americans, the sons of men and women who came to the United States as immigrants seeking a better life.

They represented a range of professions, from plumber, construction worker and railroad conductor to physician, pharmacist and bank president. Some endured dangerous working conditions, and all faced discrimination because of their Catholic religion.

United by their faith and a desire to improve life for their families and community, 36 men signed a charter Oct. 15, 1899, to found Knights of Columbus Council 451 in Fort Wayne.

The Catholic social and fraternal organization was the first K of C council in Fort Wayne, the second statewide, and the root of K of C councils now involving about 5,000 men in 22 parishes in northeast Indiana. 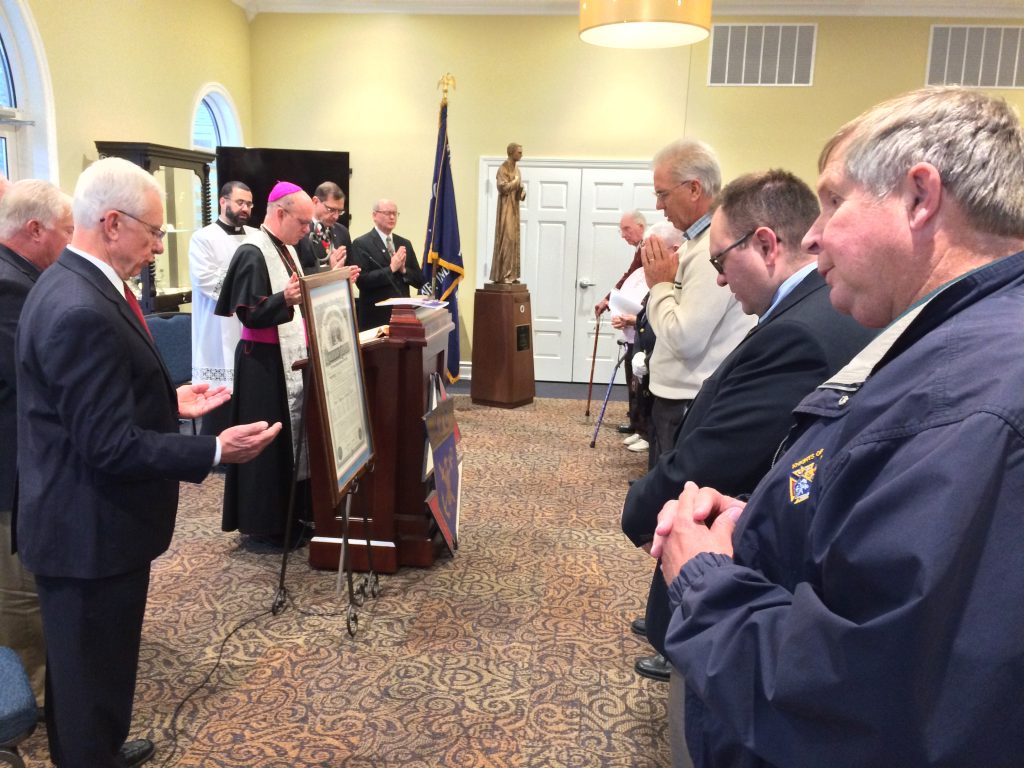 Bishop Kevin C. Rhoades of the Diocese of Fort Wayne-South Bend leads a prayer during the Founders Day ceremony Oct. 28 at Divine Mercy Funeral Home in Catholic Cemetery in Fort Wayne. The event honored the 36 charter members of Knights of Columbus Council 451, the first K of C council in Fort Wayne. Steve Lutz, Founders Day project chairman, is at front left, and Jerry Hake, a member and past Grand Knight of K of C Council 13971 at St. Patrick Catholic Church in Arcola, is at front right. — Photos by Kevin Kilbane

Local K of C members commemorated that heritage with a Founders Day celebration Oct. 28 at Catholic Cemetery, 3500 Lake Ave., where 29 of the 36 Council 451 founders are buried. About 100 people turned out for the event, which took place in the cemetery’s Divine Mercy Funeral Home because of the morning’s cool, rainy weather.

Bishop Kevin C. Rhoades, who is a Council 451 member, offered prayer and remarks at the ceremony. Event organizers also encouraged people to visit the graves of Council 451 founders, which were identified with a K of C marker and yellow or blue balloons.

The K of C focuses on four principles: charity, unity, fraternity and patriotism.

In the late 1800s, some social and fraternal organizations didn’t allow Catholics to join, said Lutz, a past grand knight of Council 451 and a current trustee. Catholics faced even greater threats during the 1920s from the Ku Klux Klan.

Genealogy research by five Council 451 members and one of their spouses provided a glimpse of Council 451 founders’ lives: 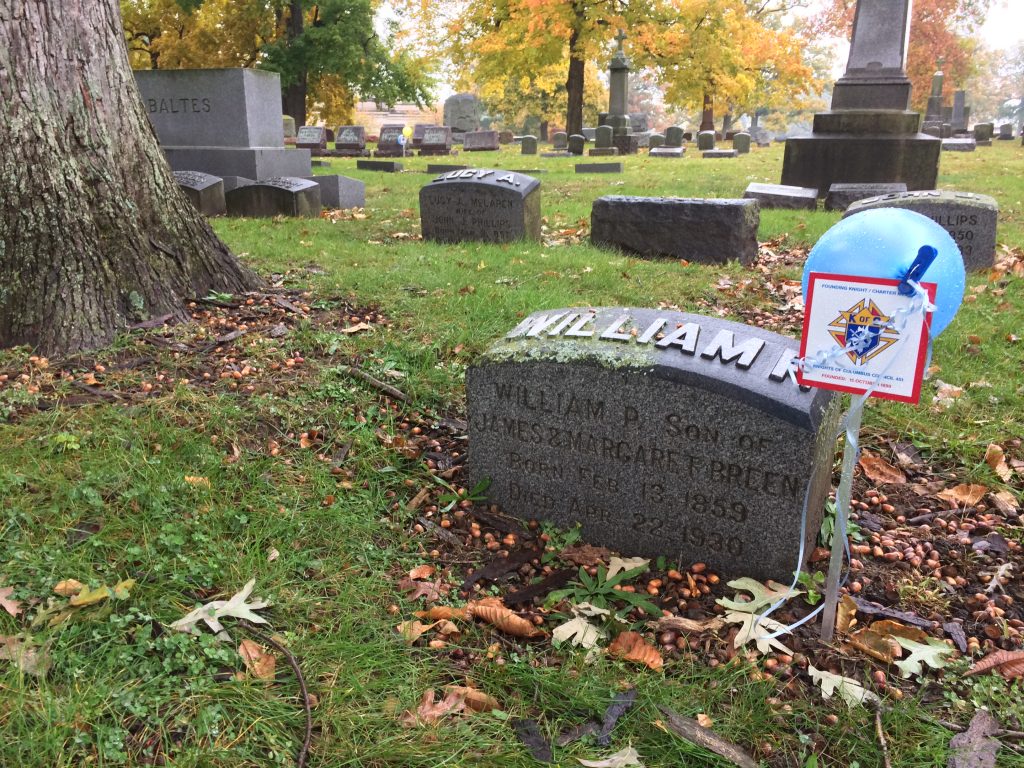 A Knights of Columbus marker and balloon identified the grave of William P. Breen in Catholic Cemetery in Fort Wayne Oct. 28. Breen was among the 36 charter members of K of C Council 451 — the first council in Fort Wayne — who were honored during a Founders Day ceremony held at the cemetery and Divine Mercy Funeral Home.

They worked hard, with many operating their own businesses or professional offices. Gerhard B. Grimme, for example, bought his father’s tailoring and dry-cleaning business and renamed it Peerless Cleaners, which still operates in Fort Wayne today.

Some Council 451 founders lived into their late 80s or early 90s, but several met early deaths from disease, accident or injury.

George J. Gerard, a conductor for the Pennsylvania Railroad, died at age 28 in 1906 when he fell between the engine and tender while walking across the top of a train.

“Some of these stories are just so cool,” Lutz said.

Council 451, which now is based at St. Charles Borromeo Catholic Church, began the Founders Day project in January 2017 after asking permission to display a copy of their charter in the church’s gathering space, Lutz said. Members decided they should learn about their council’s founders.

They did most of their historical research at the Genealogy Center of the downtown Allen County Public Library, where library staff provided major assistance, he said.

Council 451 members compiled founders’ biographies into a book, “Faith in Action.” The council had a limited number of books printed; which can be purchased from Lutz at 260-341-7556. A copy also has been donated to the Genealogy Center. Council members hope to post a copy of the book online eventually, so it can be updated to address an unsolved “mystery,” Lutz said. 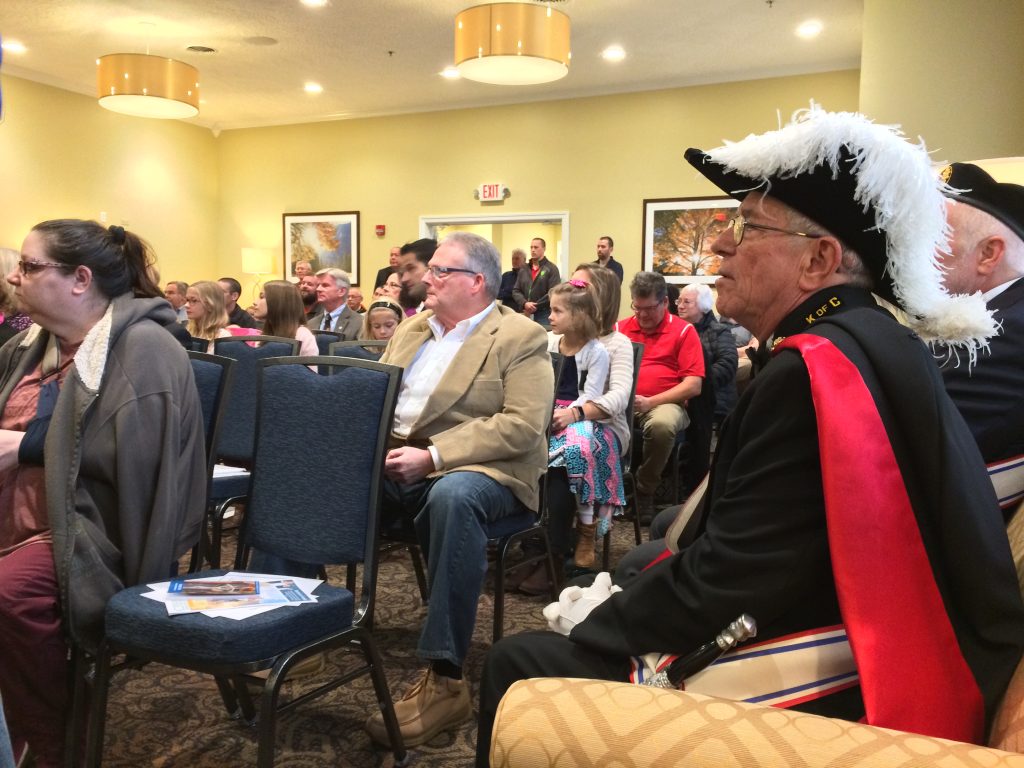 John Murray, front right, in his 4th Degree Knight regalia, listens during the Knights of Columbus Founders Day ceremony. Murray is a past Grand Knight of Council 451.

The charter contains the names of 36 men. However, a local newspaper story written on the group’s 20th anniversary listed 38 founding members, some of whom didn’t sign the 1899 charter, Lutz said.

A 100th anniversary booklet also listed the names of 38 founding members, but some names on that list don’t appear on the 1899 charter or in the 20th anniversary news story, he added.

The project may spark other research, too.

“I’m anxious to find out where my heritage fits in with him,” Rick Stier, Fort Wayne, said of Council 451 founding member Charles J. Stier, who died in 1952.

Stier, who attended the ceremony and belongs to K of C Council 11353 at St. Vincent Church, Fort Wayne, said he wasn’t sure of the family connection, but all Stiers in the area are related.